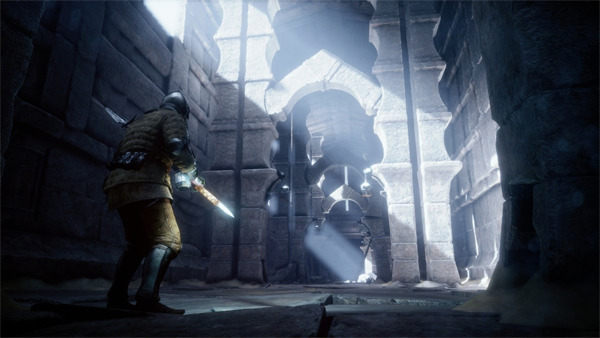 As a new game by Capcom making its debut on the PlayStation 4, Deep Down has garnered quite an interest since its reveal. Initially this was due to the controversy of said footage, which basically seemed like pre-rendered assets overlaid with a user interface mock-up. Now that we’ve gotten new footage from TGS, including the game running in real-time, should we be optimistic or sceptical about its release?

Let’s begin with its business model. Capcom producer Yoshinori Ono has announced that Deep Down will be a free-to-play title with an open beta ready sometime near the PS4’s Japanese launch in February 2014. No further details were shared here, so whether the game will feature a cash shop, content DLCs or a combination of both (this being most likely considering Capcom’s history) will be a matter of debate.

It sort of looks like Monster Hunter and Dark Souls running on an adapted Resident Evil control scheme, doesn’t it? From what we know so far, the caves your party will be exploring are randomly generated. In an interview with Polygon, producer Kazunori Sugiura said that they “came up with this pseudo-random method to ensure that players always had some new excitement, or experience, every time they went into a dungeon.”

Deep Down will have its share of RPG elements too, including character progression and skills, with enemies sporting physical weakness for you to discover and exploit. “For example, enemies that are hollow inside are tough to stab with spears, but a slash from a sword can deal more damage to them. With all these factors, I think the battle system will be pretty deep.”

Capcom had a playable demo at TGS and took the opportunity to livestream the game for a bit. There’s nothing on the Ustream channel now, although YouTube user PlayStation_Genie managed to record the session. Remember that the following video is a capture of a livestream of a demo, therefore not representative of the final product. What it does show, however, is a good idea of what combat looks like.

Since we’re just months away from an open beta the gameplay shouldn’t differ too vastly from what we’ve seen here. It’ll ultimately fall to the game’s long-term content to determine whether there’ll be a player-base at all, but considering how Deep Down is a major Japanese release for the PlayStation 4’s launch, it should have plenty of early-adopters roaming and looting its virtual caves.

Ade thinks there's nothing quite like a good game and a snug headcrab. He grew up with HIDEO KOJIMA's Metal Gear Solid, lives for RPGs, and is waiting for light guns to make their comeback.
Previous post Bluemouth Interactive Brings Astro Gaming and Moga to Asia
Next post Valve Announces Free, Linux-based SteamOS