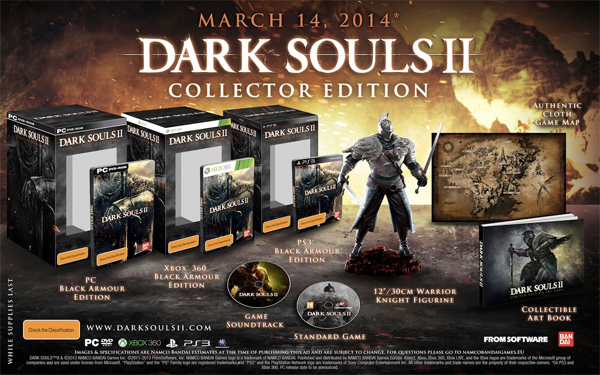 Dark Souls II will be out in March next year. That’s still half a year away but the fans are a dedicated lot, so waiting isn’t that much of a big deal. What is a big deal is that 30-centimetre-tall figurine, which would serve nicely as a physical trophy of your punishing achievements. There’s also this new trailer (uploaded by IGN) for you down below.

For anyone wondering, that’s “Aching Bones” by Nadine Shah. Quite appropriate, don’t you think?

Dark Souls 2 is being developed for the PlayStation 3, Xbox 360 and PC. They haven’t announced a solid date for the PC but are aiming to release in the same launch window as consoles. If anything, this will be a proper, optimal release and not a rushed PC port as was the case with the previous title – that should be some consolation for any potential delay.

Ade thinks there's nothing quite like a good game and a snug headcrab. He grew up with HIDEO KOJIMA's Metal Gear Solid, lives for RPGs, and is waiting for light guns to make their comeback.
Previous post Tokyo Game Show 2013: Ace Combat Infinity Trailer
Next post Hands-On: ASUS Padfone Infinity