South Park: The Stick of Truth Releases This December 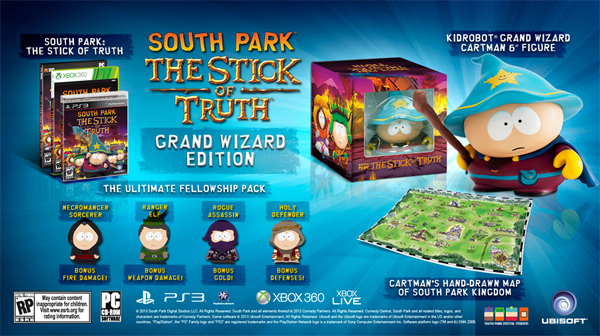 Our awfully long wait for South Park: The Stick of Truth will soon be over! Ubisoft have announced that the Obsidian Entertainment–South Park Digital Studios game will be available on 10 December (US), with a Grand Wizard Edition closely in tow for a 12 December release.

The game introduces you as a new character in South Park. Succeed in your quests and you’ll be hailed as a saviour, earning the friendship of the show’s main characters. Fail, and “you will forever be known… as a loser.”

It’s a good thing Ubisoft picked up support for the game after THQ’s demise; otherwise we’d never have what could possibly be one of the more faithful video game adaptations of South Park we’ve seen.

South Park: The Stick of Truth will be out for the PC, PlayStation 3 and Xbox 360. Is anybody going to be counting Kenny’s deaths?

Ade thinks there's nothing quite like a good game and a snug headcrab. He grew up with HIDEO KOJIMA's Metal Gear Solid, lives for RPGs, and is waiting for light guns to make their comeback.
Previous post Second Valve Announcement Involves Steam Machines, Coming 2014
Next post FIFA 14 Is Out On Mobile Too