Total Wars: Three Kingdoms is a turn-based strategy game with real-time tactics. The game is set during the Three Kingdoms period (220-280) in a shattered China. Factions have popped up all over the place, and it’s up to you to unite China under your rule – or die trying. 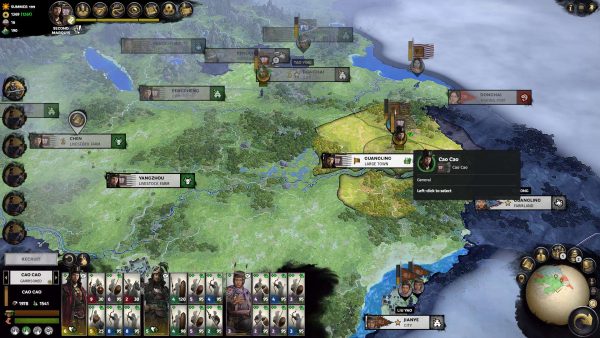 Ironically, war might not always the answer. You’ll want to foster diplomatic relations with agreeable factions in China, so you may grow your little kingdom without having to worry about an attack every other turn. You do this by taking over settlements in large scale battles. Hundreds of troops turn into thousands in the later game, and often you’ll still have to fight tooth and nail for victory even with the largest army you can muster.

Like I said though, it’s not always about war. To ensure long-term success, you must engage in politics and administration and build up your settlements to squeeze every last penny from your citizens. More cash in the banks means bigger armies and more growth. You won’t be slaughtering enemies nearly as much as you slaughter your treasury, turn after turn.

Not quite as difficult as add. maths, but still

I’ve never played a game like this before. As such, I have to mention that there is an extremely steep learning curve attached to the gameplay. This curve only gets steeper if you haven’t played any Total War games, I imagine. The game does have a simple tutorial during the campaign to work with, but I found that I was still confused about 70% of the time anyway. 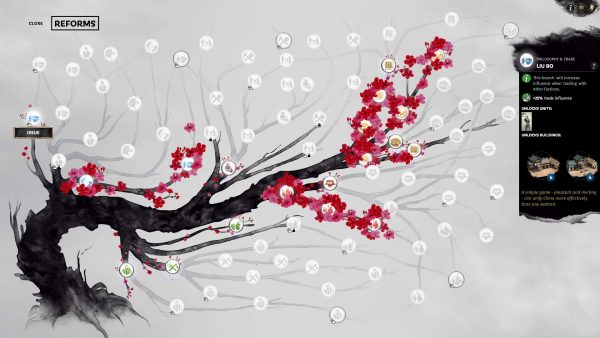 I don’t necessarily see this as a bad thing, though. The game can be extremely overwhelming at first with the sheer breadth of its mechanics and systems, but over time you’ll learn to grasp them and get better at them. I ended up messing up my first campaign so badly after around 5 hours of playtime, that it just seemed easier to start again with another character.

It felt far more rewarding the second time around when I fully knew what I was doing. You feel rewarded this way, and get much better at the game as it goes along. Still, some players might find the beginning too slow and irritatingly confusing and I can’t fault them for that either.

It’s all about the characters

The game has two campaign modes, Romance and Records. Romance portrays the main characters of the campaign as larger than life heroes; essentially superheroes with special abilities. Records on the other hand, is a much more realistic take on the time period. You cannot command generals in battle here, nor do they have powers. I personally liked Romance more, because it’s just awe inspiring to see Cao Cao take 150 different troops out with sheer might alone.

Three Kingdoms didn’t play out like I thought it would. It puts a magnifying glass on the generals of the different factions, enriching them with personality while doing so. They become larger than life characters, with unique voices and attributes. This move is what really makes the game for me. When I grew attached to certain characters in my first campaign, it really hurt to go to war with them during my second. 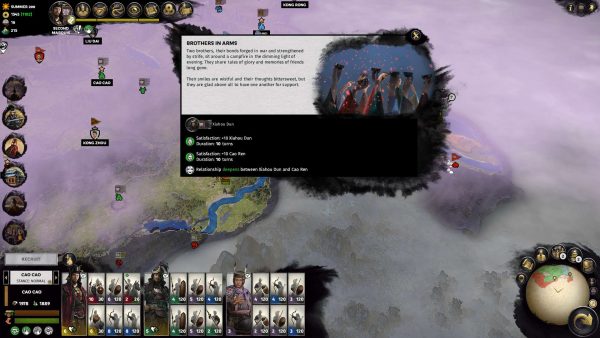 Random events also happen throughout the campaign, often demanding your immediate attention. Sometimes however, it’s merely about generals that grow bonds with one another. These small events are a nice touch, and can actually affect gameplay in significant ways.

If you pair up generals who like and respect each other, they’ll function better in battle. If you pair up characters who despise each other, it might just blow up in your face. Civil wars can happen if you pick the wrong ministers in court. Some characters you recruit might turn out to be enemy spies. Dissatisfied characters might defect at the worst of times. You really have to pay attention to your characters and their goings-on.

A sword day, a red day, ere the sun rises!

Another big part of Total War: Three Kingdoms are the battles. For those seeking massive clashes of armies, this game won’t sell you short. Battles start small and turn huge as the game progresses. Hilariously, enemies will begin talking smack about one another across the battlefield. You can also zoom into your forces below and watch as they grapple with the enemy for victory in big, chaotic battles. 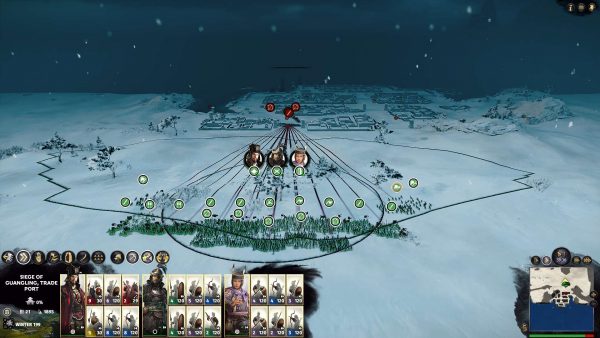 An element of strategy is always required, however. You can choose to flank the enemies, or attack as one whole unit. Melee attackers are best in the frontlines, whereas archers might be best used from the back. The enemy AI can be pretty disappointing here, as they tend to make a lot of illogical decisions in battle that can lead to a short and unsatisfying victory. Combat animations aren’t too great either, but that won’t be a problem unless you spend the majority of your battles zoomed in.

Performance-wise, this game runs like a dream. The only time I noticed framerate drops were during huge battles in the later part of the game, but it’s obvious why that would happen. One exception would be the absolutely terrible load times, which really dampened the experience for me. The game is also extremely pretty for what is, with colours and environments that pop. A great example would be during spring, when the map livens up with colour all around. 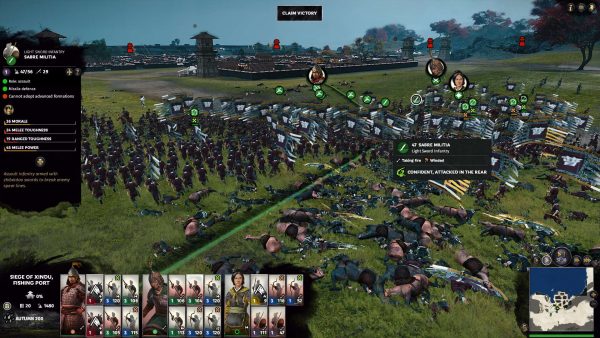 Three Kingdoms is soaked in Chinese culture, and it reflects that from the gong sounds you hear at the end of every turn, to the peaceful music as you upgrade settlements and the excellent voicework and art style throughout. If you’re looking at this game for its historical and cultural components, it certainly won’t let you down.

This game moves like clockwork. Unfortunately, that means that when one gear falls out, the rest stops functioning. It’s the same with this game. If you focus too much on war, you might end up with diminished forces as enemies raid your settlements. If you engage too much in diplomacy, you might end up playing too passively for your own good.

So, what did I think?

All in all, Total War: Three Kingdoms is a delightful strategy game. Soaked in Chinese culture, it offers a unique setting and band of characters you might not be able to find elsewhere. You would definitely be hard pressed to find a game that juggles so many gameplay elements with such ease. This is one of the best games I’ve played this year, and certainly one I’d keep playing for ages to come.

Now would it be too much to ask for a Total War: Middle Earth? 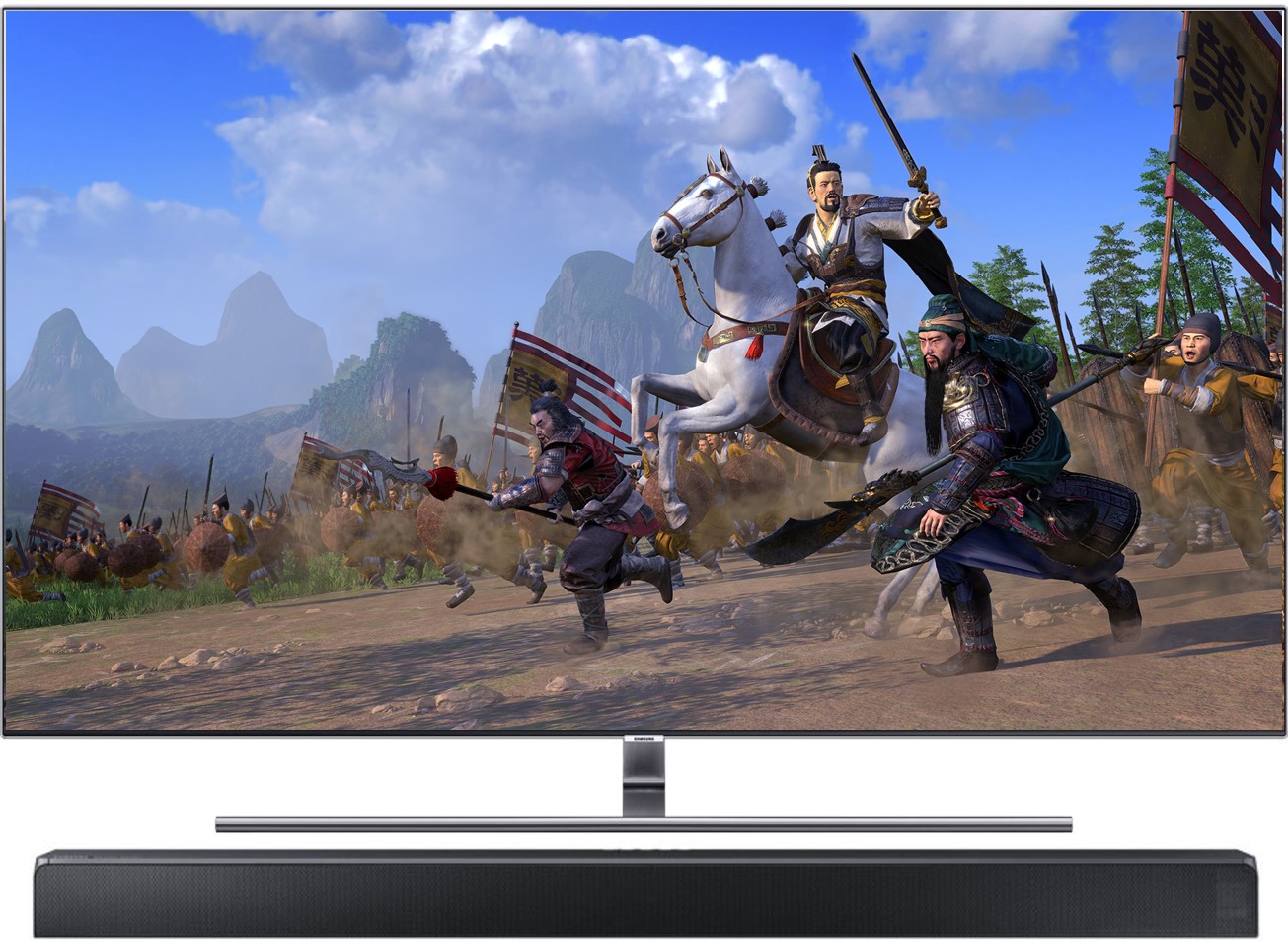 Tim loves all sorts of things. Movies, TV shows, video games, comic books, cats and all that good stuff. What doesn't he love, you might ask? Minestrone soup. It is truly awful.
Previous post Valve apologises for its misleading Summer Grand Prix, gives out 5000 more games
Next post The Cuphead Show! is Netflix’s latest animated series