Review – Breaking the mold with Thronebreaker: The Witcher Tales 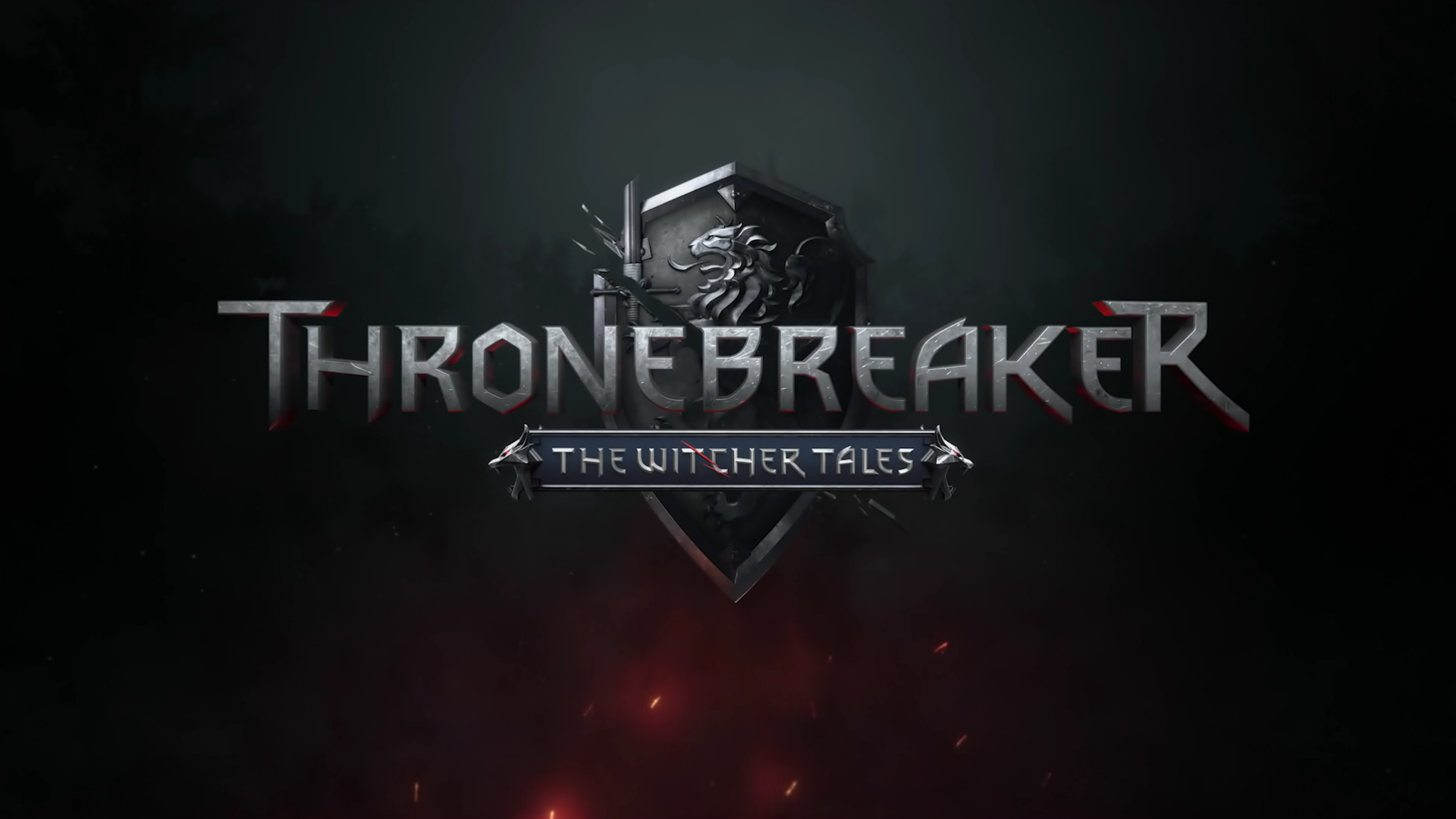 Heavy bolts from Lyrian Arbalests fly across the battlefield felling black-clad Nilfgaardian infantry. That is the scene that plays out in Thronebreaker: The Witcher Tales or at least an approximation of what amounted to my card touting adventures. 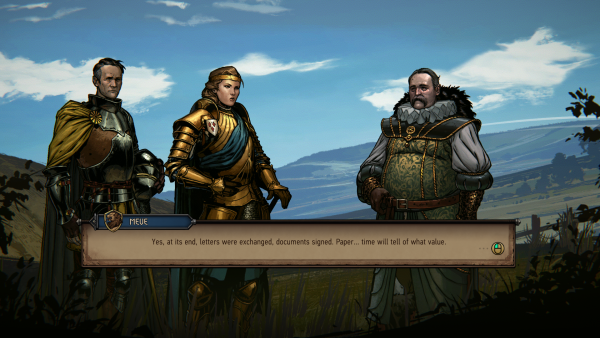 The best way to describe Thronebreaker is that it is a hodgepodge of genres rolled into one. Thronebreaker is a card game, an RPG, an adventure game and even a visual novel. The brilliance of Thronebreaker is how each aspect is expertly woven together, and the gameplay serves to tell the story of Meve.

The world itself is a familiar one to fans of The Witcher, with thatched huts and wooden cabins amidst fields of wheat lining the landscape. CD Projekt RED has chosen to go with a slightly cartoony cell-shaded look for Thronebreaker but that in no way lessens the horror that comes with living in a medieval period filled with monsters. 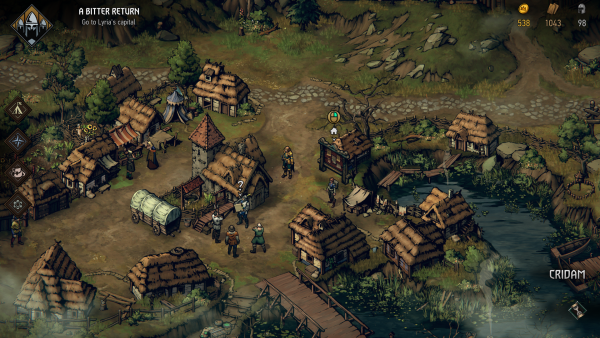 Scattered around this storybook landscape are resources you can find to bolster your war efforts. These resources are often marked by a bright green tinge to indicate that they are interactable once you get close enough. I found this to be a nice touch as they are just the same shade of green as the meteorite powders you see in Gwent: The Witcher Card Game. Probably by design. 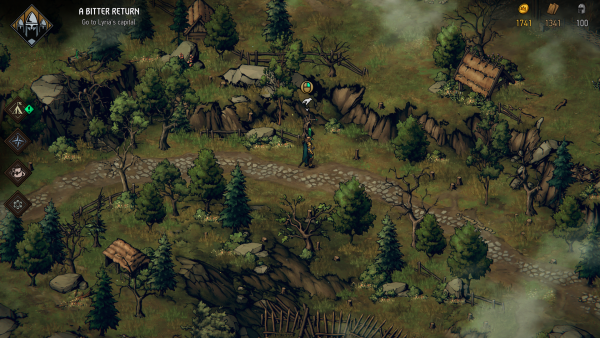 Although the interactable objects are marked out, finding a path to them is a practice in frustration. As a completionist, I made it a point to explore and find every single scrap and bullion I could get my hands on. It is in these greed fuelled explorations that I found myself running in circles trying to figure out a path that would lead me to a treasure chest that mocked me with its golden hue.

I did eventually find a way to that terrible taunting treasure chest by exploring another area. This was mostly due to how the world worked. The explorable world is essentially a large flat isometric plane. As everything is 2D, the only indication of height is done solely by the art of the world, but there are some areas where this difference is hard to spot. 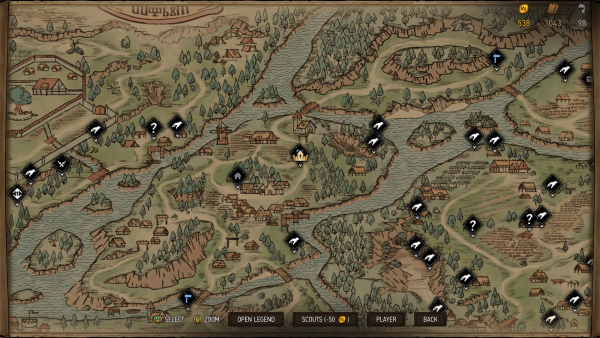 Minor nitpicking aside, the world was still very much a joy to explore due to the colorful cast, puzzles, and events that dot the landscape. All these, as mentioned, add to the story and what a story it is.

The story is told through the perspective of a mysterious storyteller, regaling a group of soldiers. The events we encounter are often in text, which works well with the narrative framing. The events are narrated expertly by the storyteller with each character voicing their own lines. This is juxtaposed by visual novel style scenes in which Queen Meve would address other characters within her retinue. 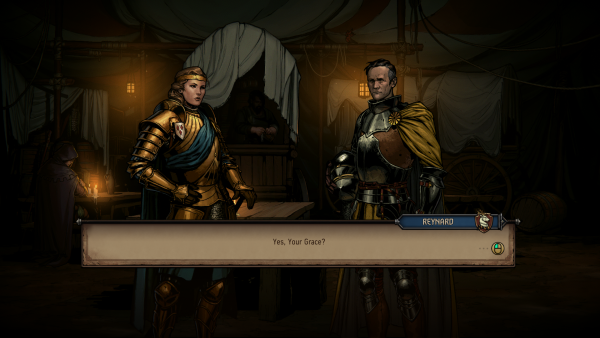 Interspersed within all these are animated cutscenes that are reminiscent of those from The Witcher 3: The Wild Hunt. All these elements tie up to form a gripping story about a Queen betrayed and her quest to retake her kingdom by any means. 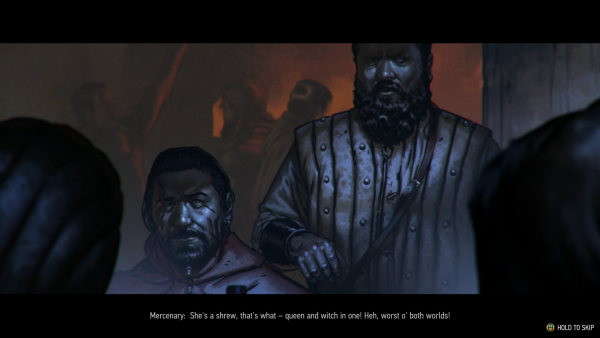 The characters, as we have come to expect from CD Projekt RED, are well written with many layers. The supporting casts are what brings the story to life as they each provide a unique perspective to the going on’s as the game progresses. Queen Meve is, unfortunately, less nuanced. Understandable, considering that we are the one that helps shape what kind of person Meve eventually becomes.

Early on in the game, we must already make tough decisions. Riding into a village in the midst of lynching elves, you have a choice to do nothing or to stop the villagers. I chose to end the lynching and decided to punish the ringleaders by whipping. Instead of being grateful, the elves were disgusted by the leniency of not executing the ringleaders, many of the elves decided to leave the village. These multidimensional choices are what makes Thronebreaker so compelling. 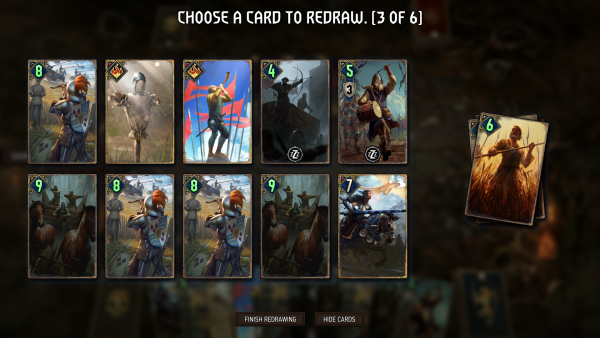 For those of you unfamiliar with the basics of Gwent (The latest iteration that is), the battle takes place over four rows, two rows per player. Victory is achieved by winning a best of three, and you win each round by having a higher point total than your opponent with each card you play giving you a certain amount of points and abilities to manipulate the board. 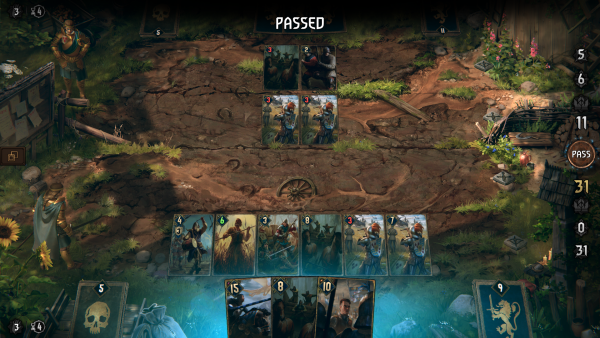 With every encounter is resolved by cards, I was worried that the game would quickly get stale as I would be repeatedly forced to go through repetitive fights using the same deck over and over again. This proved to be unfounded as I was introduced to special battles where the usual rules of Gwent are thrown out the window. 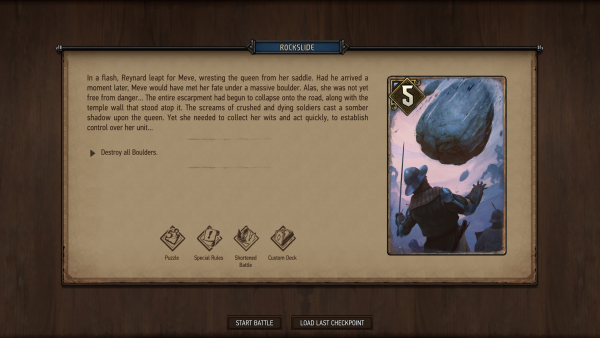 This is what you can come to expect from Thronebreaker with special battles. Every conflict is cleverly translated into a Gwent based card game, and each of these has their own unique winning conditions. Of course, you will still have your fair share of standard best of three battles, but these are not as memorable as the battles with unique victory conditions.

In addition to special story battles and standard battles, Thronebreaker also has puzzle battles. Similar to special battles, the puzzle battles only last a single round, but they are entirely optional and are not necessary to finish the game. 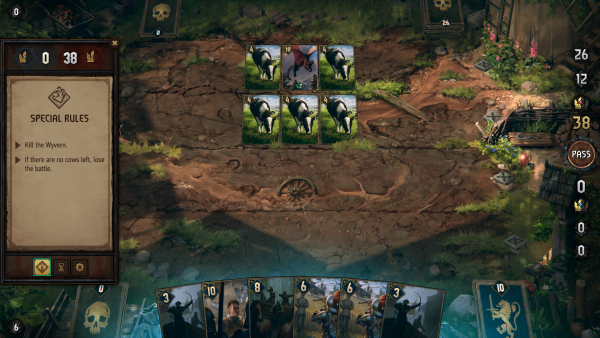 These puzzles are perhaps the most enjoyable part of Thronebreaker apart from its story. Puzzle battles are challenging to say the least but solving them is a reward in and of itself. Given a set of cards, you need to figure out a way to achieve the winning condition using the cards you have. 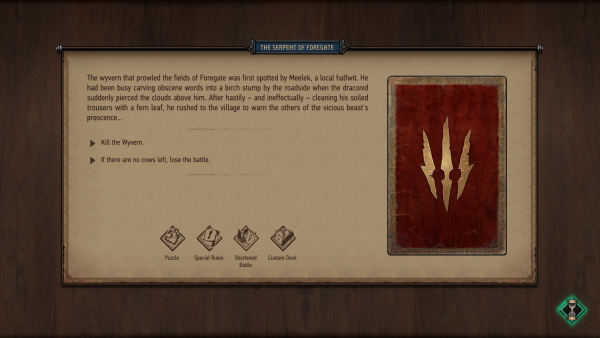 It takes some careful consideration to solve it, and it is unlikely you will solve it on the first try. I also found these puzzles to be a more advanced tutorial of sorts as they would highlight the abilities of individual cards, cards that you will usually already have in your deck. 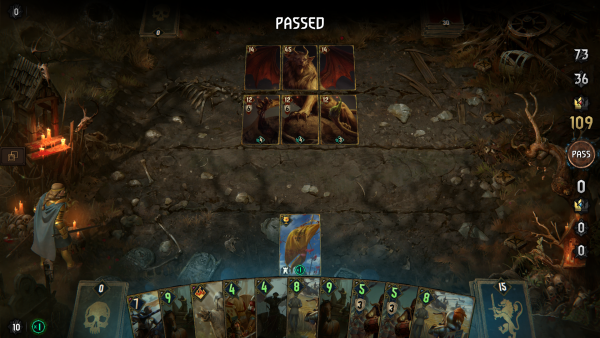 As an RPG, Thronebreaker is still able to deliver as the choices you make have consequences. As the game likes to remind you, sometimes it’s not about choosing the right option but the evil you can live with. Progression is also handled deftly as progression in a card game often comes in the form of power creep. Newer stronger cards replacing older weaker cards. 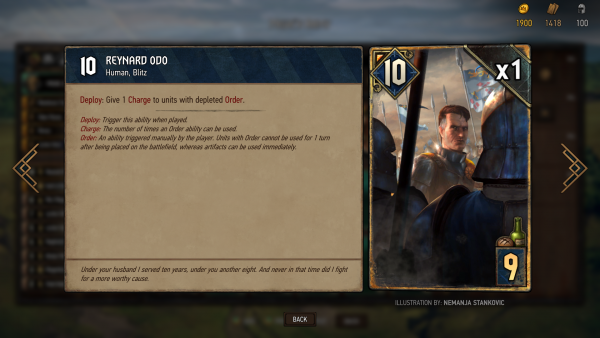 Thronebreaker does a good job getting around this by upgrading the cards itself which give each card new abilities and longevity in a deck. That is not to say that new cards have no place, but they are very much dependent on the deck concept. This is also where the resources I have hoarded went into as I busied myself upgrading my camp which in turn unlocks the upgraded cards and newer cards to be crafted. 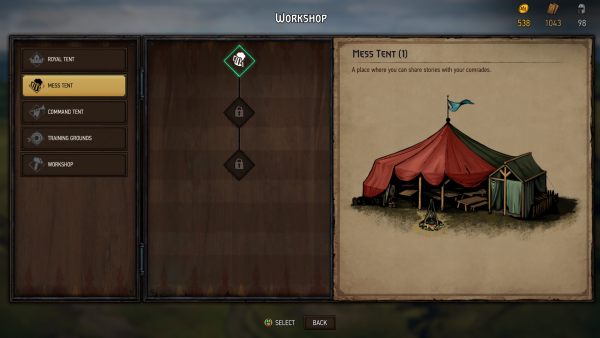 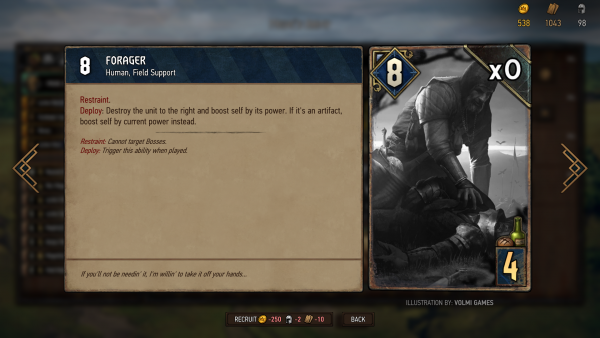 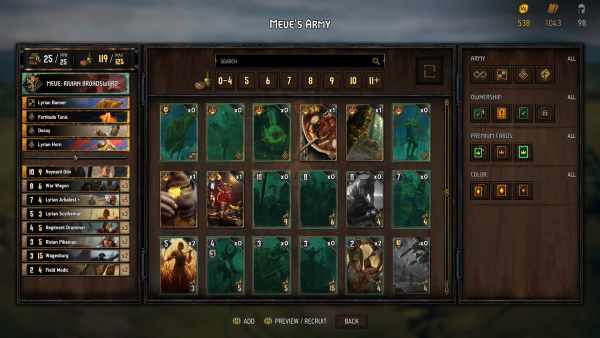 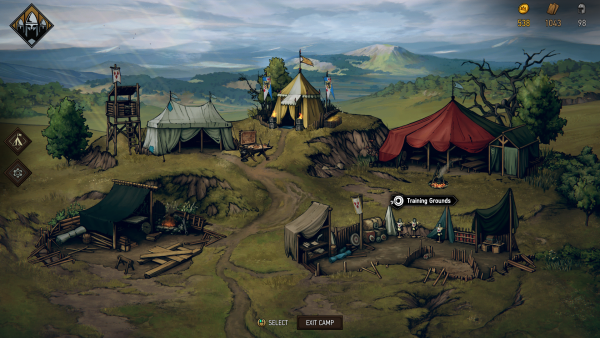 Thronebreaker: The Witcher Tales is a great game. However, there are points in the story where the pacing falters, and the game gets slightly repetitive as you slog through standard battles. Replaybility can also be an issue for its puzzle based gameplay. As a whole, however, it delivers captivating and interesting gameplay filled with interesting characters and familiar faces. 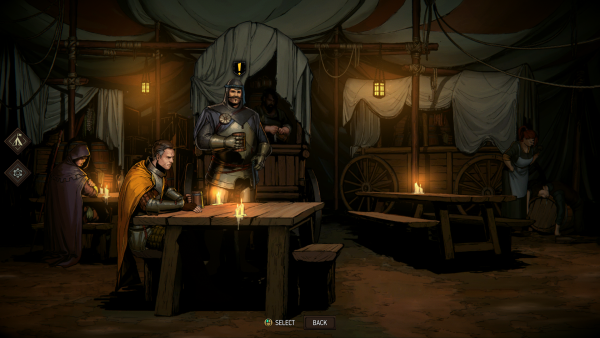 As a huge fan of The Witcher series, I thoroughly enjoyed Thronebreaker. Having read most of The Witcher books as well, the throwbacks and easter eggs within were a delight to discover. If you are fresh to the series, Thronebreaker is not a bad place to start as it is a game strong and light enough to stand on its own. Just think A Song of Ice and Fire (Game of Thrones) but with more monsters.

Thronebreaker: The Witcher Tales is now available digitally on PC, PS4 and Xbox One for USD$29.99. The PC version is only available exclusively on GOG.com.

A bullet fired is better than two in the chamber
Previous post Settling in with Toge Production’s super chill Coffee Talk
Next post ‘Copper’ Dual Shock 4 and 2TB PS4 Pro headed to Japan — will it head our way?