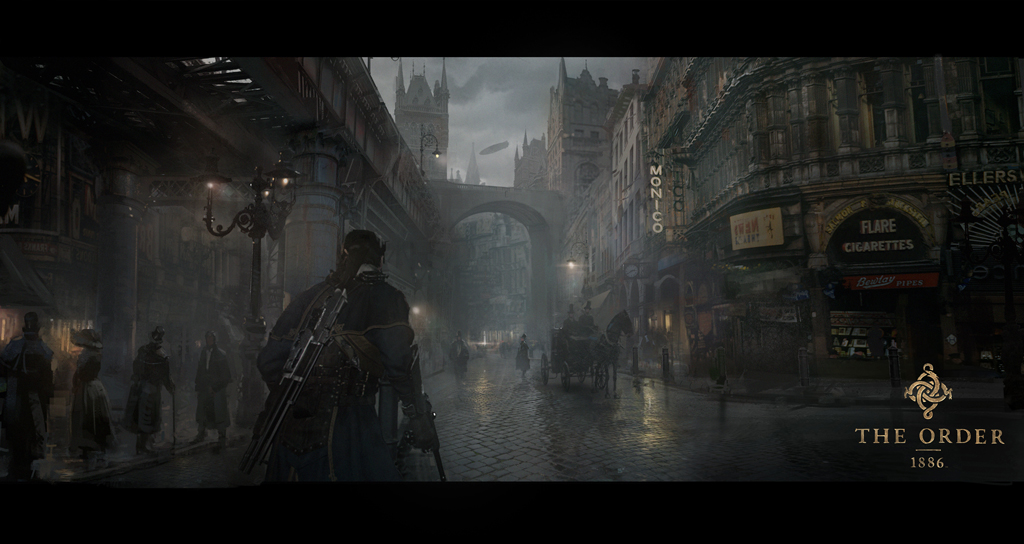 When it was announced at E3 a while back, The Order: 1886 dropped jaws. Sony showed off a game that most people hadn’t even heard of and not only did it look gorgeous, but also from a relatively well known developer. The Order was hyped up as true next-gen gaming and at that moment in time, it probably was. Too bad it isn’t now.

The Order is set in an alternate history Earth where humanity evolved into two different paths; normal humans and half-breeds (werewolves). Both sides war with each other constantly, leading King Arthur to establishing the Knights of the Round Table, also known as the Order of Knights, which safeguard humanity against half-breeds throughout the centuries, and with the aid of a mysterious substance called Blackwater. You take the role of Sir Galahad (although not the same mythical knight of legends) and as the game progresses find out that not everything is as it seems.

There’s quite a bit of backstory to the game but the thing is, most of it is left hanging in the air. Threads are created but never followed, such as the Jack the Ripper killings, Blackwater and other things. In fact, apart from being mentioned once or twice, most of the things you learn about the world of The Order is left unexplored and unexplained, which is another reason to blame on the game’s incredibly short length. I personally clocked in under five hours total, from initial start to completion, playing through the game on Hard. That playtime is inclusive of me dying a few times as well as watching all the cutscenes.

The thing with The Order is that it relies too much on telling a story that it forgets about it being a game. The Order has simply too much backstory to it and you start right in the middle of it all. It’s like watching a movie from the middle onwards. You have no idea about the beginning and thus have no inkling about what’s going on. Instead of trying to explain it to you, the game chooses to ignore it. Too many questions are asked, with too little answers given. One wonders if playing as a new Knight (instead of a veteran one like Galahad) might have been a better choice, as it would have allowed more natural exposition of the setting and background instead of completely ignoring it.

Cutscenes dominate the game and they trigger so often that you’ll swear you spend more time watching cutscenes than actually playing the game. To make matters worse, all of them can’t be skipped. It doesn’t matter if you’re watching them for the first time or the thousandth, you have to sit there and watch. On my second run though the game, I spent more time reading a book as the game droned on rather. The story simply isn’t deep or fleshed out enough to have hidden nuances that reveal themselves on subsequent replays. What you see is what you get and the lack of depth not only applies to the story, it also applies to every other aspects of the game.

As a cover-based shooter, you’d have thought that The Order would at least get that part right. Yes and no. It does control rather well and gunplay feels good but it’s also safe and generic. There’s nothing new or even exciting about it.  Environmental interaction is relegated to set pieces, with barely any cover degradation at all. There are also no weapon upgrades or RPG elements to make combat anything other than a necessity. You shoot enemies because they’re shooting at you but there’s nothing else to make it worthwhile. Blackwater is cool but its usage is too basic and restricted.

Galahad has a couple of different weapons at his disposal in the game but most of them are generic guns too. You have a machine gun, some rifles and some handguns. There are a few notable standouts, such as the Thermite Rifle and the portable Tesla Coil in the form of a rifle (let’s just call it a Tesla rifle). The Thermite Rifle fires a cloud of magnesium at where you aim it, which you then follow up with a flare to ignite. It’s a great gun to look at in action but you rarely get to enjoy the weapon’s maximum effect.

Enemy variety is lacking too. Despite the all the hype of The Order going up against the half-breeds, you only legitimately fight them a handful of times, with two of them being boss battles. Even the normal half-breed fights are lackluster since they only have one attack pattern that they’ll repeat over and over. QTEs abound in The Order and none of them are particularly fun or innovative. Most of them mainly involved pressing a button at the right moment, with failure usually meaning death and a restart of the sequence. God help you if you have a lengthy cutscene after the checkpoint, because you’ll need to keep re-watching it every time you mess up.

Whatever strikes The Order has going against it, graphical quality isn’t one of them. To say that the game looks incredible is an understatement. It’s not hyperbole to say that The Order is pretty much the prettiest game on consoles at the moment. There’s nothing that even comes close to the visual quality of the game. Character models are highly detailed with life-like facial animation and move with a fluid grace. The game also maintains a rock solid 30 FPS throughout and the cinematic borders actually don’t detract from the game, unlike in The Evil Within for instance. The film grain can be a bit annoying but you’ll forget it even exists once the game heats up. It’s just a shame that looks aren’t everything.

The Order is obviously Sony’s attempt to start a brand new IP on the PS4. You can see it from the heavy marketing campaign, the in-depth backstories and world history. Oh and the fact that the game’s ending basically screams for a sequel. The thing is, with a first game being such a sub-par title, would it sell well enough to rate a sequel? Even more importantly, would gamers be willing to give the second one a fair chance given the problems the first one has?

The Order: 1886 is a third-person shooter available exclusively on the PlayStation 4. Developed by Ready at Dawn  and SCE Santa Monica Studio and published by Sony Computer Entertainment.

Aaron Yip is an industry veteran with more than 15 years of experience. When not spending time on his gaming PC and consoles, he can be found in Hyrule solving ungodly puzzles and collecting gems.
Previous post Beta Premiere for Mobile ARPG 'Heart Castle' Begins
Next post Helldivers (PS4) Review