Review: Team Sonic Racing is fast, jolly fun but doesn’t bring much new to the table 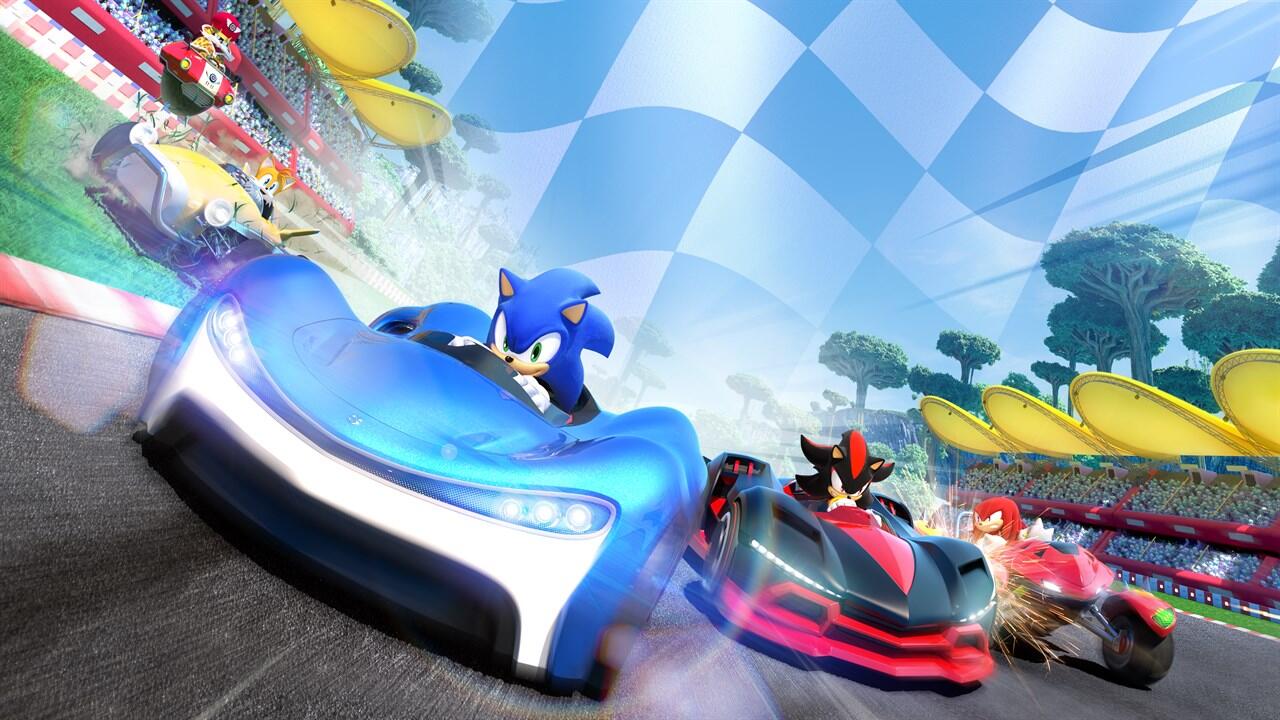 Team Sonic Racing has a lot to prove. From reveal to release, general reception of the game has been… lukewarm at best. When one thinks of the most exciting kart racing game due this summer, they’d probably think of Crash Team Racing before Sonic due to sheer nostalgia alone. Sonic needed a gimmick, something to help it stand out, and that’s our lead in to the best aspect of this game: that ‘team racing’ bit.

This kart racer is incredibly team oriented. Most matches have players in groups of three, racing against other teams. Even if you win first place, there’s no guarantee you’ll actually win the match unless your teammates were close behind and accumulated enough points to beat out every other team. This means that cooperation is the name of the game, and it works in a couple of ways here. 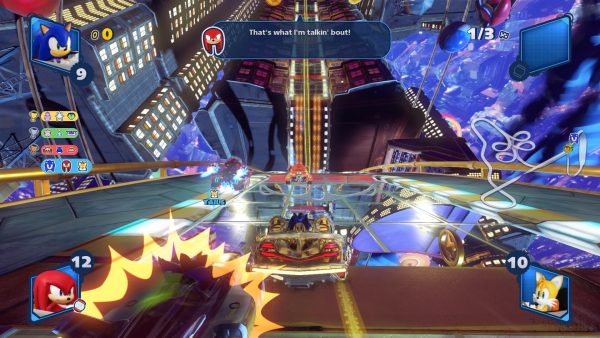 Unlike every other kart racing game I’ve played, you can actually gift items to your teammates here. It’s a very welcome feature, especially when you consider how many times you’ve hit an item box, gotten something useless and used it just so you can get something else. Here, no items are wasted as you can simply gift them to other teammates.

That’s just one of the many team-based actions you can take in this game. For example, following the yellow road a teammate leaves in their wake might not lead you to the Wizard of Oz, but it will slingshot you across the track at incredible speed.

All these new abilities help fill out a Team Ultimate meter. The ability is the same for every team and its honestly a bit generic and unnecessary. It just gifts every member a double-whammy of superspeed and invulnerability, making them essentially unbeatable for a couple seconds. If this is all sounding a bit much, then no worries. There’s a multiplayer game mode where you can play solo to your heart’s content.

You have to work as a team so you get enough points at the end of a match to win.

When you talk about racing games, you have to touch on their tracks. I was actually really impressed by what I saw in Team Sonic Racing. The tracks are all dazzlingly colourful and detailed, but in one way or another resemble tracks from many other games before it. I didn’t see many that really popped out or were unique to this game in particular, besides Roulette Road and Pinball Highway, which were both based on tracks in previous Sonic racing games. Nevertheless, they were still a lot of fun to play through.

I have to touch on the music here as well, which is something I really didn’t expect to be doing in this review. It’s absolutely fantastic! In the spirit of Sonic it’s lively and energetic. Every time I hit Roulette Road and Boo’s House, I just had to turn up the volume and bask in the glory of this soundtrack. It’s too good; in fact, it has no right to be this good, but it is anyway. 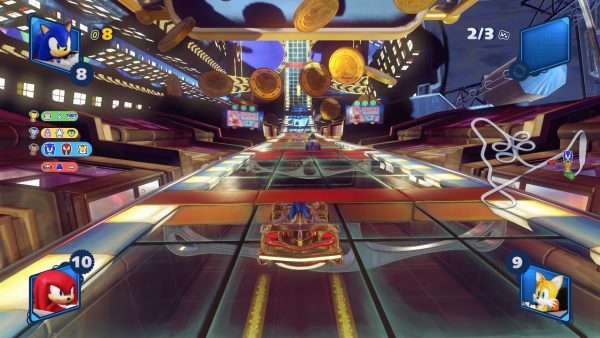 Roulette Road is a fantastic track with fantastic music.

The campaign, however, is not so good. Team Sonic Racing comes with, essentially, three different ways to play: story mode, local multiplayer and online multiplayer. I beat the story mode a while ago, and… there’s no tiptoeing around it. It’s awful. The story consists of six chapters, each chapter being a collection of races. In between those races, you get a visual novel-style collection of cutscenes, as Sonic and pals are roped into racing for a mysterious figure known as Dodon Pa.

It’s really not a good time. The game begins with everyone suspecting Dodon Pa of having nefarious intentions, but still racing for him anyway because… reasons? The voice acting in every cutscene ranges from forced and hammy to downright awful, with Big the Cat being a contender for one of the worst characters I’ve ever had to listen to in a videogame. His lines are excruciatingly drawn out and poorly written, and that goes for the entire story too. 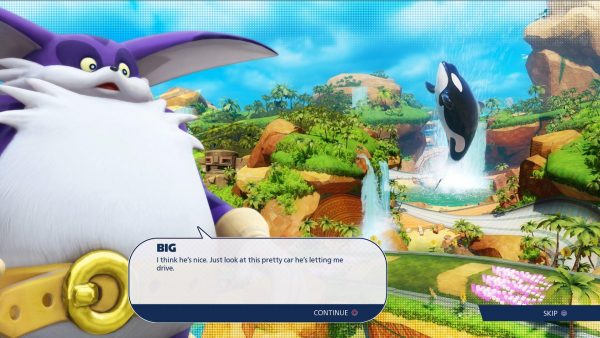 Shut up, Big! Why are you even a thing?

The story mode overstays its welcome about four chapters in, but putters on for another two.  If you get this game for any reason, I sincerely hope you don’t get it for its story because it’s really only good for solo practice. It’s not even a good tutorial mode, lacking explanations for so many of the game’s features that you’ll just have to pick them up on your own.

Moving on, Team Sonic Racing has a pretty neat customisation system. This is tied in with the fact that there are three different types of racers: speed, technique and power types. Speed characters are obviously the fastest in the game, with a special temporary shield that activates whenever they exit a drift. Technique characters can ride over any surface without slowing down, and power characters can plow through obstructions without losing speed. 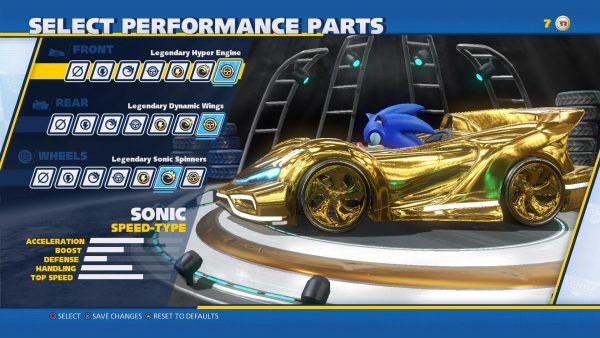 Don’t mind me, just speeding by with my shiny golden car.

Each racer type comes with its own strengths and weaknesses. For example, Sonic is a speed type. He has incredibly high speed but low defense, meaning that he stays spun out longer when he hits something. Fortunately, you can alleviate this with the game’s mod system. Each race won in the story mode gives you points, and you can use those points to get mod pods. These are basically lootboxes, though thankfully you can’t pay real money for them.

Mods that you get can be applied to various racers, adjusting their stats however you like. The downside, of course, is that you might never get the part you want because the mod pods are randomised. That shouldn’t matter because the game is pretty generous with them. Unfortunately, getting one mod per mod pod means you’ll have to open hundreds of them to unlock everything, which can get pretty annoying when you’re opening them all at once. It’d be nice to just get a ‘hold x to open all mod pods’ feature, but I guess the technology just isn’t there yet. 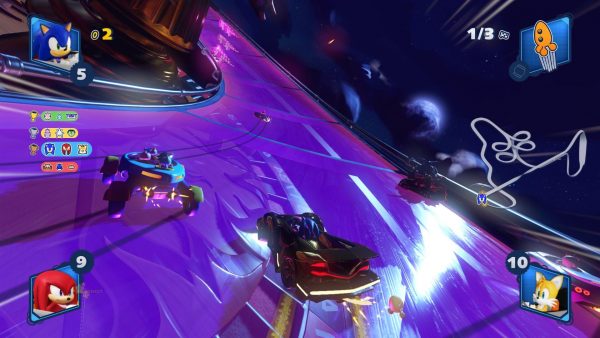 Despite all this, I have to say that the fun factor of Team Sonic Racing really blindsided me. The arcade-y racing gameplay, combined with the bright, colourful tracks and an enticing soundtrack kept me coming back for more. In local co-op, anyway. Good luck finding a multiplayer game, because the player population seems to be pretty barren at this point.

The racing part of this game is still fun, and one could argue that’s all this game has to do right. Unfortunately, there are a lot of other racing games on the market that do racing right, and then some. Team Sonic Racing just doesn’t have much more on its bones to stick out from the crowd.

Team Sonic Racing is out now for PC, PlayStation 4, Xbox One and Nintendo Switch.
Developed by Sumo Digital. Published by SEGA.

Tim loves all sorts of things. Movies, TV shows, video games, comic books, cats and all that good stuff. What doesn't he love, you might ask? Minestrone soup. It is truly awful.
Previous post Twitch Prime pulls out the stops for Amazon Prime Day 2019
Next post GAX Gabs: The Great E3 2019 Roundtable