Home / Breaking News / Review — Sword Art Online: Fatal Bullet is the best in the series, but it still has a long way to go

Review — Sword Art Online: Fatal Bullet is the best in the series, but it still has a long way to go 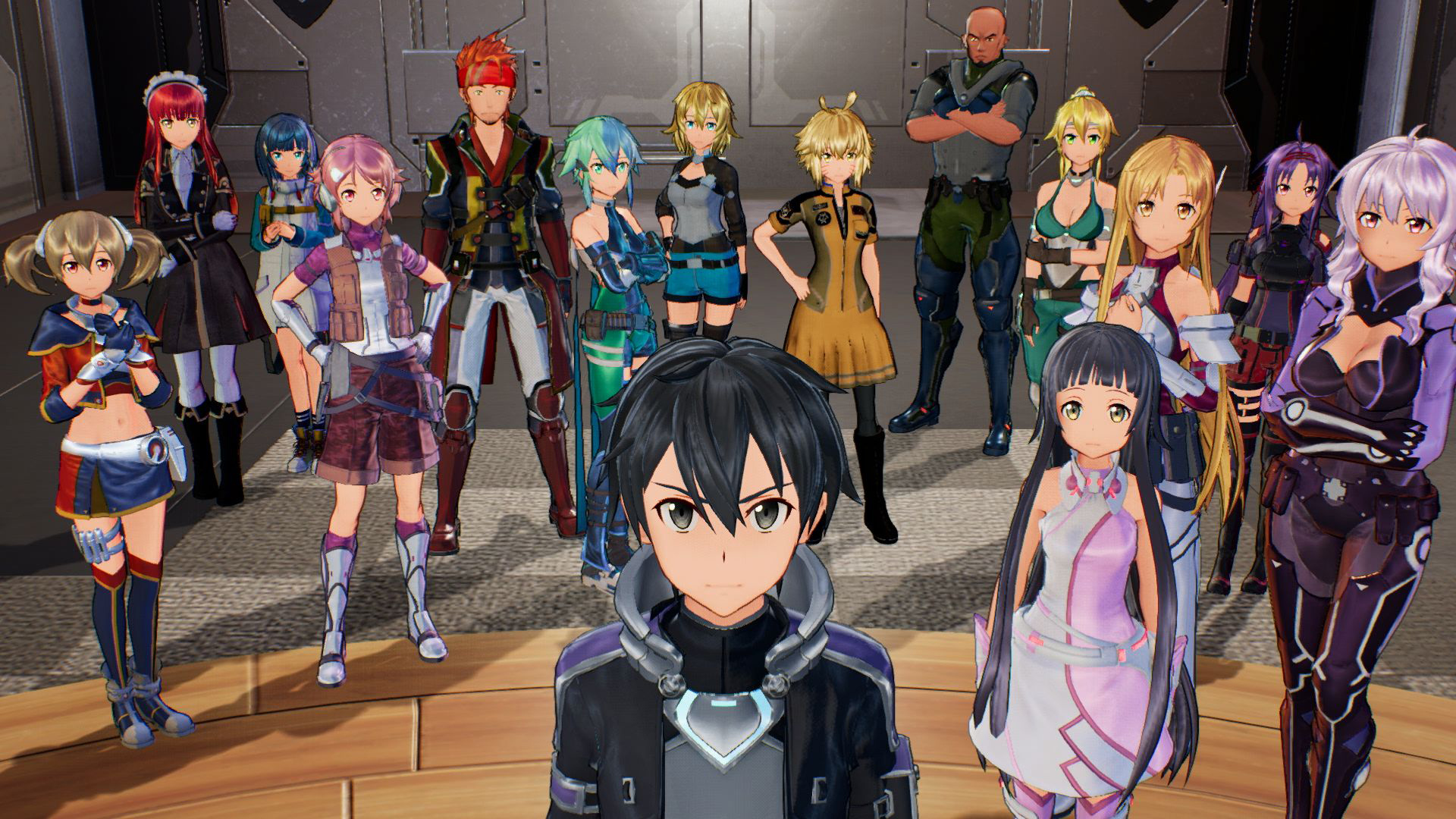 You have to hand it to Namco Bandai. They’re relentless in churning out Sword Art Online games, whether we want them or not. It doesn’t matter if the games have been middling thus far, they still keep coming every few months. That may be great for some fans of the series, but what about the guys and gals who just want something good to play? Sword Art Online: Fatal Bullet is a massive step in the right direction, though it still falls short of being great.

Fatal Bullet takes place in “Gun Gale Online”, one of the many, many VRMMO (Virtual Reality Massively Multiplayer Online) worlds found in the source material. Whereas “Sword Art Online” and “Alfheim Online” are fantasy based, Gun Gale is all about modern firearms. But setting isn’t the only thing that’s different. Unlike the previous games, Fatal Bullet says it wouldn’t have Kirito as a protagonist. Depending on how much you enjoy the anime and manga, this is either an awesome development or the crappiest decision ever. I like it; you now get to create your own customizable avatar. While the clothing options are a little lacking at the start, you get to unlock more as the game progresses. However, one thing that irks me about the character creator is that the faces all look feminine.

Try as I might, I could not get my avatar to look like a dude. I’m not joking — this is the first time I’ve encountered this bizarre problem. It’s not that the game can’t do masculine faces (look at the other characters), it’s just that the preset faces available to the player don’t have any.

It was honestly pretty annoying but, the more I played, the more that got overshadowed by how bored I was getting. The first few hours of Sword Art Online: Fatal Bullet are pretty much tutorial after tutorial. Given how the game’s systems are somewhat (if needlessly) complicated, I can see why they even have that many.

The third-person shooter mechanics are somewhat decent. The guns all feel different and are fun to use. You have pistols, SMGs, miniguns, assault rifles, sniper rifles, rocket launchers, and I’m sure I’m missing a few other types. They all boil down to a matter of preference, though I found that the minigun and AR combo works wonders for me. You also have photon swords to melee with, but they’re pretty much a death sentence due to the enemies’ unerring accuracy at close range. That’s where my minigun comes in.

Instead of ammo calibers, weapon efficiency all depends on your stats. You’ll get to manually assign new points with every level up, and later on there’s a feature that lets you reassign them. This means that experimenting with the guns and stat distribution is pretty much a must if you want to find a play style that fits you.

If you’re bad at shooting, the game also has an alternate mode that auto-aims for you. It’s pretty clever, as the auto-aim accuracy depends on the gun and your stats. I personally find this mode useful when you’re knee-deep in enemies and need to focus on evasion rather than offense. This way, you can dodge and still hit the enemies you’re looking at. It’s not a crutch that plays the game for you, as you’ll still need some skill to survive. All it does is to make the game less punishing for the less dexterous.

On top of that are the different equipped skills that helps to shape play styles. These range from boosting your gun’s attack power to lowering the enemy’s ability to spot you. They do add depth to the overall system, though I didn’t find all of them to be all that useful.

Even guns have their own set of skills, since not all are created equal. While the stats may be the same, a Sangfroid sniper rifle might have a different memory chips built in. As you can imagine, these chips are special modifiers that do all sorts of things, like adding damage or increasing sale value.

While it’s great that Sword Art Online: Fatal Bullet has all these systems in place, their presentation could have been done much, much better. The in-game tutorials are ironically confusing, leaving it up to the player to figure out how things work. That could put off the more casual fans who simply want to blast stuff in a SAO game.

Plus, with all the focus on shooting, the secondary systems stand to be improved too. For instance, there’s no sticky cover for potshots ala Gears of War. In fact, there’s no cover system in place at all. The best thing at your disposal is to simply stand behind full cover, completely blocking lines of sight. There’s no peeking, no bounding from cover to cover, or any of the features you’ve come to expect from the last decade or so of third-person shooters. The shooting does get monotonous due to this, so more variety and gameplay mechanics would’ve definitely helped.

Also, as a faux MMO, Fatal Bullet certainly doesn’t know how to excite players with drops. I’d be much more pumped for that Legendary or Epic weapon if there was some fanfare over it. Simply decrypting it via the menu just feels lame. The original Phantasy Star Online did this incredibly well by using color-coding, so if you saw a red box drop after killing an enemy, you know you found something special. I wish that was replicated here.

One of the big drawing points of Sword Art Online: Fatal Bullet is that the game’s supposedly all about you. And that is true, at least for the first ten minutes or so. At that point Kirito enters the picture and you’re pretty much relegated to being second string. The plot is so tied up with the main SAO cast that it might as well be called “Kirito and Friends Plus You: Fatal Bullet.”

They say you’re the main character but, after a while, I wondered if simply making Kirito the star as usual (and eliminating the player avatar) would’ve made the game better. It also doesn’t help that the story isn’t all that engaging. The ArFA-Sys AI at the center of the story certainly could’ve been more interesting if it didn’t fall squarely into the clueless, klutzy girl stereotype. At least the features it unlocks as you play on helps to make up for it.

Representing the main hub is the SBC Glocken, a huge ship to run around in. However, you’ll quickly find that’s more of a downside than anything since there’s not much to do in the hub. In fact, it’s much more convenient to just teleport around instead of taking the time to run around the place. It’ll help keep your sanity, too.

The SBC Glocken also serves as a gathering hub, where you can accept missions or head for a casual romp through the game’s maps. These are moderately sized but, compared to actual MMOs like Final Fantasy XIV, feel paltry and lack any outstanding quality. Dungeons are peppered throughout but they’re locked behind missions before you can enter. The locations also share something else in common: they’re bland and look basic. It seems that the developers have sacrificed visual pizzaz for a buttery smooth frame rate, though this does mean that environments are mostly empty except for enemies. There’s not much environmental interaction to speak of, too. Luckily, the character models do look pretty good; I just wish there was more enemy variety to go along with that too.

We do get variety when it comes to the different quests types, though they’re not that notable. Most of them are variations of the core RPG quest types, such as eliminating a target, killing a set number of enemies, or finding an item, with very little window dressing to keep them interesting. They’re mostly there to pad out the game’s length, and to give you a chance to grind in-between story missions since the difficulty seem inconsistent. On the bright side, that need to grind is the only negative. Tied to the story, these main missions are more substantial and fun to play, with some seriously tough bosses.

Luckily, movement in the game is pretty fluid. You can run, jump, dive, and dodge like any action game, while also carrying a traversing device called the UFG (Ultimate Fibre Gun). It shoots out a retractable energy beam that can be used to climb walls, move around f aster, or even pull down those pesky flying enemies. It works as advertised but it doesn’t feel as fluid to use, with not much functionality added beyond hat.

Of course, there are also online multiplayer missions. These support up to four people, where you can either co-op through the game’s missions or fight in PVP using a preset SAO character or your own creation. However, I’ve always had a hard time finding any players for the PVP matches for some reason. Online coop is more populated but finding a full room can be hard at times. In short, if you’re picking up the game for multiplayer, you probably want to get your own friends involved rather than hoping to find random pick-up groups. It’s clear that Sword Art Online: Fatal Bullet is the best game adaptation currently available. It’s the most user-friendly, has the best gameplay systems, and doesn’t rely too much on established lore at the expense of newcomers. Yet Fatal Bullet still has a long way to go, especially in terms of its core shooter mechanics. The inability to get behind cover is unforgivable for a modern title, while the RPG mechanics are so densely and indelicately integrated that it may be off-putting. It’s a whole bag of small issues that chip away at what could have been a pretty great third-person shooter in general.

Perhaps Namco Bandai will give the premise a second pass and fix the issues, but as it stands, Sword Art Online: Fatal Bullet is only a tease of what could have been.

Sword Art Online: Fatal Bullet is out now for PC, PS4 (reviewed), and Xbox One.
Developed by Dimps. Published by Bandai Namco Entertainment.
A copy was provided for review. Sal's just your average hardcore gamer. He started gaming on the NES in the 80s and has been ever playing since. Sal doesn't care about which platforms games are on, only that he wants to play them all!
Previous post Review: Dynasty Warriors 9 isn’t what fans were hoping for
Next post Tekken World Tour 2018 announced with five stops in SEA