Review: Super Smash Bros Ultimate is the best incarnation of the series 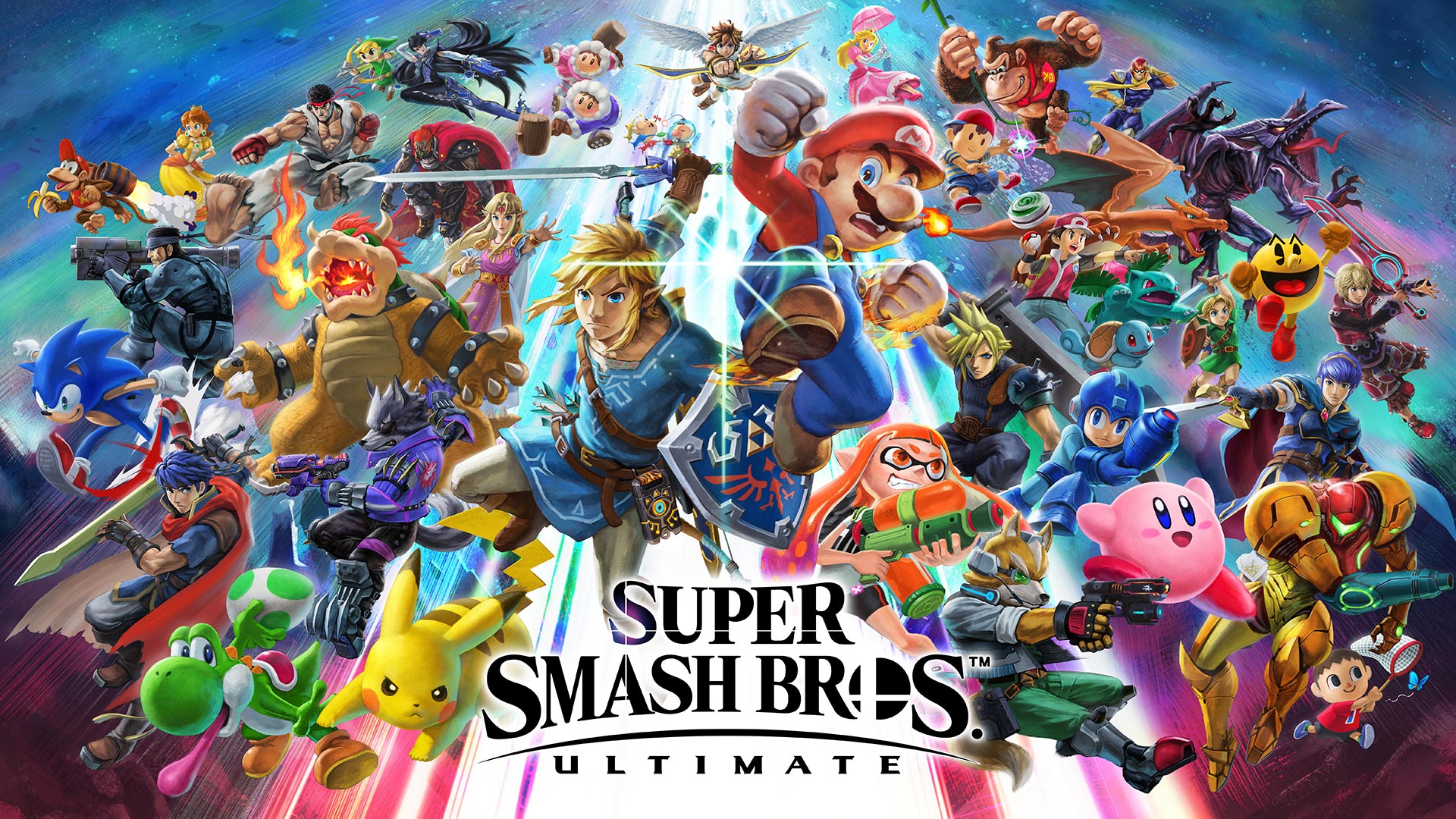 I remember when X-Men meeting Street Fighter was pretty much the pinnacle of crossovers. Two different and wildly popular series in ONE game?! That’s the stuff of wet nerd dreams! It’s honestly great that collaborations are the norm now, but Super Smash Bros Ultimate has just cranked things up to 11.

The game truly lives up to its “Ultimate” title. It includes every single fighter from past Super Smash Bros games, alongside all-new fighters to make up a massive roster of 74. That’s an INSANE number, blowing past Marvel vs Capcom 2’s already impressive 56.  And Nintendo did it by doing what sounds like the impossible: by roping in plenty of other companies to toss their characters into the ring.

The king of crossovers

Metal Gear Solid, Castlevania, Final Fantasy, Sonic… these are just a sampling of the many different franchises present in the game. It’s an incredible feat, and the sheer number of playable characters means that you’ll definitely find somebody who fits your play style. Rather than feel intimidating, it’s fun trying to discover who that one character actually is. 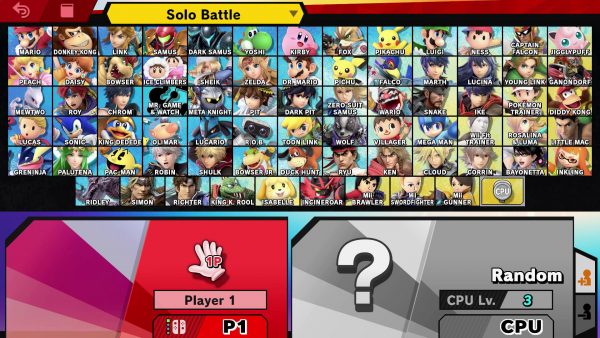 I love the fact that Super Smash Bros Ultimate keeps most of its roster locked up; you only get eight at the start and unlock the rest at random. After playing a couple of matches, you’ll get the famous “a new challenger is approaching” notice before taking on that challenger in a one-on-one match. Win and that character is added to the roster; lose and you’ll have to wait until you can challenge them again.

It’s a great mechanic that harkens to old-school fighters like Tekken 2 and Marvel vs Capcom 2, constantly giving the player something to unlock so the game has a longevity that’s unmatched by most modern fighters. It might be a pain not having your favorite available right off the bat, but it’s a small price to pay.

There are a bevy of modes to explore, with support for custom matches too. New to the single-player offerings is the Spirits mode, which has you navigating and fighting in a large overworld to unlock Spirits and fighters. 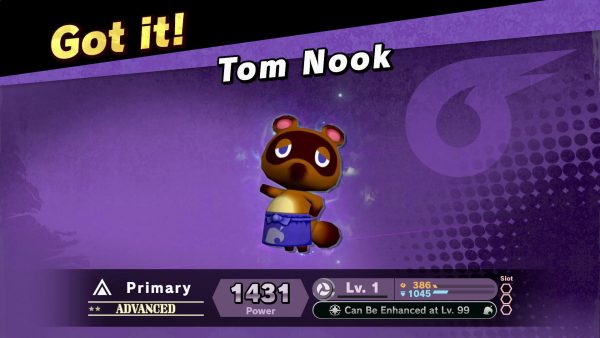 Spirits are non-playable characters from a ton of different franchises. You may equip them, sort of like gear, to boost stats or grant special abilities to your fighter. It depends on whether you have a Primary or a Support spirit, with the first coming in different rarities.

It’s a bit more involved than that but Spirits mode is a fun, if rather basic, diversion from the normal battles. I’d prefer a mode that’s similar to the Adventure stages from Super Smash Bros Melee, because after a while you’ll realize that Spirits is just busywork with little impact on the main game.

The main draw came down to those cameos — I just wanted to see if this character from that series would appear as a spirit. That curiosity was stronger than my desire to unlock more fighters for Spirits mode, which should speak volumes about how boring it gets after a while.

It’s a shame that the overworld map is boring and uninspired too, which makes traversal even more of a chore. The flat 2D visuals looked so out of place among the slick UI that permeates the rest of the game. Luckily, you won’t spend too much time looking at it since. 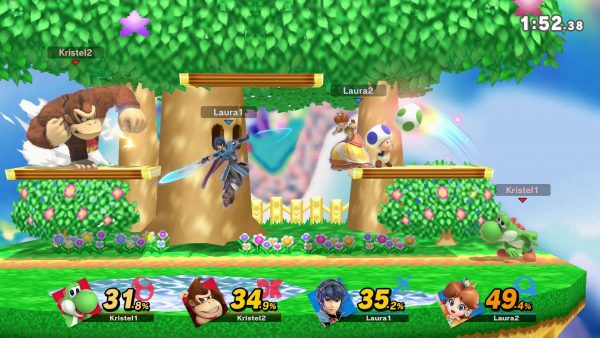 If you’ve never played Smash before, the games support up to eight players in battles. You and your opponents are dropped onto a stage, where you then have to whack each other until somebody falls off. Instead of life bars there only are percentage meters — the higher your received damage, the easier it is for you to be sent flying off the stage and to your doom. The moves are simple to execute, with dodges, blocks and throws available, though some fighters can even counter. It’s a very pick-up-and-play type of game, which makes it perfect for parties and all-ages players.

So it’s a shame that loading times for battles can take a while, especially for Spirits mode. While it’s understandable that normal matches can take a while due to their size, the smaller 1-on-1 Spirits fights can sometimes take nearly as long as regular four-player battles. Restarts are met with similarly lengthy load times, which is even more of a pain considering how challenging some battles can be.

Offline multiplayer is where the game truly shines. You can customize the match rules to your heart’s content and there are a ton of different modes to try. There’s always a chance to play multiplayer too, since the Switch already comes with two JoyCons. You can freely mix and match them with the Classic Controller so everybody can play how they want. Best of all, the frame rate is buttery even with eight players duking it out, which isn’t something to sneeze at considering how chaotic things can get. 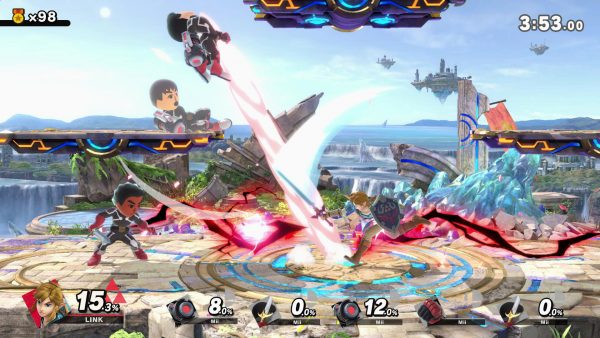 Sadly, online multiplayer (which needs a paid subscription to the Nintendo Network) doesn’t fare as well. It lacks the variety and flexibility of modes in single-player and the matchmaking is joke, treating your preferred match settings as suggestions instead. Want to play a one-on-one match? Tough luck, the matchmaker wants you in a four-player deathmatch instead.

Even if you do get paired correctly, good luck finding a game without lag. I’ve heard reports that some people are finding it relatively lag-free but that’s NEVER the case for me. Input lag is so bad that it makes playing on a 56K modem seem like broadband. Playing with a wired connection seems to be marginally better, but that’s not an option when you’re playing in handheld mode.

That might get better if Nintendo patches their netcode to make things more stable. However, that may just be wishful thinking on my part. For now, online multiplayer is a mess and I heartily recommend avoiding it as much as possible.

The game’s biggest allure weirdly comes not from the fighting itself, but from the huge amount of extra content. I’ve mentioned the unlockable fighters and spirits but there’s also a ton of extra material, and chief among them is the Music Gallery. It has some of the best tracks from the series represented, and while there are curious omissions like Symphony of the Night’s “I am the Wind” or paltry selections like Final Fantasy, you’ll never find a more eclectic Music Gallery in existence. 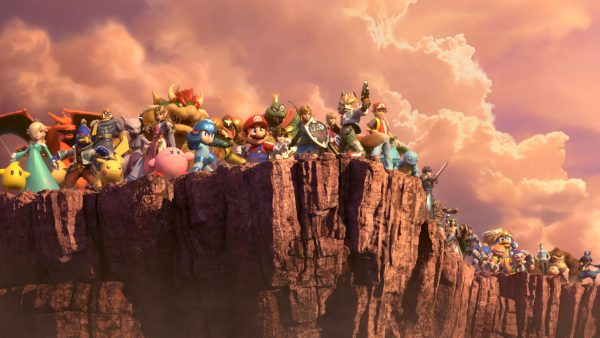 Super Smash Bros Ultimate might very well be the best incarnation of Nintendo’s series, but there’s still a ton of issues that could be improved. While the combat is an acquired taste, it’s undeniable that the game has a massive list of unlockable content to keep players occupied for an obscenely long time. Best enjoyed if you have a group to regularly play offline multiplayer with.

Super Smash Bros Ultimate is out now exclusively for Nintendo Switch.
Developed by Bandai Namco Games and Sora Ltd. Published by Nintendo.
A copy was provided for review.

Sal's just your average hardcore gamer. He started gaming on the NES in the 80s and has been ever playing since. Sal doesn't care about which platforms games are on, only that he wants to play them all!
Previous post Review: Razer Nari Ultimate headphones shakes up the competition — literally
Next post Razer’s new Singapore headquarters opens in 2020