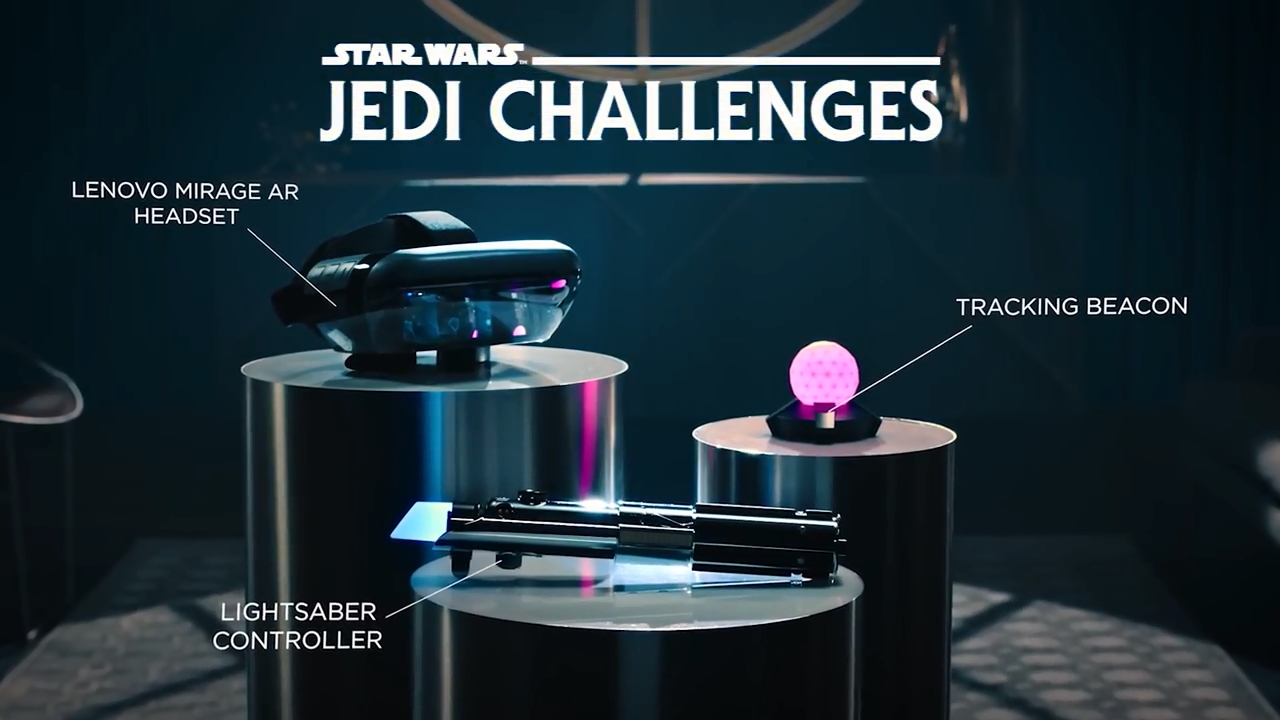 The reception for Star Wars: The Last Jedi has split the galaxy into two, rocking the fandom with passionate essays, sensationalized reactions, and flocks of space puffins i.e. Porgs. In the meantime, those looking to move on for some hands-on have plenty of options at their disposal: new LEGO sets, new content in Battlefront II, or in our case, Lenovo’s Star Wars: Jedi Challenges kit.

For a princely S$379, fans get to take home a Lenovo Mirage AR headset paired with a tracking beacon and a lightsaber controller. Simply download the accompanying app, slot your smartphone into the headset, and you’ll be well on your way to Padawan status (Skywalker mentor not included).

Putting it all together

Unlike virtual reality, setting up an augmented reality kit is incredibly straightforward. The only sensor you need to deal with is the tracking beacon, which takes a pair of AA batteries and goes on the floor. The lightsaber takes a Micro-USB to charge but, once ready, is fuss-free and easily recalibrated at the push of a button. Additionally, the see-through visor means you’ll get to watch your immediate surroundings and, thus, get away with a relatively smaller play area. Lenovo recommends a space of “at least 1.5 meters x 3 meters” with the tracking beacon 1.5 meters away, but it does work with less.

It makes Star Wars: Jedi Challenges an excellent choice for family and guests. The lightsaber controller is a decent conversation starter, lingering somewhere between Hasbro toy and certified replica in terms of build and finish — just be warned it attracts fingerprints faster than scavengers to a droid. From there, it takes no more than five minutes to go from coffee table decoration to interactive play piece.

The only pain point, really, is the headset itself. For one, the design and placement of the hook-and-loop fasteners require a second pair of hands for a proper fit, somehow making it more troublesome than any of the major VR headsets we’ve tried. For those wondering, it does play nice with spectacles.

The second involves the smartphone tray, which slides out from the left-hand side after opening a panel. Slotting the tray in or out isn’t as smooth as I’d expect, oftentimes requiring a little extra force (heh) to wiggle it free. For comparison, swapping out a Nerf Clip feels like its sliding on butter. My concern isn’t so much the fit but the tray’s durability, seeing how it needs to be manhandled with each use. Perhaps it’ll get smoother over time, but that’s an observation reserved for long-time owners.

As for the tray itself, it has adjustment tabs to accommodate various screen sizes. It’s best to check the official list of compatible smartphones, but devices from the iPhone, Samsung Galaxy, and Google Pixel families are readily supported, as well as recent flagships such as the LG G6 and Moto Z2 Force. 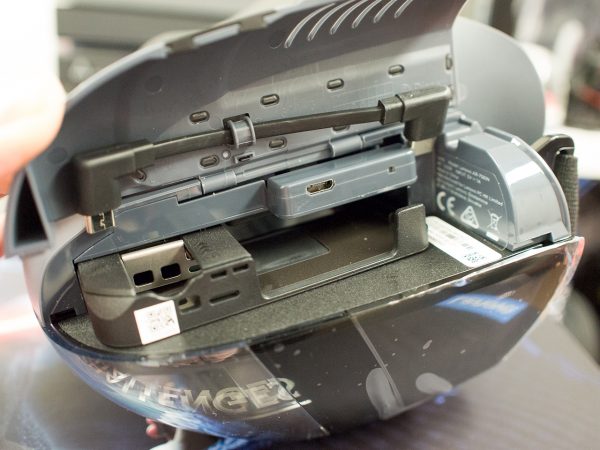 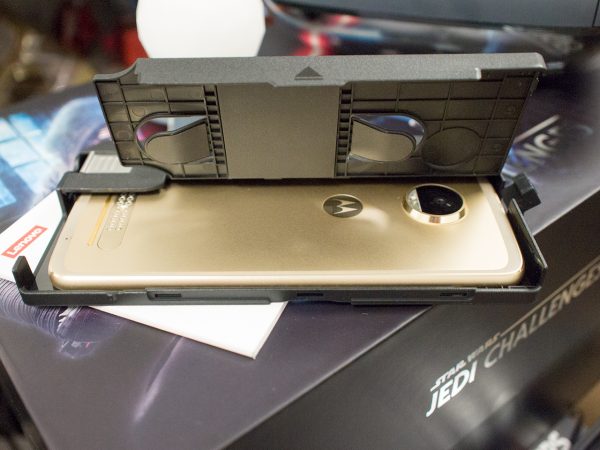 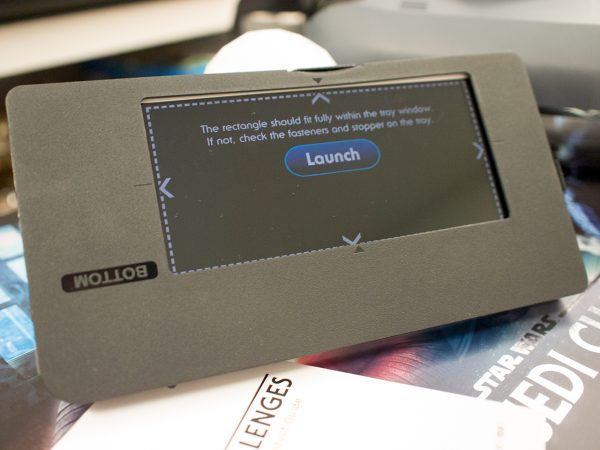 Taking a crack at AR

So, how does it all work?  Through a combination of optical and positional data transmitted over Bluetooth, the headset, controller, and beacon all work in concert to determine your lightsaber’s angle, height, speed, and everything else. Or you could just say it’s the mysteries of the Force.

In-game, this lets you slice apart Trade Federation droids, deflect blaster bolts, and even go toe-to-toe in a lightsaber duel with Sith lords Darth Maul and Darth Vader, just to tease the first two. Now that The Last Jedi has released, the app will soon be updated with an all-new duel: a 1v2 against Snoke’s Praetorian Guards. Oh, they’re adding Porgs too.

Chances are, we’ve all had our share of motion-controlled adventures from the previous generation of gaming consoles, and swinging around the lightsaber here doesn’t feel too different. However, that’s not to say there haven’t been any improvements. Today’s hardware and software makes our slicing and dicing much more accurate, even capable of registering thrusts in a satisfying manner – not skewing to the sides like a hopeless drunk. The response time is very impressive as well, with next to no delay should you swing the saber at a slow, steady, and safe rhythm.

Yet it’s the augmented reality that makes it all feel fresh again. On the one hand, it’s not as immersive as virtual reality since your foes are phasing into existence right from your living room, but seeing the physical world lends a greater sense of depth that VR hasn’t quite captured. It wound up being far more interesting than I had imagined.

If you’re seeking ideas, Lenovo, how about giving us a light gun game starring Han Solo to tie-in with the next movie?

Promising as it is, Star Wars: Jedi Challenges isn’t without its problems. Like many of its AR and VR peers, it isn’t technology but content that’s holding the entire thing back. Exciting as it is to face a marching wave of Super Battle Droids, or to be on the receiving end of Darth Maul’s pacing and snarls, the whole endeavor tends to feel a little stiff and lifeless.

Picture that first lightsaber duel between Obi-Wan Kenobi and Darth Vader in A New Hope. It’s an important narrative moment, understood in lore as a powerful clashing between sides. On-screen, however, it doesn’t make for much visual excitement as, say, Maul’s toying of a younger Kenobi and Qui-Gon Jinn in A Phantom Menace (ignoring everything else about that train-wreck).

Playing Star Wars: Jedi Challenges feels very much like the former. My wanting athleticism and user safety aside, the on-visor action just doesn’t get the old adrenaline going. Block incoming fire, swing at any Stormtroopers in range, rinse and repeat – it grows tiresome sooner rather than later, and the duels don’t offer much variety on repeat playthroughs. Yes, we slowly unlock Force powers but its with very little fanfare and with even less visual significance.

I think part of the problem lies with how the whole thing is structured more like a mobile game with its piecemeal levels and heavy hand-holding, the scripted events not smartly masked but as plain as a QTE. It’s why I wrote “Padawan status” earlier on, because putting Jedi in the title sets expectations for high-risk missions and life-or-death encounters. What we have here is more of a training simulation, the sort that Luke Skywalker would have shown his students before everything wound up in flames.

There are other game modes, such as Holochess and an RTS-like Strategic Combat mode, but they’re not what you’re buying the Jedi Challenges set for — even the packaging emphasizes the lightsaber dueling. These modes play fine, true enough, but it’s nothing I’d go out of my way to set up for.

To round back to the beginning, Star Wars: Jedi Challenges makes for great family and guest entertainment. Kids will have a blast with it, and friends will get to do more than “ooh” and “ahh” over (admittedly beautiful) lightsaber replicas locked behind display cases. Of course, die-hard fans will find it extremely difficult to pass up on this opportunity, as it’s the closest thing to being a virtual Jedi right now.

It’s a fun shared experience, as Star Wars should be, but little beyond that. Longevity is an especially troubling concern when there have been no confirmation of long-term updates for the system, and when the price tag is so uncomfortably close to the robust PlayStation VR, it puts Lenovo’s AR kit in a fairly tight spot.

A unit was provided for review.

Ade thinks there's nothing quite like a good game and a snug headcrab. He grew up with HIDEO KOJIMA's Metal Gear Solid, lives for RPGs, and is waiting for light guns to make their comeback.
Previous post Review – Logitech G603 wireless gaming mouse
Next post Bandai Namco reveals Black Clover: Quartet Knights for PC and PS4