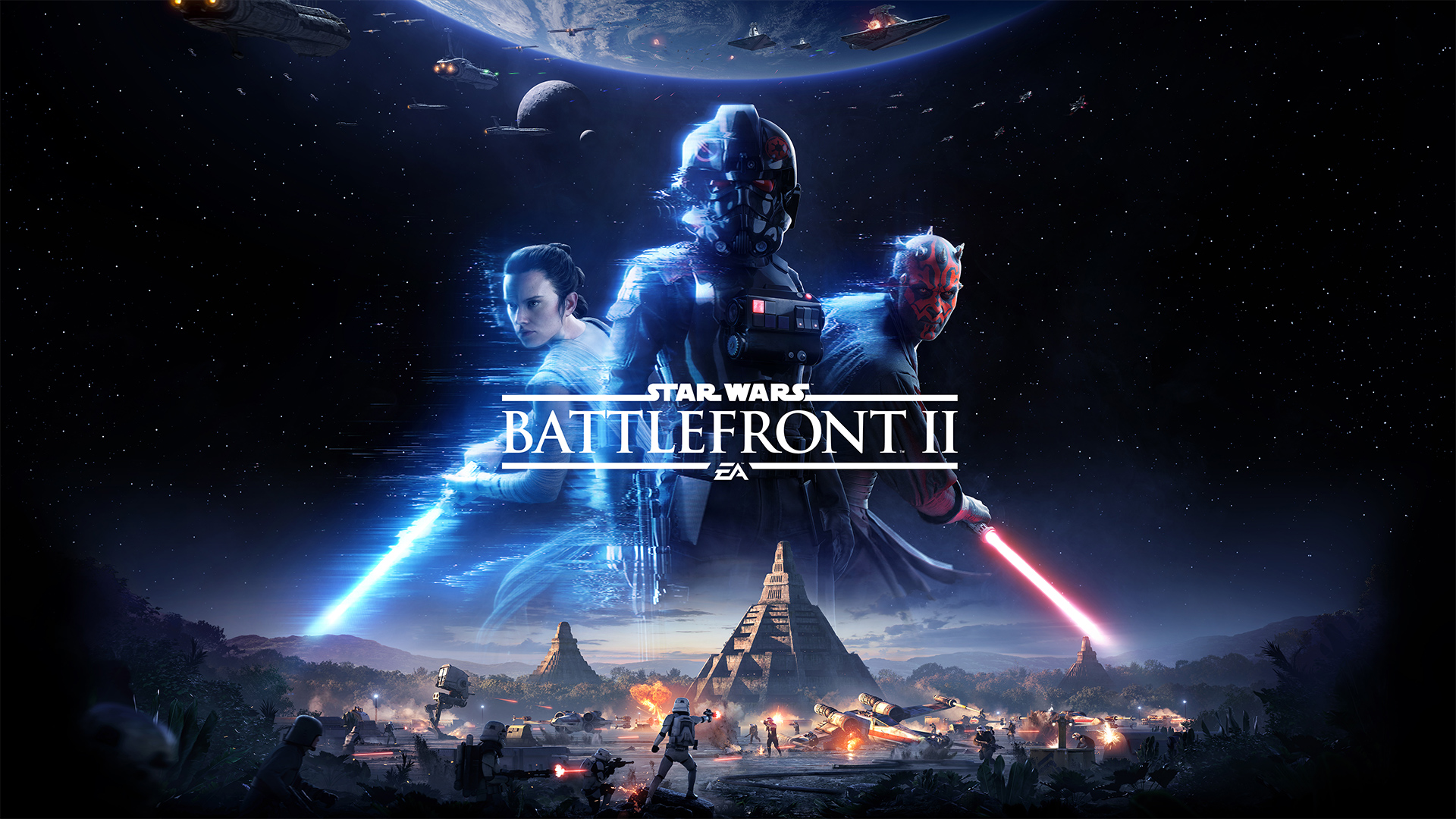 In a galaxy far, far away, even the Galactic Empire bends its knee to the loot box. At least, that’s the sentiment that dominated in the days leading to Star Wars Battlefront II, before publisher EA was forced to temporarily disable microtransactions at the eleventh hour.

Underneath the controversy lies a multi-million dollar Star Wars game that supposedly addresses complaints over its predecessor. A single-player campaign, a dedicated space combat mode –  is this the sequel fans are looking for?

Our single-player tale begins in captivity, handcuffed and under armed guard aboard the rebel star cruiser Invincible Faith. Inferno Squad commander Iden Versio, an Imperial special forces operative, regards her captor with disdain, her only words an unwitting omen: “You’re right. The Empire’s time has come.”

Developed by EA’s Motive Studios and Lucasfilm, the campaign promised to go “under the mask” of the Empire’s troops during the Imperial fall. It’s a perspective rarely explored outside of literature, essentially being the Star Wars’ equivalent of World War II through the eyes of Nazi Germany. Considering how villains tend to be the heroes of their own story, Battlefront II had massive narrative potential. It doesn’t live up to that promise. My primary critique is that it plays like a bored teen flipping past huge swathes of a book, focusing only on the blaster-filled set-pieces that sell trailers. Don’t get me wrong, some of those action sequences do a great job of getting my blood going: Iden scrambling in a TIE Fighter to counter a rebel attack, or Princess Leia’s desperate defense of Naboo, still ring fresh in my memory.

Unfortunately, without giving these characters and events room to breathe, everything feels shallow; it’s problematic when they’re trying to portray an elite Imperial trooper second-guessing her allegiance. I can see the writers trying to squeeze in contemplative moments, such as the few encounters with Iden’s father and commanding officer, Admiral Garrick Versio, however any effect is ultimately lost amid the generous time skips and generic mission structures.

Battlefront II is a shooter, I get that, but when you have the treasure trove that is Star Wars it feels almost criminal not to refine the storytelling or pacing. Did EA forget that Titanfall 2 exists? It’s disappointing they didn’t show us more of the Imperial rank-and-file, either, choosing instead to lean towards fan service and Episode VIII commercial as the campaign wore on. At least side characters Del and Shriv, who makes a great pairing with Lando Calrissian, kept the later parts memorable. ‘Galactic Assault’ returns as the leading mode in EA DICE’s multiplayer, where 40 players engage in combined arms warfare over a series of attack-or-defend objectives. Picture the rebels leading a stolen AT-AT through the forests of Endor, or Clone troopers defending Kamino against Separatist droids. There are eleven of these massive and cinematic battlefields, tapping on all three movie eras.

Although we’re revisiting a few locales from EA’s first Battlefront, the new scenarios and objectives are much more entertaining. The map designs keep the action tight and directed, with just enough breadth to offer multiple angles of attack. Flanking around the edges no longer feels like a slow, unproductive trudge, and these quieter approaches seldom go unchallenged. Survive, and you’ll soon discover the joy in charging enemies with the amazingly satisfying shotgun.

While packing good variety, not all maps are created equal. The Wookie home world Kashyyyk stands out as my least favorite, frequently plagued by stalemates and overtime. Drawn out battles on other maps, such as Death Star II, are usually frantic pushes to steal a narrow victory, but on Kashykkk it’s often a dull countdown to the Republic’s winning cinematic.

One curious revision are squads, which are now automatically assigned and spawned in waves. These are dynamic, grouping the first four people in the respawn queue regardless of whether they’re already in a party. The result feels half-baked: they incentivize players to co-operate through identifying colors and bonus points, yet still fail to provide in-game communication tools. Add the illogical grouping scenarios on top and the whole exercise seems pointless; for example, a squad may pair a fighter ship with three soldiers, for all the good that would do. Thankfully, party members are highlighted in green so you can get some semblance of coordinated play going.

Instead of Galactic Assault, parties are better off in the 8-vs-8 ‘Strike’ mode that is limited to a single objective phase. The reduced player count makes for higher-stakes battles, which are either reskinned takes on ‘capture the flag’ or bomb-planting scenarios. Without the Sith, Jedi, vehicles, or named characters running around, Strike provides an even playing field for infantry, thereby granting nuance to the different classes and player loadouts.

A Jet Trooper’s mobility feels significant rather than flashy when fleeing enemy fire, whereas a Super Battle Droid begins to feel truly dangerous when staring down the entire enemy team of eight in a cramped corridor. Players may also consider utility and party synergy for their ability loadouts instead of raw survivability and damage output. It’s contrary to what a Battlefront title ought to be, but the focused infantry experience pays off handsomely.

What I can’t believe is how the Arcade doesn’t support custom multiplayer games; it’s a horrendous oversight given DICE’s history with the Battlefield series. Even the themed challenges are single-player only (on PC), when they could have been a fun co-op break from the multiplayer. I have him now

For some, however, it’s the new 24-player ‘Starfighter Assault’ that’ll be racking up all those extra hours. Developed by a third studio, EA’s Criterion Games, Starfighter Assault embraces the Burnout creators’ penchant for accessibility, speed, and chaos to create a show-stealing mode for Battlefront II. Its name tells all, sharing plenty in common with Galactic Assault: hero units, multiple-stage objectives, and visually-stunning warzones. One moment you’re fending off bombers, and the next you’re zipping through a station to deliver some proton torpedoes.

Purists may turn their nose at the simplified controls but Criterion have done an impressive job with the keyboard and mouse. I’m still able to perform rolls and sharp turns, deftly navigating in-between treetops and asteroids to ambush enemy pilots or break missile locks. By allowing more players to pilot effectively, the mode stands to last long after launch. I wouldn’t be surprised if people were playing Battlefront II exclusively for Starfighter Assault, as it’s the best-looking Star Wars space combat experience presently available. As if millions of voices cried out in terror

We now come to the heart of the controversy: loot boxes, or “crates” as they’re called in-game. They’re Battlefront II’s primary method of attaining Star Cards, which grant passive boosts and active abilities, and they used to be to be a clear case of pay-to-win before the massive backlash. The crates still remain, however, and they’re an intrinsically terrible way of approaching progression.

The reason is simple: crates take control out of a player’s hands, abandoning thought-out progression curves or builds in favor of blind luck. What’s more, when abilities are tied to an unfavorable game of chance, you either risk upsetting game balance or providing infinitesimal benefits for a token sense of accomplishment. Battlefront II suffers from a mix of the two, though they thankfully aren’t severe enough to render the game unplayable.

You can and should manually craft essential Star Cards, although accumulating the required material – also used in upgrading said cards – takes patience. Buying crates with in-game credits is obviously the faster and time-efficient route, though it’s really nothing more than conditioning in the hopes that money is eventually used. It’s a whole bag of issues that goes beyond the scope of this review, but the ensuing fan outrage has catapulted loot boxes into mainstream media and government offices. When it comes to player pride, let the scoreboards and trophies do the talking; if it’s digital revenue, offer us cosmetics instead.

I still maintain we should do away with the aging concept of progression unlocks entirely. These are not RPGs, and history has shown us that good shooters stand entirely on the merits of their gameplay, not artificial reward systems designed to pat us on the back and drip-feed addiction.

We can’t wrap things up without talking production because “wow” has never been a more apt descriptor for the game. Battlefront II is a graphical triumph: the white rebel ship corridors, the lavish forests of Endor, and the dazzlingly panoramic views of space are marvels you want to share with non-gaming Star Wars fans. In fact, we have the bizarre and upsetting situation where the in-game cutscenes are nowhere as consistent as the actual gameplay, oftentimes reflecting a marked decrease in frame rate and resolution (if on 4K) for both the PC and Xbox One X.

DICE have, expectedly, impressed with the game’s audio design as well. Star Wars has a huge library of sound effects iconic to the franchise, and they’re used to great effect. Blasters and lightsabers are obvious examples, but just as invigorating are the scream of TIE Fighters and the clonk of AT-ATs. Even the different sirens used by the rebellion and Empire help lay the immersive groundwork for the battle ahead.

All said and done, Star Wars Battlefront II is a huge missed opportunity. The single-player campaign missed the mark by offering vignettes over substance, lobbing new faces and events without sufficient time or care. The multiplayer missed its potential by obfuscating the positives with an overreaching loot box system, thus gutting the player-base with boycotts. Yet most tragic of all is how Battlefront II’s achievements have been martyred for a consumer outcry long in the making.

Star Wars Battlefront II is out now for PC, PlayStation 4, and Xbox One.
Developed by DICE, Motive Studios, and Criterion Games. Published by EA.
A copy was provided for review.

Ade thinks there's nothing quite like a good game and a snug headcrab. He grew up with HIDEO KOJIMA's Metal Gear Solid, lives for RPGs, and is waiting for light guns to make their comeback.
Previous post Path of Exile’s new expansion, War for the Atlas, adds new endgame content
Next post Creative Assembly announces new Total War Saga: Thrones of Britannia spin-off