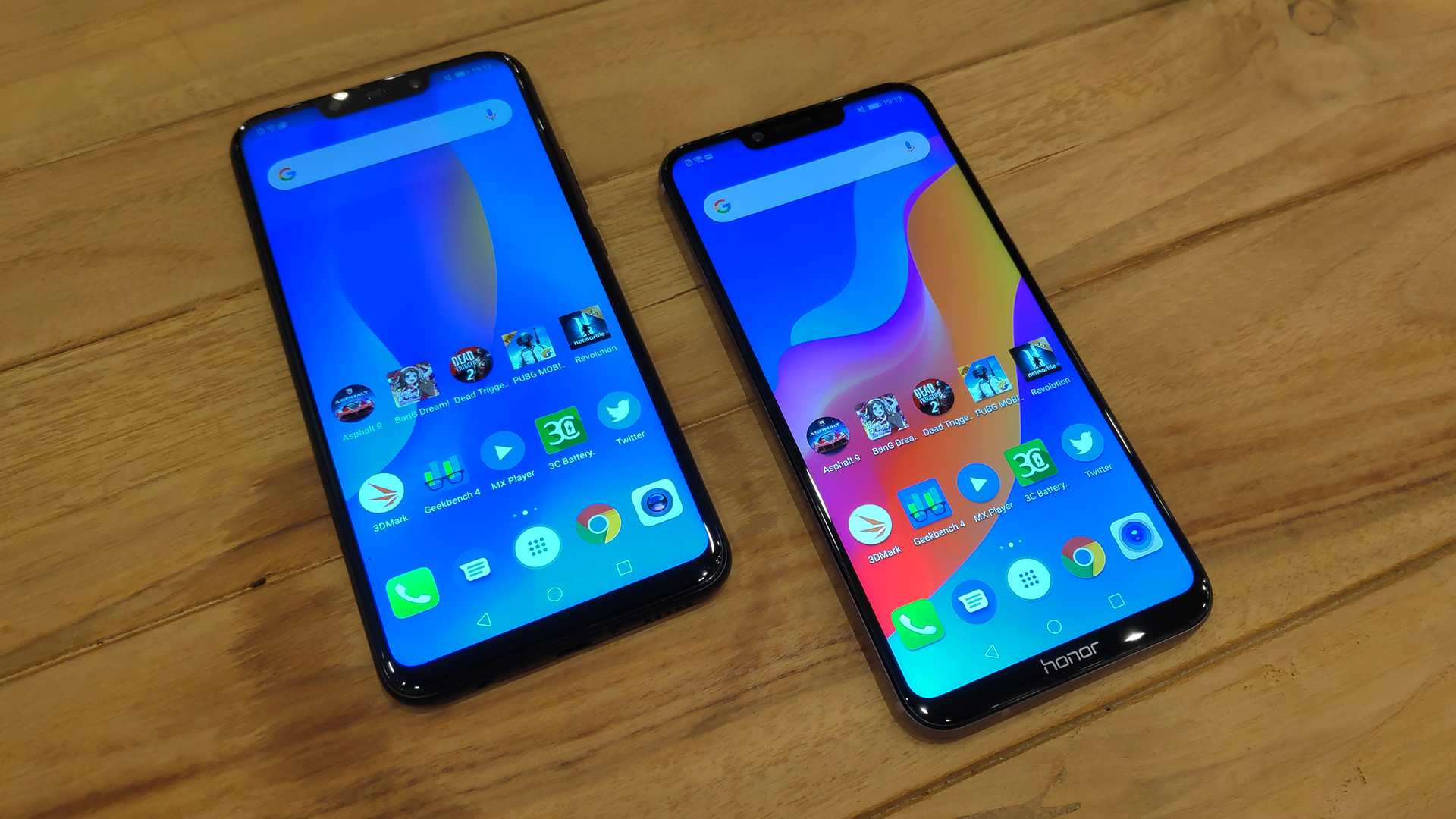 The Razer Phone opened the gates for what has been a long time coming: gaming phones. Everyone has faster processors and smarter AI cameras, but do they have haptic feedback for games? Are their graphics chips turbo boosted to eke out those few extra frames? In a field as homogeneous as smartphones, here was an opportunity for brands to stand apart; and swept up in our nets are a highly curious Chinese duo.

Both the Huawei Nova 3i and Honor Play are mid-range offerings aimed squarely at younger audiences. They have the plethora of camera modes and functions, the flagship-grade hardware, and colorful builds that look good at dinner parties. Both sub-$500 phones are also targeted at gamers, things which we’ll eagerly put to the test.

Seeing how both phones hail from the same parent company, Huawei, it wouldn’t be wrong to call them close cousins. You’ll find plenty of design similarities between the two: their front displays are bezel-free and notched to achieve that trending screen-to-body ratio; the USB, headphone, and speaker ports are all arranged similarly; and their rounded fingerprint sensors and dual rear cameras may as well be clones.

Other than the glass backing on the Nova 3i and some minor details — such as the Play having “honor” along the bottom bezel — they pretty much share the same body. That being said, the Play feels better in the hand since it has just the right amount of texture to not become a slippery heart attack, and unlike glass won’t become tacky after prolonged use. Presumably, it should run a little cooler too. 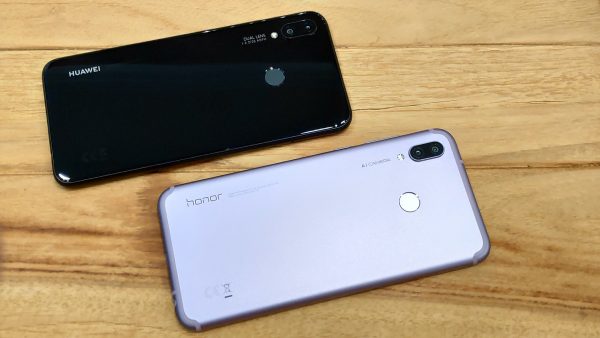 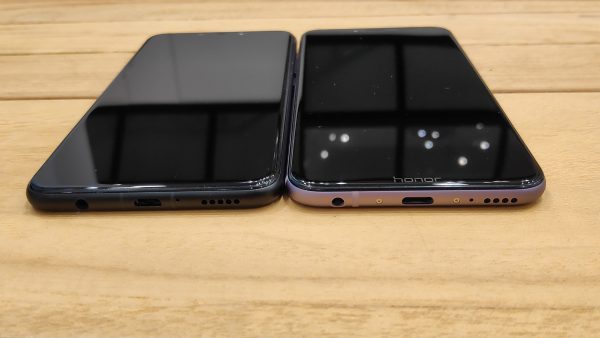 We have the key technical specs of our review units below (both currently available in Singapore).

You’ll quickly see see that, aside from a few base similarities, the Play has been fitted with a higher-end Kirin 910 chipset and an under-the-hood GPU Turbo. That should let it edge out the Nova 3i in gaming performance, though it’ll take some testing to see by how much. Any notable differences would make that $31 price difference seem like a no-brainer, unless you value the better front camera of the Nova 3i.

We did discover something interesting, though. Despite what appears to be matching displays, cranking the screen brightness to 100% revealed a warmer image on the Honor Play. You’d have to put the phones side-by-side to notice, though it isn’t consistent across apps and is very much negligible for gaming.

Our first order of business are the benchmarks. I ran these phones fresh off a factory reset, fully updated (both system and Google), and batteries already full. I also observed a 20 minute cooldown between tests with the phones turned off, to eliminate any thermal throttling that may be in effect.

Our go-to gaming benchmark is 3DMark’s Sling Shot Extreme, designed for high-end smartphones and tablets. It runs a series of demanding graphics and physics tests to push devices to their limit. The former are automatically rendered at 2560×1440 before scaling to the device’s resolution, while the physics tests are done at 1280×720 so that the GPU would not bottleneck results.

The test was choppier on the Nova 3i (4-6 FPS vs 19-22 FPS on Graphics Test 1, for example), so much so that the demo eventually lagged behind the Play by a full eight seconds. The results pretty much speak for themselves, though it’s worth noting that the Play felt much warmer in the hand by the end. 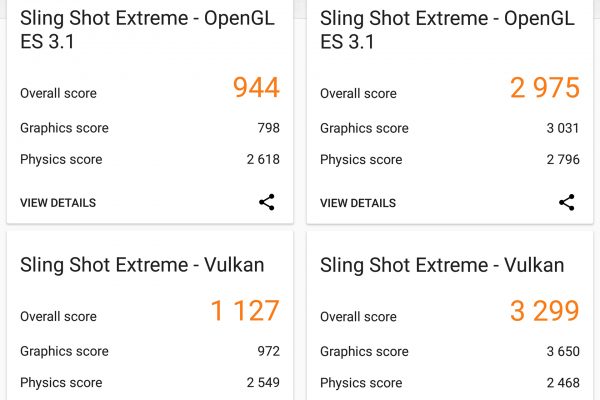 Geekbench runs a comprehensive set of tests to determine a device’s CPU and GPU performance. For instance, their CPU test includes both single- and multi-core workloads at varying tasks such as image processing and compression, encryption, and ray tracing. The Compute test, on the other hand, covers areas of interest such as face detection, RAW file processing, and particle physics.

Our last test was to measure battery performance, and here we turned to Geekbench 4 once again. I ran the partial discharge test (up to 3 hours) after fully recharging both phones, and given the more powerful chipset and GPU Turbo of the Play it’s no surprise to see it scoring lower. After going through this battery test and our gauntlet, both the Nova 3i and the Play had a remaining charge of 57-percent and 42-percent respectively.

Nobody’s going to buy a gaming phone just to ogle at benchmark scores (well, most of us anyway), so we had to get down and dirty with our gaming gauntlet. While the benchmark results have already painted a technical picture, these real-world tests consider the more “human” aspects such as ergonomics, user features, or simple app compatibility. Again, we made the phones rest between different games, this time for 15 minutes.

Asphalt 9: Legends running on the Huawei Nova 3i.

The ‘Freefall (Himalayas)’ is a fun map to play on for a few reasons. The race begins on a steep incline, so you immediately get a ton of speed and potential chaos as cars hurtle down a mountain at breakneck speed. You’re then met by a ramp that sends you flying across a frozen lake, before drifting to the finish line with a few snow-packed turns. It’s short, it’s fast, it’s furious.

Both phones had little trouble running Freefall and later maps (San Francisco, Scotland etc.) on repeat, but the Honor squeezed out a few advantages when it came to responsiveness. The maps loaded faster, the post-race screens went by quicker, and the crashes — which slows down time a la Burnout — was just a smidge smoother to transition into.

This game shouldn’t run in full-screen — the stretched image places interface elements beyond the display’s borders, which doesn’t make for a good look even if you can live with that visual annoyance. I then had to deal with the fact that the cropped image isn’t exactly centered on the device, with more black space towards the phone’s chin. Since these phones wouldn’t let me rotate the game in the other direction, playing with earphones plugged in wasn’t exactly comfortable.

Playing ‘Louder’ on Hard and Expert difficulties threw up some frustrating challenges, particularly with the audio-video sync. I had to tweak the Sound Adjustment setting more than usual when playing with the loudspeaker, but even using earphones the on-screen keys felt “stickier” and off-time with the music. It’s still playable, but you’re going to have to spend some getting comfortable with it.

Dead Trigger 2 running on the Huawei Nova 3i.

The zombie shooter presented no obstacles for either the Nova 3i or the Play, running buttery smooth on the High graphical preset with zero slowdowns. Playing through the Africa campaign on Tech 3 Hard saw me gunning down swathes of walking dead with good aim-down-sights accuracy, and sending boom chickens down choked corridors gave satisfying explosions of gore and loot.

Even intentionally getting surrounded in the generic defend missions did little to put a dent in the phones’ responsiveness, and I found that to be the case for the other missions as well. Whether it was escorting a survivor or making supply runs, the game was an absolute blast to play — until you run into one of it’s few progression gates, of course.

The dreary auto-questing aside, Revolution benefits from being a MMO port with a considerably large user base. The games were set to run at their Best settings across frame rate, graphical quality, resolution, and sound, and the results were fairly impressive. The cutscenes loaded fast, the class introductions were appropriately flashy, and all the visual effects animated smoothly.

While the character models and textures aren’t the best, we do see plenty of crowded action in multiplayer raids and elite dungeons. The Play suffered a few frame rate dips every now and then, but not as often as the Nova 3. This grew especially prevalent during boss battles or PVP, where there are a ton of abilities flashing and dancing across the screen. Neither slowed to the point of being fatal or unplayable, but it was hard not to notice the somewhat smoother experience on the Play.

PUBG Mobile running on the Huawei Nova 3i.

No gauntlet would be complete without a battle royale of some kind, and PUBG Mobile immediately flagged some differences. The Nova 3i defaulted to a Medium frame rate setting and capped out at High, yet the Play defaulted to High and could go up to Ultra. The latter supports HDR graphics too, while the other could only play at HD for now. Both phones needed to have full-screen enabled or face some minor UI cut-off.

Cranking both phones to their absolute highest, we finished a single match on each (approximately 22 minutes per game). The Nova 3i exhibited brief slowdowns when looking at crowds in the lobby or witnessing the red zone bombings, with noticeable building and foliage pop-in while parachuting or driving at high speeds. Lowering to Medium frame rate helped with the slowdowns, though I didn’t finish that match. The Play, on the other hand, ran flawlessly aside from some distant pop-in or strobing textures.

PUBG Mobile gets some extra mention because it’s an official partner for the Honor Play. There’s a ‘Huawei Histen sound effects’ menu in the phone settings, available only when a wired headset is plugged in, that adds a touch more depth to the 3D audio. I wouldn’t call it a game-changing difference but it is there, and the feature seemed less exciting in the other games. What is more exciting is the unique ‘4D Smart Shock’ setting found in the Game Suite app, providing customized vibration patterns that feel pretty good. It’s like playing with a controller, the Play rumbling along to different weapon fire rates or reacting to explosions. Neat stuff!

Like the close cousins they are, choosing to game on the Huawei Nova 3i or the Honor Play wouldn’t result in disappointment. They both pack the requisite hardware to play the latest 3D games, managing stable frame rates with good image and graphical quality. However, the Play’s GPU Turbo and 4D Smart Shock puts it a few paces ahead of the Nova 3i; combined with the marginal price difference, the Play certainly makes for a better gaming pick. An odd outcome when you consider how Huawei is promoted as the more up-market brand of the two.

But that’s just looking between the two models. From a larger gaming phone perspective, both the Huawei and Honor don’t revolutionize the modern smartphone. The down-firing speaker and earphone port continue to be downright frustrating, the phones get considerably warm after a half hour of play, and there still isn’t a smart way of juggling calls and notifications while gaming.

Rather, their role seems to be making high-end gaming accessible to the mid-range crowd, which is admirable in itself. It’s not so much a factor in affluent countries but for the developing markets of SEA, that spells for some interesting growth for mobile gaming as a whole.

The Huawei Nova 3i ($398) and Honor Play ($429) are now available in Singapore.
Units were provided for review.

Ade thinks there's nothing quite like a good game and a snug headcrab. He grew up with HIDEO KOJIMA's Metal Gear Solid, lives for RPGs, and is waiting for light guns to make their comeback.
Previous post It’s not over yet, Bethesda site leaks customer information
Next post Review – Mortal Engines could have been Peter Jackson’s next big trilogy