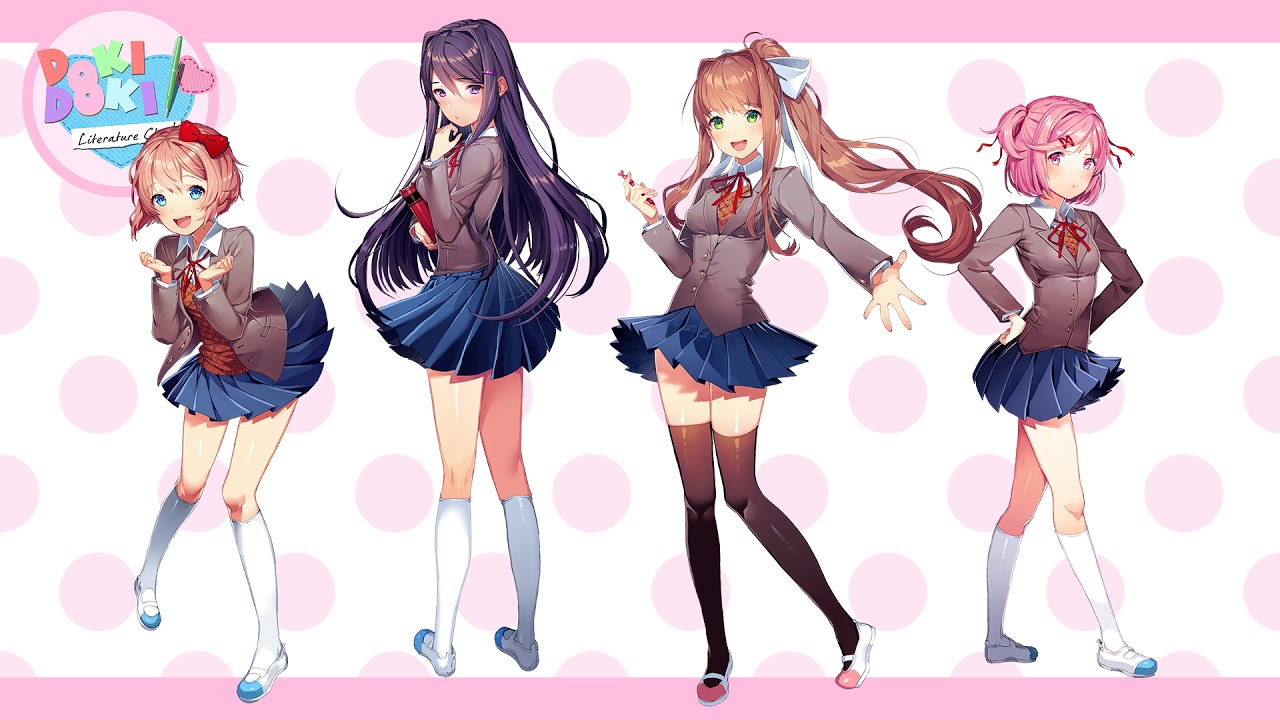 Games are meant to test you on something, be it reflexes, nerves, dexterity, etc., and often pit you against others to see who measures up. A visual novel is different; it’s a mildly interactive experience, meant to engage and immerse.

I’ve played a couple of visual novels before, but they’ve never really captured my attention past the half hour mark. More often than not, the cute anime girls aren’t enough to get past the pointless conversations, which seem to only be there for the sake of extending game time.

This article is for:

Doki Doki Literature Club, however, is a fantastic visual novel.

It starts out like any other, with cute girls across your screen, a cute, upbeat background song, and a twinkly voice saying “Doki Doki!” (IT’S A TRICK, DON’T FALL FOR IT). As you progress through the story, your dating-sim-primed mind starts to choose the girl you’d like to get with. Perhaps it’s Sayori, the literal girl next door you’ve known for years, cheery to an annoying degree; Yuri, the one with long purple hair and an almost-psychotic quality when she talks about literature; Natsuki, the classic trope of the girl who can barely keep up a fierce façade to disguise her vulnerability; and Monika, ruler of them all.

You would think you could choose, but developer Team Salvato spits in your face by giving you the illusion of choice before steering you towards an extremely cleverly disguised, linear path. It will always end the same way. The first jump scare isn’t a cheap shock like most – you find out that the happy-go-lucky Sayori you’ve known since childhood is hiding a crippling depression, and from that moment on an apparent tension builds. When she’s not in school the day after she confesses her love for you, how can you not be concerned? As you head towards her room to check on her, the music gets softer and your footsteps get louder, until you see her hanging by her neck.

It’s not just about the rapid change of pace, despite how skilfully done it is to breed your sense of dread (and yet does nothing to prepare you for it). What’s truly scary about this visual novel isn’t just the familiar elements that were executed well, but the insidious concept introduced slowly… and then all at once – the loss of control. It will always end the same way. This isn’t a game where skills matter, but simply an experience you must sit through.

Every line is written with intent and purpose, and so you go along while unconsciously ignoring the feeling that there was something slightly off about that last sentence you just read. Doki Doki underhandedly utilizes elements that we are familiar with to start us off in our comfort zone, before the abrupt ending of Act I hits you like a ton of bricks.

When Act II starts, it leads you to think the game files are somehow corrupted due to missing save files and visual glitches. The only option is to “start a new game”. See a pattern in linear progression? The same opening scene greets you, except that now Sayori’s extinction succinctly sums up that this is how it’s supposed to go. The same script that seemed a little out of place initially is now repeated and read with full understanding, while the cheery background music starts taking on an ominous twang. The glitches progressively increase, both in frequency and intensity, without ever losing its efficacy despite the player lowering the volume – I should know.

By this time, the interplay is so obvious you can only watch on in morbid fascination as Monika tells you in quiet confidence that Natsuki will forget her fight with Yuri the next day. And she does! Right before Yuri stabs herself and Monika deletes them both.

In Act III it’s just Monika and you in a classroom, a trippy scene of a swirling galaxy outside. She confesses her love for you just like the others did. Way to go stud. Not you in the game though. But you, the person playing it Team Salvato has broken the fourth wall and then your spirit by mentioning your real name. It almost feels like an assault. An oddly-specific instruction strongly hints at the next step you should take, which is to delete her character file, leading to the epilogue. I’ll leave it to you to figure out who’s missing from the cast.

These three hours are so cleverly done that you can only sit back and marvel at how it played you. I have not touched it since the first playthrough – my heart can only take so much.

I'm better at games than I am at writing, I think.
Previous post Final Fantasy Awakening is a legitimate entry for fans
Next post Art of Fighting soundtrack remastered for its 25th anniversary