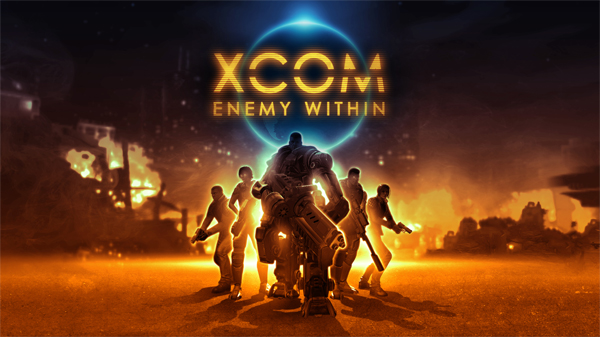 XCOM: Enemy Unknown could have been brilliant. Firaxis’ reboot was sleek, fun and drew a wide audience, yet certain design decisions left the game feeling flawed. Those frustrations, compounded by the lack of a free play mode, made the game’s appeal fade faster than it should. Here comes XCOM: Enemy Within, a long-awaited expansion. It’s great but it doesn’t fix all the problems.

Enemy Within’s elements weave into the campaign itself, instead of forming a separate one. Additions of import are units for both races, as well as a hostile human group called EXALT. The latter involves an endeavour that spans nearly two-thirds of the campaign, although they’ll never prove a greater threat than the aliens. There’s a lot of promise behind the EXALT idea. They are the only other militant force that manages to fend off, and adapt from, the aliens. The difference lies in their agenda: to let the invasion set the stage for their world dominance. It’s a shame then, that the concept isn’t fully explored within the game.

EXALT missions are refreshing from a tactical standpoint – they generally outnumber you – but the AI exhibits a curious lack of cooperation that isn’t seen with the aliens. In combat these agents act independently, never working as a team to exploit their numerical advantage. Outside of battle, the hunt for EXALT quickly settles into a dull routine of sweep-insert-attack that ultimately rewards you with an anti-climactic raid on their headquarters.

I expected more from the studio behind Civilization. A rival faction for you to compete with in terms of research and upgrades would have been exciting. Imagine losing favour with a country by not providing adequate protection, only to have them back the EXALT instead.

As it stands, the EXALT seem like a longer add-on mission than any real contribution to the campaign. Perhaps circumstances limited the developers’ options, but this is a huge missed opportunity for improving the underwhelming strategic aspect.

The real game changers are Meld, a new resource, and XCOM’s new laboratories. Both are introduced early in the campaign and immediately open up a breadth of strategic options. Genetic modifications are incredibly useful if you can afford them but the real fun starts with the first MEC Trooper. I went with a Kinetic Strike build and strongly recommend you do too. The rocket-assisted punch is always satisfying, and it packs enough power to single-handedly take down any enemy right up to the mid-game.

On Normal difficulty, this will prove too easy. Short of running at the enemy, the MEC Trooper’s presence significantly increases squad survival rates. It has enough health to take a few shots while the melee ability basically kills most targets in a single hit. Even towards the late-game, I found myself using the Kinetic Strike to decisively finish off weakened enemies.

As such, playing on Classic would be the preferred option if you’d still like a challenge. Just be aware that higher difficulties tend to grant more accurate shots to the enemy, which can be infuriating in certain conditions. I’ll get to that later.

In contrast, the aliens only get two new enemy types. The Mectoid serves as their version of the exosuit and Seekers hunt lone soldiers to punish static squads. They’re both great additions to the roster but don’t stack up against what XCOM gets.

I would have preferred having more enemy variants or going against more abilities, solely to exemplify the necessity of gene-modded squads. Without that challenge, it feels like I’m running a group of super-soldiers sometimes. It goes against the theme of desperate survival, as well as losing the ethical impact of permanent body alterations.

Raising the difficulty is an option but, as mentioned, it skews accuracies against you in baffling ways. It’s manageable on Classic but go any higher and you’ll notice soldiers missing shots far more often, even easy ones. This is one of those issues carried over from the base game, made worse by line-of-sight and cover mechanics that are only explained by the hardcore community on 2K’s forums. If a player can’t take a seemingly easy shot and doesn’t know why, then Firaxis is taking away too much information.

Despite all that, I’m still recommending it.

What Enemy Within does right is with its content, particularly the maps you fight on. There’s a great variety added to the rotation now, so much so that repeats become uncommon. That includes missions involving crashed UFOs, so say goodbye to that one particular forest.

The expansion introduces a couple of set-pieces as well, the most famous being XCOM’s base defence. These are all scripted affairs but it doesn’t take away from the tension and excitement of unknown territories. As they’re linked to plot points, you’ll run into them once certain conditions are met.

Other improvements comprise of tweaks to gameplay, better soldier customisation, and the ability to save different squads for multiplayer. All are welcome features though special mention has to go the last one – it’s a huge time saver.

I’ve only come across one new bug, where a Cyberdisc took over eight seconds to force its way through a doorway. Aside from that, Enemy Within has largely been a smooth experience, even in multiplayer. Your results may vary but I haven’t heard any technical complaints from my opponent either.

XCOM: Enemy Within improves what is essentially a great tactics game. It isn’t perfect; then again neither is the base game itself. There’s lots of incentive here to make you replay the campaign and maybe even try some multiplayer. How much replay value this has added is still a mystery at this point, but I’m certain the new experience will pay off in the end. Besides, MEC Troopers are completely worth it.

Developed by Firaxis Games and published by 2K.

Ade thinks there's nothing quite like a good game and a snug headcrab. He grew up with HIDEO KOJIMA's Metal Gear Solid, lives for RPGs, and is waiting for light guns to make their comeback.
Previous post PlayStation US Launch Event Teases New Uncharted Game
Next post Goodbye Deponia Now Available on Steam