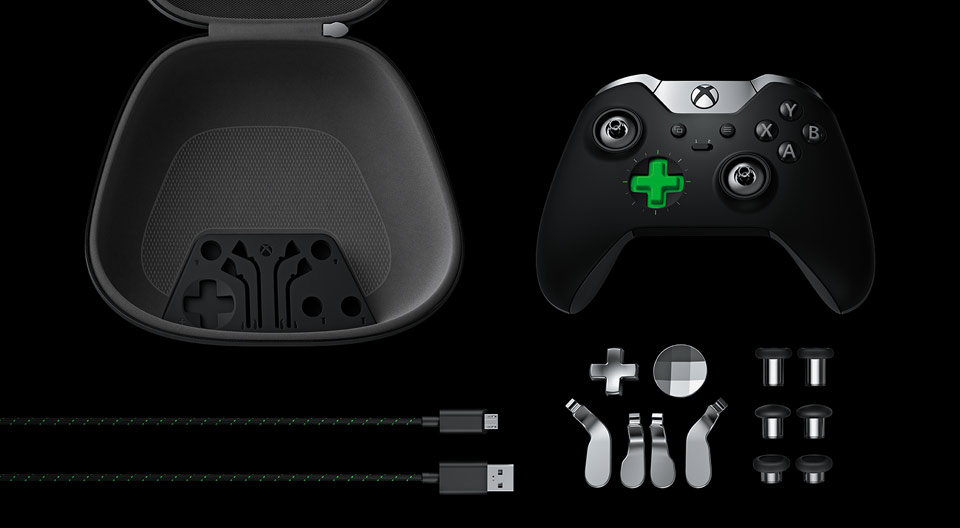 Way back during the days of the Xbox 360, Microsoft came up with the idea of introducing an Elite line of Xbox 360 consoles. In those days, all Xbox 360 units were white, so the newly announced black Elite Xbox 360 units stood out from the crowd. Boasting a larger HDD, a black Xbox 360 chassis and a black controller, the Elite hardware soon became the standard Xbox 360 hardware as the years progressed.

The Xbox One Elite controller is bar none, the greatest controller money can buy currently. It takes every single aspect of the already excellent Xbox One controller, kicks things into overdrive and then sets it on fire, resulting in a controller of mythic proportions.

The controller not only comes in a nifty box, it even has its very own carrier, with slots for the modular buttons all arranged nicely inside. The carrier itself is sturdy and solid, and feels extremely similar to those one might get from buying high end headphones. If you want to bring your Xbox One Elite controller to your friend’s house or to tournaments, the carrier makes it incredibly easy to do so.

On initial visual inspection, there might not seem to be any significant change to the Xbox One Elite controller over the normal Xbox One controller. The buttons are still in the same places, the contours and shape remain unchanged. Only the colors seem to be different. Take a closer look at the device though and things start to stand out.

For starters, the controller is a bit heavier than the original Xbox One controller. The added heft and weight makes it feel more substantial and aren’t detrimental to the controller in any way. If anything, we actually prefer the heavier weight of the Xbox One Elite controller in our hands, compared to the relatively lightweight normal controller.

Another change is that the face buttons (X,Y,A,B) are now grey, no longer the color coded inputs like those found on the normal controller. That’s fine; the color coding was mainly for beginners to grasp what the buttons did and their placement.  These buttons, like the shoulder buttons and the triggers, aren’t modular, so you can’t swap them out if you prefer the brightly color buttons of the original controllers.

Still, if you’re using the Xbox One Elite controller, Microsoft (rightly) assumes that you can press the buttons without looking down or depending on colored prompts.

It’s clearly made for the hardcore gamer.

You know the Xbox One Elite Controller is on a whole different level when you realize that it comes with its own customization suit app on the Xbox One and Windows 10. The app lets you configure and reassign all the buttons, vibration intensity as well as adjust sensitivity settings and create profiles, which can then be saved on the cloud or in the controller itself. In fact, in a rather inspired move, the controller has space for two different profiles with a switcher that lets you toggle between profiles on the fly. This is great if you’re constantly changing games or are playing games with multiple gameplay styles – e.g., fighting games.

One of the biggest changes on the controller comes in the form of the modular analog sticks and d-pad. The tops of the sticks and d-pad are now easily removable. They’re held securely in place by magnets and won’t come off during gameplay, but removal is simply just a matter of pulling them out of their sockets.

Once removed, you can swap the tops for a handful of different styled caps.

The new D-pad comes with a circular, plate-like cap, which is incredibly useful in fighters. In fact, if you play fighting games regularly on a controller (instead of on an arcade stick), it is worth spending the money for the controller JUST for this feature as doing motions on the d-pad is much easier and more intuitive.

For the analog sticks, there are more options, though they’re much more traditional. The Xbox One Elite controller comes with three different cap types; concave, convex and flat. Concave caps are like what most controllers feature, with the tops caving inwards to create a depression. Convex caps are reminiscent of early Sony DualShock controllers for the PS1. Finally there’s also the flat analog cap, like the one found on the Nintendo 64 controller. Whereas the other two caps are curved, the flat cap is exactly as it sounds, with the top flat.

Our favourite are the concave ones. With their depressions, these tops hold the thumb more securely than the others, especially if your palms and fingers are prone to sweating. Others might prefer a different top, but no matter what is chosen, the fact remains that all of them are solidly made and feel great in use. That’s because the analog stick, as well as the caps are now made out of metal, which gives them a great premium look, as well as feel. More importantly, unlike the plastic sticks used in the original Xbox One controller, they do not wear out from prolong or hard use.

The other aspects of the controller, the triggers (or RT and LT buttons) have also been given a few tweaks to make them better. They now come with individual hair trigger locks, which allow them to register button presses with even the slightest pressure. You can turn them off if you prefer, but we found them useful in FPS multiplayer games like Halo 5.

The biggest change for the Xbox One Elite controller is that it can be outfitted with paddles. These can be configured in the app to serve any function, be it as alternates for the face buttons or triggers. They take some getting used to, but are really handy for games where you need your hands to be on the triggers at all times. We loved using them in Halo 5, allowing us to melee, jump and shoot all at the same time without moving out fingers around. The paddles slip into their groove easily, without needing special tools so you can just plug them in or remove them whenever you want. Once connected, they remain securely in place too, so there’s no issue of them accidentally slipping out.

Finally, the Xbox One Elite controller also comes with the new 35mm audio jack found in the newer Xbox One controllers. This allows you to plug in any supported headsets without the use of specialized adapters. It’s a much requested feature from Xbox One players and it’s nice that Microsoft has applied it here as well.

At $194.90, the Xbox One Elite controller is definitely not an impulse buy. Despite how the features can be advantageous for both the newbie and hardcore, only the hardcore will truly appreciate the nuances the controller provides.

It doesn’t take a genius to figure out then, if you count yourself among that faction then the Xbox One Elite controller is definitely for you. The features it offers make it a must-have for any hardcore gamer, even if the price can seem prohibitive for many. The Xbox one Elite controller is easily the best video game console controller from any platform to date, bar none.

Aaron Yip is an industry veteran with more than 15 years of experience. When not spending time on his gaming PC and consoles, he can be found in Hyrule solving ungodly puzzles and collecting gems.
Previous post Overwatch releases on 24 May but you can try it out this weekend
Next post Review: Disgaea 5 Alliance of Vengeance (PS4)