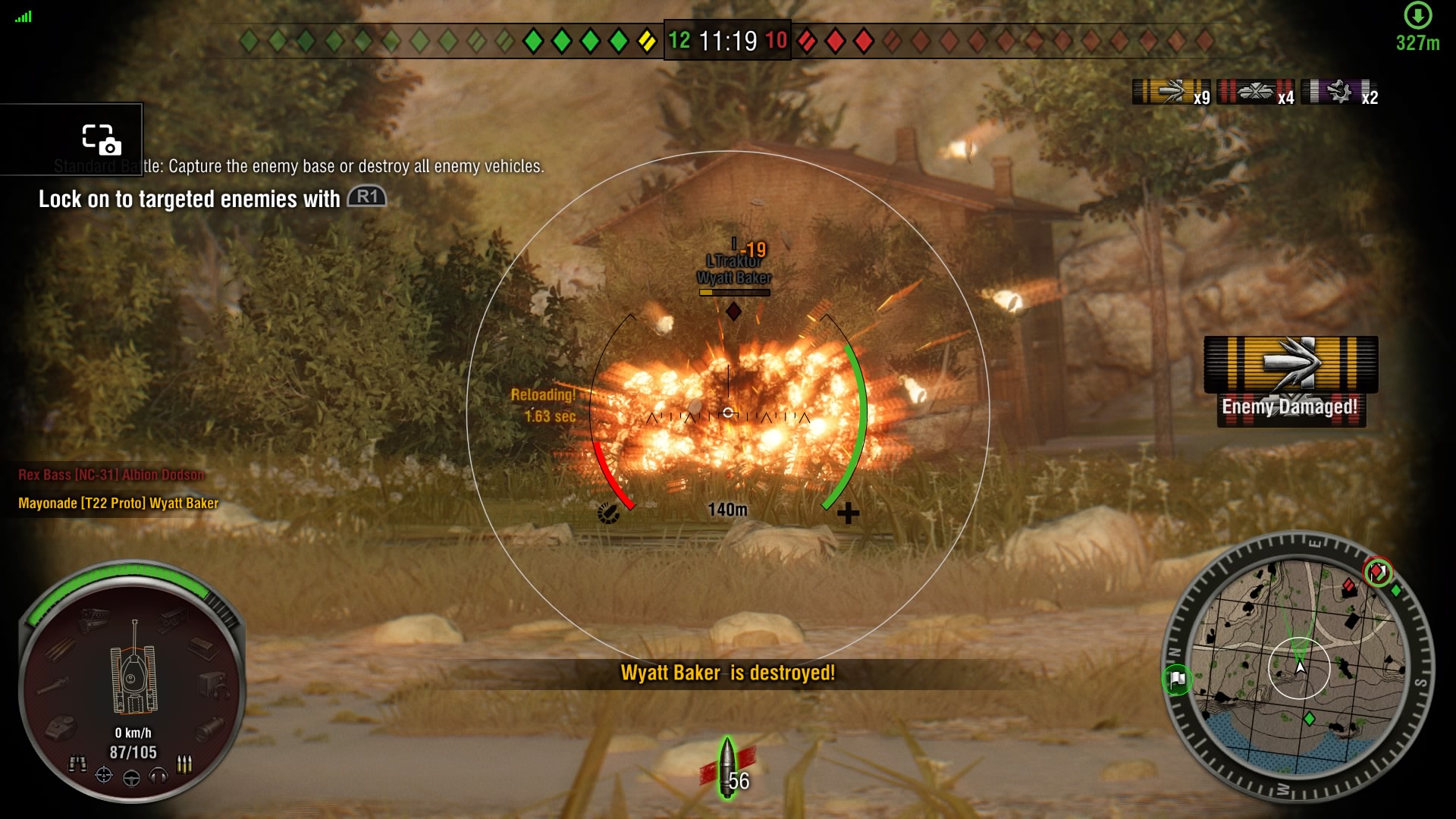 World of Tanks is the Need for Speed of armored warfare. It’s simple to pick up, arcade-like in its handling, and all about the pursuit of pricier models. While fundamentally no different than its PC progenitor, this PlayStation 4 version changes just the right things to make tank combat all the more explosive for our living rooms.

With shells decimating the ground, sparking off armor, or simply blowing up their targets, it’s obvious that World of Tanks can be an immersive game, in its own industrial way. For PlayStation 4, Wargaming emphasizes the action by pulling the camera in much closer, mimicking the third-person vehicle views of the Battlefields and ARMAs out there.

That had an unexpected side-effect. Rounding a corner or cresting a hill now feel far more dangerous thanks to the limited field-of-view. Inching past cover has always been a risky affair, and without the freedom to swing the camera around for a peek, dueling on the frontlines has gotten a whole lot more exhilarating.

To compensate, a silent alert goes off whenever I get spotted, conveniently letting me know when to stop and retreat; PC players will recognize this as Sixth Sense, a crew skill that had to be painstakingly unlocked.

This doesn’t quite clash with the trepidation about corners and hills I mentioned earlier because enemy guns are already pointing your way during firefights. Rather, how it compensates is by giving lighter and faster tanks room to be daring in the opening moments, be it flanking maneuvers or scouting runs. They’re crucial in getting the match started, helping to point the way for their slower and beefier teammates, and thus speeding up the game.

Before we delve any further let’s go over what World of Tanks actually is. The free-to-play online game pits two teams of fifteen players against each other on a random map, either to battle over an objective or to annihilate the opposing force. Each team is comprised of different vehicle classes, ranging from zippy light tanks to static artillery, all of which have a role to fulfill.

Things get a little more complicated once equipment and crew come into play, but newcomers have it good these days. World of Tanks on PS4 immediately begins with a tutorial, putting players in an all-rounder medium tank against bots to showcase everything necessary to get started. Additional information is liberally doled out during loading screens, explaining armor values, ammo types, concealment, and everything else to truly succeed in the game. The rest boils down to experience.

As with all team battles, communication is key. World of Tanks has an adequate dialogue wheel but using it is a different matter. To select an option I have to use my thumbstick, the same one used to drive the tank. It’s as frustrating as it sounds. A better solution would have been to use the trigger and face buttons together, which is not only faster but leaves the crucial driving and aiming thumbsticks alone.

There’s voice chat, sure, but the Asia server is typically quiet and all I’ve heard so far was the occasional hello, background noises, and labored breathing – I even heard a lion dance once, which helped prove that the mute function works.

Didn’t even scratch him

I didn’t care much for the thumbstick aiming, either. Wargaming isn’t guilty of this particular hardware limitation and it performs fine for the most part, although that doesn’t mean it’s free of potential issues.

World of Tanks features shell ballistics, with penetrating power reduced over longer distances. Combine that with armor distribution and you run into a situation where only certain parts of the enemy tank become viable targets. If they’re behind a hill then I’m literally trying to aim for the commander’s hatch, which is where my main struggle should be, not with the controls. This extends to close-up brawls as well, as the high armor on some tanks makes them impenetrable in places, even with high caliber guns.

This isn’t a strike against the game because it’s a platform problem, and even then it’s one that’s highly subjective . Chances are there are players out there happily scouring the battlefield, incredulous at my claims. For what it’s worth, I chose to spend most of my time in light and medium tanks instead.

Progress for our nation

Progression in World of Tanks falls to the various national tech trees, which at the time of review are the USA, UK, Germany, and the USSR. To climb up these ten-tier trees, players have to unlock a number of parts for their current tank.

In the PlayStation 4 version, Wargaming streamlines things a little by bundling parts into packages. These show boosts to firepower, speed, health, and so on via a big fat symbol, but it hides away too much detail, especially where guns are concerned. You’ll want to hit the triangle button to see gun information such as rate of fire, accuracy, penetrating power, and more, all of which help determine the tank’s play style.

If all you have access to is the PlayStation 4 version then great, you’re already in for a well-executed ride. The game is free-to-play, doesn’t require PlayStation Plus, stable, and is an absolute blast to play. Not to mention the years of new content waiting in the pipeline. There’s no reason not to give World of Tanks a shot.

Players who have access to the PC version shouldn’t dismiss this console version. You’ll have to start over from scratch, yes, but the experience is completely different – I recommend playing a nation or class separate from your primary vehicles on PC. Besides, there’s a novel charm in seeing only four nations on the battlefield with a tweaked meta at play. Oh, there’s great mini-game too!

World of Tanks is an online, team-based tank combat game available for Windows PC, Xbox One, and PlayStation 4. The version featured here is exclusive to the PS4 system.

Ade thinks there's nothing quite like a good game and a snug headcrab. He grew up with HIDEO KOJIMA's Metal Gear Solid, lives for RPGs, and is waiting for light guns to make their comeback.
Previous post Go on a yarn-full adventure with Unravel
Next post Super Robot Wars OG Moon Dwellers gets English localization for SEA