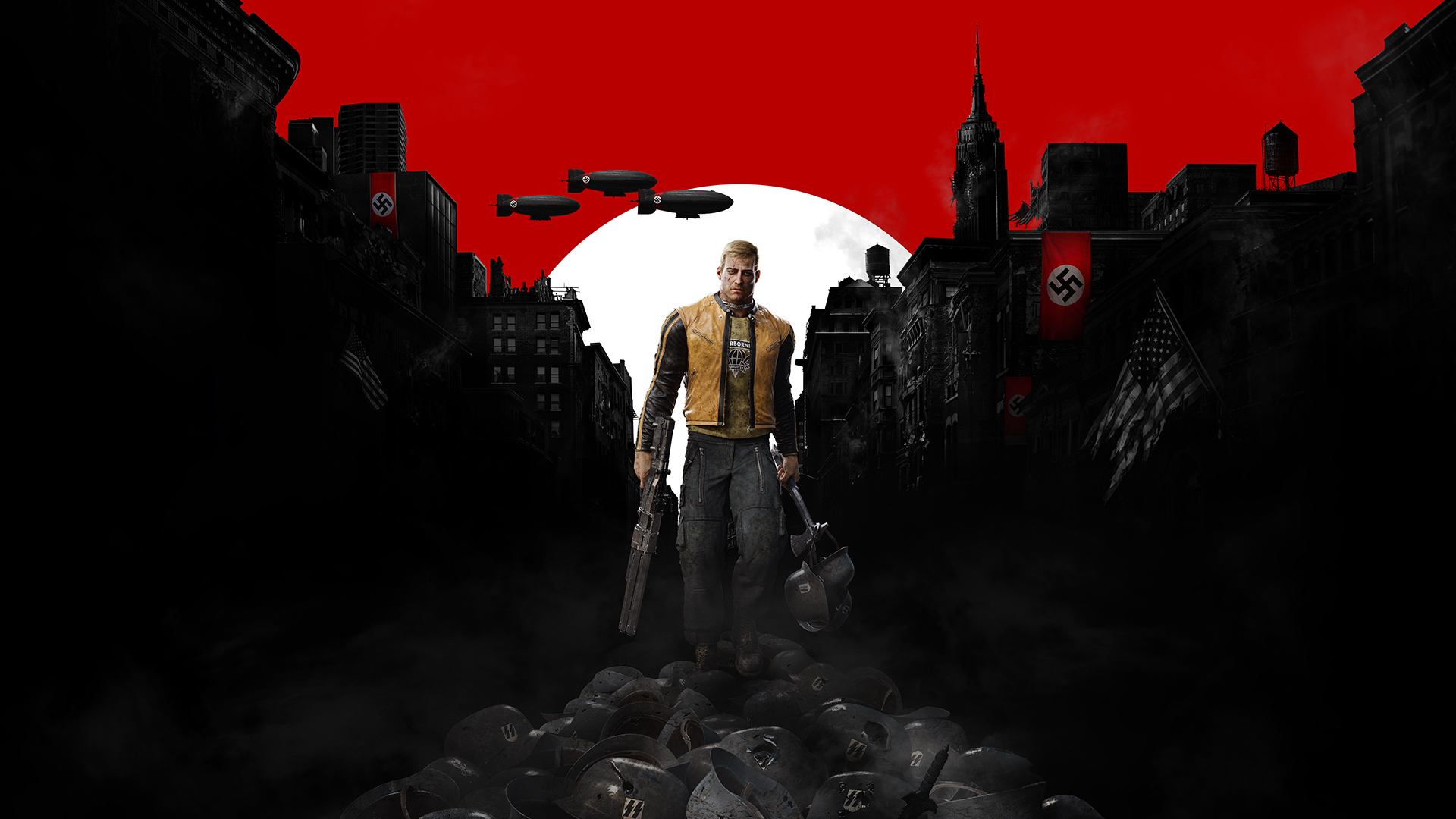 BJ Blaskowicz is the epitome of the Aryan Übermensch: blond, steel blue eyes, big as a house, and with the chiseled features of a Greek god. How ironic then that BJ is also the biggest threat the Third Reich has ever faced. Playing through Wolfenstein II: The New Colossus, I can’t help but wonder that maybe the greatest WWII superweapon was human after all.

Wolfenstein II picks up immediately after 2014’s Wolfenstein: The New Order, where BJ is left for dead after the final battle with Oberführer ‘Deathshead’. Instead of visiting the afterlife, he’s rescued at the last second by the whole gang, whisked away to the Eva’s Hammer for some desperate surgery.

The first ten or so minutes is nothing but horrors, as BJ swims in and out of consciousness. At one point, he wakes up right as they’re talking about cutting most of his intestines to save his life. It drives home the point that BJ Blaskowicz is mortal, and that he’s living on borrowed time.

When the game starts, BJ has already been down and out for five months, his muscles heavily atrophied. Despite losing the ability to walk, he amazingly has no issues holding a gun. So what does he do? Grab a wheelchair and go on a Nazi killing rampage. To say that that the experience was strange is an understatement. The wheelchair controls take a bit to get used to but, luckily, the first stage is pretty forgiving compared to the rest.

Make no mistake – even on Normal difficulty, Wolfenstein II is hard. Enemies don’t fool around and can have good aim, so you better be up to the task. While armor and health kits are abundant, BJ only has 50 health points for the first five or six hours of the game. Health doesn’t regenerate fully, either, so dying is a very real possibility. That brings us to the game’s first glaring flaw: there’s no Quick Save feature.

Die (which you will) and you’re forced to wait at least ten seconds to load. This is on a PS4 Pro with a hybrid hard drive too, so if you’re on stock hardware chances are the wait’s even longer. Also, accessing the menu to manually save quickly becomes an annoyance. This is especially irksome when you consider that stealth is practically a must to survive some levels.

Like The New Order before it, Wolfenstein II has enemy captains who can call in reinforcements. If somebody sounds the alarm by spotting you or hearing an unsilenced gun, you can expect to fight a sea of jackbooted soldiers. Rushing them is possible on lower difficulties, but unless you’re heavily armored and overcharged with tons of health, it’s simply not feasible. What that means is a trial-and-error approach to sneaking, where you must slowly creep and manually save every few minutes to reasonably progress. Otherwise, you’ll have the entire Third Reich bearing down upon you.

Why not avoid the captains? Because you’re awarded an Enigma card for each one you kill. These cards unlock optional missions later, so missing out on a couple potentially means shortchanged gameplay.

For a first-person shooter, Wolfenstein II has a surprising amount of depth. Your kills, and how you do so, levels up perks that grant passive modifiers such as carrying more ammunition or moving faster when crouched. If you don’t mind the tedium, you can farm certain sections to raise specific perks. There’s a mindboggling number of these available and, while they don’t affect gameplay too much, they do add a touch of progression.

Along the way, you’ll get to improve your arsenal. Each weapon has three upgrades that you’ll need to think long and hard about. Prefer a stealthy infiltration? Then you’ll want suppressors for the pistol and machine pistol. Want to deal massive damage? That means modifying the shotgun to fire three shells at once. Wolfenstein II also lets you dual wield most primary weapons, so you’re free to gun down Nazis with akimbo shotguns.

There’s plenty of gameplay variety aside from that opening wheelchair stage, too. There’s one where you’re locked in a small arena, buying time for a resistance cell to escape. In another, you’ll need to move fast as radiation continuously drains your health. If variety is the spice of life, then Wolfenstein II is a great tasting dish.

Each stage is bookended by cutscenes that further drive the story. Unlike most shooters, the plot is surprisingly good, full of believable and likeable characters; when some inevitably fall, you’ll feel their loss too. There’s also plenty of great dialogue – I especially enjoyed the prayers BJ says to Caroline, asking her to watch over him. The score, however, could use some work. I suppose it’s fine as incidental music, but it never got my blood pumping even when it was supposed to.

Though most of Wolfenstein II is linear, it does open up once you unlock the Enigma Machine aboard Eva’s Hammer. This is where you access assassination missions using the cards you acquired from dead captains, rewarding items not found within the regular campaign. While optional, these harder missions do bring new levels to play in.

Either way, you’ll be mowing down countless waves of Nazi soldiers. Sadly, while they look cool, the limited number of archetypes makes them predictable. It’s a shame that cooler enemies like the Panzerhund, a tank-like robotic dog, only appear in certain stages.

Combat, however, is far from shameful. With the buttery smooth 60 FPS, running and gunning has never felt more fluid. There are no noticeable framerate drops or visual tearing, and the character models look great. Melee kills are satisfyingly gruesome, and the various weaponry is incredibly fun. Still, nothing beats the satisfaction of a long-ranged, one-hit kill using the hatchet. Enemies may die by the dozens, but it’s the sweet kills that makes the game memorable. Following up on Wolfenstein: The New Order isn’t an easy task. Despite having little hype, the previous game and its expansion are widely regarded as one of the best FPS experiences this generation.

Wolfenstein: The New Colossus doesn’t just live up to the legacy – it is, in many ways, a step up. It’s more visually distinct with a plot that rivals Hollywood blockbusters, giving life to a character that’s unlike many others: a vulnerable super-soldier. While BJ may never have the draw of Master Chief, Kratos, or even Nathan Drake, Bethesda has succeeded in creating an iconic hero of their own. Hopefully, he’ll get to take his place among gaming’s most recognizable heroes. Until then, he has more Nazis to kill.

Wolfenstein II is developed by MachineGames and published by Bethesda Softworks, available now for PC, PlayStation 4, and Xbox One. A copy was provided for review.

Sal's just your average hardcore gamer. He started gaming on the NES in the 80s and has been ever playing since. Sal doesn't care about which platforms games are on, only that he wants to play them all!
Previous post Review – Call of Duty: WWII (PS4) single-player campaign is a welcome return to its roots
Next post The Great Lego Race: Riding the world’s first VR roller coaster