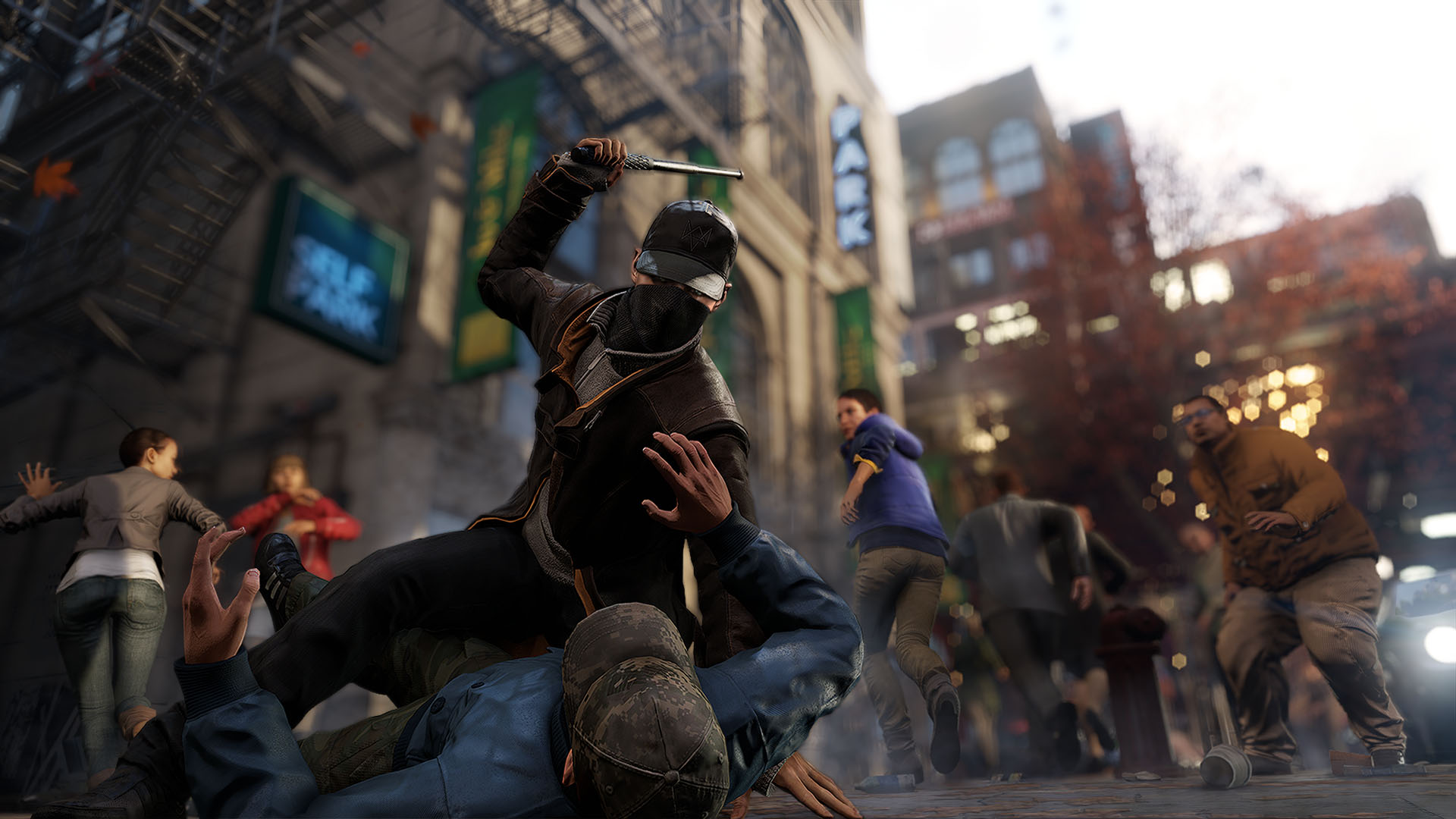 I don’t know what you think the title should be, but I say the underscore should be part of the title.

You could summarise Ubisoft’s hot new hacker game to be one where Assassin’s Creed meets Grand Theft Auto meets Deus Ex: Human Revolution. It is mainly that, but there’s more to it.

You play Aiden Pearce, the weird fellow with the trenchcoat, because nothing is more inconspicuous than a person walking around in a trenchcoat. Aiden is looking for answers, and like most of us living in today’s world of modern technology, all his answers can come from his trusty smartphone.

The city of Chicago is all wired up, you see. A giant security network called ctOS blankets the whole city to watch over it and help monitor crime, utilities and the like. Taking from the themes of recent current affairs the likes of Edward Snowden, LulzSec, Anonymous and the NSA spying scandal, no network can go unpenetrated and ctOS is just an vulnerable as any commoner’s network, at least through the eyes of Aiden Pearce.

Through your smartphone, you can hack the vulnerable objects around you, such as blowing steam pipes, overloading switch boxes to explode, change traffic signals and raise security bollards. Use all of these to your advantage when evading pursuers or when doing the chasing yourself.

You can also profile each individual and see their quirks in one-liner descriptions. More importantly, profile these individuals to get their banking information for a quick buck off an ATM or tune into their phone conversations to uncover potential side-missions for crimes and valuable pickups.

Most of the city’s networks cannot be broken into by you until you take over a nearby ctOS centre, which you do at several points of the game. These ctOS centres are riddled with armed guards, and you are just one guy. You can either go in guns-blazing or do it the stealthy way picking them out one by one by blowing up the explosives they are carrying, causing distractions, or piggy-backing on their personal carry-around security cameras until you spy the little box you came to hack.

This triggers a hacking minigame, for which Deus Ex: HR fans might be familiar with, although the puzzle here is simpler than having to use viruses to slow down detection software. Break through that, and you’re in. You have to do this for every district you need to unlock, and it proves more challenging than the one before, which keeps it fun.

There are no consequences going in fully-loaded, except that you have a higher chance getting spotted and allowing a “You aren’t supposed to be here” detection triangle to fill up and forcing them to call in more men to take you down. Then again, you can apply a bit of stealth and pick them out one by one via silenced pistol. The AI doesn’t seem to mind that very much, and they appear unfazed.

The game is lacking where it counts with the AI. You would think that their partner I just took out in front of their very eyes would be more responsive but even with a few missed shots at their head, they turn out to be just as easily taken out like all the others. When they do detect you, they sometimes constantly shoot at you even when you’re hiding in cover, and won’t stop until you actually pop a few bullets into the trigger-happy gunman.

Vehicle handling is not quite what you would expect when you’re used to, say, Grand Theft Auto V. Vehicles you run into with your car are comically pushed aside or flung backwards across the street. I’m not sure if that was Ubisoft’s intention to remind you that this game is not real. There is also quite a bit of “lost” moments when you aren’t told exactly what to do and where to go to reach your intended terminal to hack, so you are left fumbling about, avoiding detection until something clicks in your head and you eventually make it to a once inaccessible area.

You can pull an Ezio and park your car to hide inside, blending into the street and leaving the bumbling police AI to just drive past you until you completely avoid their detection (Fictional Chicago’s finest must have Templar blood in their veins). All of this makes Watch_Dogs rather smooth-sailing for the most part, until you face some bugs and glitches.

There were some graphical loading issues during my time with Watch_Dogs. These ranged from the blocky ATM machines to the broadcasts over the radio that overlap news with a message from hacker group DedSec. One mission in particular was a little funny because I made through the rest of the mission and to the next related one without the need of taking the target out as instructed, with Aiden recalling himself implying a kill was made at the location, when that never happened. You can take several ways of doing things in some missions, like one where I had to guide a gang member to safety via remote camera, but this felt like a confusing glitch.

If you’re tired of playing with the AI, you can hang out with other players, or they can find their way into your game. One immersive aspect of Watch_Dogs is the online multiplayer mode that brings players into your game (or you into theirs) and have them track you down, steal your data or collect a bounty placed on your head. If you’re alert, this usually ends up with a bit of a car chase unless you blow up your attacker’s vehicle with your trusty grenade launcher.

A quick download for iOS and Android, ctOS Mobile offers you a chance to play with your friends or with total strangers online through your mobile device.

You control a police helicopter from which your on-board sniper will slow down and take out your opponent in the red car on your map. You can also raise bridges and security bollards (like Aiden would in-game) or further dispatch pursuit vehicles and SWAT teams.

The app could be made better if I didn’t have to head to an external browser just to sign in to PSN and come back, especially frustrating when running on an older iPhone, which calls for the need to have the app reloaded when you return. There are also some connectivity issues which have eased up since launch.

Another aspect of Watch_Dogs is ctOS mobile (see sidebox), a free, mobile-based counterpart of the game where mobile users can enter your game through a simplified version of the game’s map on their smartphone or tablet and play cops and robbers over the internet without ever needing a copy of Watch_Dogs.

There is are also plenty of side missions and mini-games in the game, like Cash Run, where you try to beat the timer and pit your urban running parkour skills to the test, avoiding skulls and collecting coins in a sort of AR game. Stop crimes by blowing up a target in the middle of a convoy or beating the crap out of a random street thug.

Having faced the PlayStation 4 version at Sony’s media preview for the game, I can say the PlayStation 3 version looks a little dreadful, but then again the next-generation version of the game was supposed to have better environmental and lighting effects, so there’s that as well. Nonetheless, Ubisoft was nice enough to keep those of us with previous-generation hardware in their thoughts, until we decide to plop down cash for a next-generation console.

WATCH_DOGS (PS3)
THE VERDICT: GET IN

Watch_Dogs is an Ubisoft game for the PlayStation 3, as well as Xbox 360, Xbox One, PlayStation 4 and Windows PC. ctOS Mobile is available as a separate, optional, free download from the App Store or Google Play. Read our article about it here.