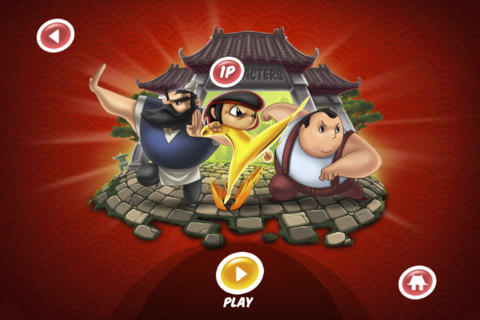 Waa Cha! is a casual single-player game for the iOS where players have to help their fighter kick damaging objects away.

It is, of course, not as easy as it sounds. Your fighter takes damage whenever he or she is hit, and has to replenish this lost health by not kicking away health kits! There are also bonuses in the form of glowing scrolls. All these booster items come towards you in the same fashion as the flying debris – that is to say, they are also tossed unceremoniously out from either side of your iPad screen. The less attentive of us inevitably end up flicking them away.

Waa Cha!‘s simple gameplay makes it easy to pick up, and is great for that bus ride that just won’t end. You’ll be able to play a timed session in Arcade mode, where gameplay is limited to just two minutes, or for until you run out of health in Survival mode. There is an Insane mode for the brave, where you have to flick in the opposite direction of where you want your character to kick. Devs Big Bunker Studios have mentioned on their App Store page that a Deathmatch mode is also incoming. Multiplayer, anyone?

As you play on in any of these three modes, you will also come across a variety of items. We spotted Big Bunker Studios’ own renditions of Justin Bieber, Pikachu, Spongebob, the Sunflower from Plants vs Zombies, and even the bastard lovechild of Sonic the Hedgehog and Felix the Cat.

What I felt could have been done better, however, was for the game to have included a storyline for the arcade mode. Waa Cha! is supposed to follow the journey of Master Wu Shou’s three apprentices as they train their skills in Kung Fu. While this is reflected during the character selection – you get to choose one of the three disciples – the plot doesn’t follow through in-game. Arcade mode ends after a measley round of two minutes, and there is no option to progress to the next level. Waa Cha! would have a better replayability if it had a story mode.

While the game is a finished product and was last updated at the start of September on the App Store, I do feel the lack of a story makes it incomplete. Big Bunker Studios have announced that they’re intending to add a Deathmatch mode, a leaderboard, as well as achievements, so hopefully they can look into adding a storyline soon.

Waa Cha! is developed for the iOS by Big Bunker Studios. It is available on the Apple App Store.