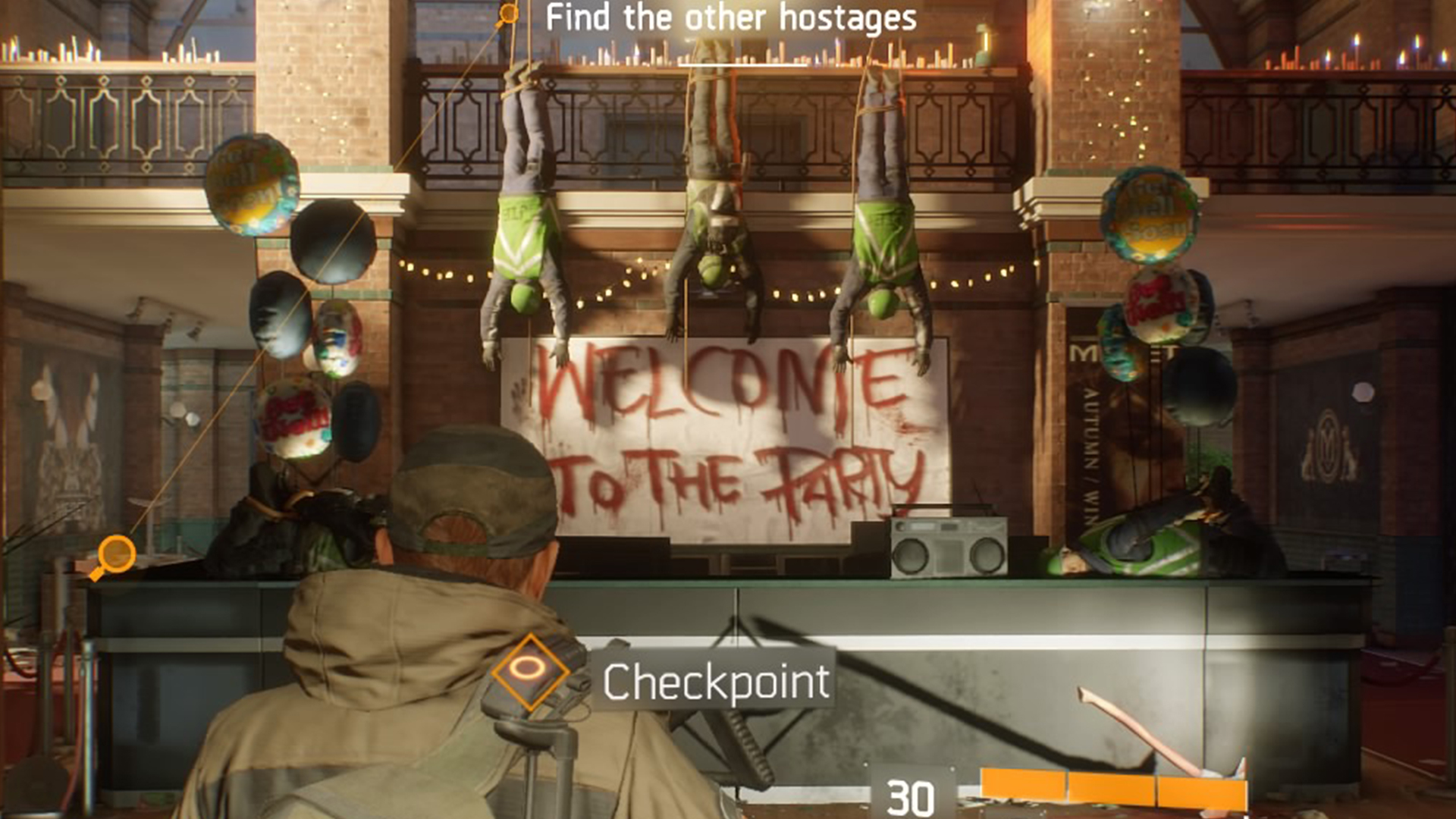 Persistent always-online games are never the same now than when they first released, a lifetime of updates continuously changing the player experience. Getting there requires strong foundations, and Tom Clancy’s The Division is busy building them. In some places it’s a rock-solid adventure, in others a precarious traipse across support beams. Thankfully, most of its problems only creep in during the end-game, a focal point for Ubisoft’s post-launch efforts.

To understand the inconsistency, we have to remember that The Division is a multi-studio effort. Massive Entertainment cooked up the concept, inviting Ubisoft Reflections to co-develop all of the gameplay systems. Red Storm Entertainment then hopped aboard to provide weapon designs, followed by Ubisoft Annecy who, presumably, helped with multiplayer.

Let’s get this out of the way: the weapons are great. Red Storm knocked it out of the park with their attention to modern firearms. Slapping on accessories never ceases to be satisfying, and I’m always spoiled by choice over which secondary weapon to bring – shotguns are every bit as useful (and fun!) as SMGs, light machine guns, or marksman rifles.

Granted, the game’s RPG trappings mean the gunplay is mainly about stats. To maintain some lethal authenticity, equipment upgrades come along briskly during campaign play, thus requiring only a handful of bullets to put most enemies down. There’s plenty of kick to the guns too, in terms of both recoil and player feedback.

The Division is also backed up with great tactical combat. It’s a polished third-person cover shooter with skills you can mix and match as desired. Importantly, the encounters that matter are engaging, constantly forcing my party to hide and relocate as much as possible thanks to hard-hitting bosses, flanking enemies, and the hail of grenades.

On the other hand, with the right skills and equipment it’s possible to run right in. Those moments are largely reserved for the non-essential fights and side quests, offering a nice contrast to the demanding main missions. Launching a sticky bomb into the middle of clueless mob always makes the repetition sting less.

Yes, The Division is repetitive. Don’t get me wrong, the game is an absolute blast with its story missions and various locales, although I’m just moving between zones and ticking off checkboxes. Most games can be boiled down to that but I honestly wasn’t expecting it to reach MMORPG levels of repetition.

So why the false expectations? Because The Division doesn’t share the same distinct signs that MMORPGs have. The game opens up like any other action-adventure shooter, and the lack of players out in the open world reinforces that perception. Here I am on this ride through an absorbing world the developers have crafted, pressed on by a story inciting urgency, and suddenly the illusion is broken by the need to rescue hostages by finding a key – for the fifth time.

I understand hostage rescues and supply recoveries are part and parcel of duty, but if I’m going to have to do the exact same thing in every zone then please, dress it up a little. Have me find a bolt cutter instead of a key, or make me restore power in the area first. The last thing I want in a city plunged into chaos is predictability. Not all side quests are bad. A few are actually compelling, depicting the height of the Black Friday epidemic. Due to the wonders of unexplained technology, players can conjure static holographic recreations at fixed spots. They remind of me of exhibits, snapshots of a moment made all the more powerful by audio. It is one thing to see a still image of panic or crime, but another thing entirely to hear the pleas, heartbreaks, and violence.

“Haunting” is what I used to describe The Division back in my preview and I’m glad to see that holds up for the full game. The forlorn streets of a ruined metropolis is mesmerizing, and picking my way through abandoned apartments, offices, and schools highlights just how devastating a modern biological disaster can be. And for all its bleakness, the game is beautiful to behold.

I just wish the developers took better advantage of the setting. Having no other players around (unless you’re in a party) helped greatly with the whole solemn introspective, but it gives Ubisoft less of an excuse as to why a car is still burning after several heavy snowstorms, or why an area is still relatively lawless after completing it – it’s as if they initially planned on having a shared open world.  The NPCs barely breathe life into the city either, mainly serving as backdrop pieces thanks to their binary responses. I mentioned how most of The Division’s problems lie end-game. Specifically, I’m addressing the mediocre crafting and troubled Dark Zone. The first feels like a token mechanic that doesn’t make much narrative sense, nor do the vendors, come to think of it – shouldn’t these government agents be adequately supplied? And while crafted gear tends to be better than the ones in basic shops, the random bonuses make them too much of a gamble at higher levels, especially when obtaining the rare materials for it seem to rely on random luck as well.

The Dark Zone is far trickier to sum up. Primarily, I take issue with the rogue system. Whenever a player deals a certain amount of damage to another, they “go rogue” and are flagged as such for a length of time. Ubisoft are tuning the rewards system to make the whole rogue jaunt worthwhile, but I still believe the distinction is unnecessary in the first place. Plainly marking someone out as a target would only spur the others to go on a manhunt, as it’s only natural to want to gang up for an easier kill. It also makes pulling the trigger first a lot harder, since all you’re doing is stacking odds against you.

What I do like about the Dark Zone, however, are the different NPC gangs that have carved territories for themselves. I can see that Ubisoft wanted players fighting over these bosses and their loot, but personally I’ve seen more strangers cooperating – the random drops just aren’t worth squabbling over most of the time.

If Ubisoft wanted to stick with the whole rogue concept then they should make players commit to a side. It may sound extreme, and does require loads of new content to serve the rogue faction, but it would tie in with one of the campaign’s narratives quite nicely. Having players choose a banner would also be a great fuel for an all-out war, making the Dark Zone truly live up to its name.

And yet, the Dark Zone is ever evolving. As of writing Ubisoft have released the Incursions update, with more certainly in the pipeline. Even as the future of the game hinges on this PvP battlefield, it would be remiss to dismiss the game entirely because of it. There’s a campaign filled with co-operative missions to tackle, an iconic modern city brought low to gawk at, and at its heart a vastly entertaining third-person shooter to enjoy.

Tom Clancy’s The Division is available now for PC, PlayStation 4, and Xbox One.