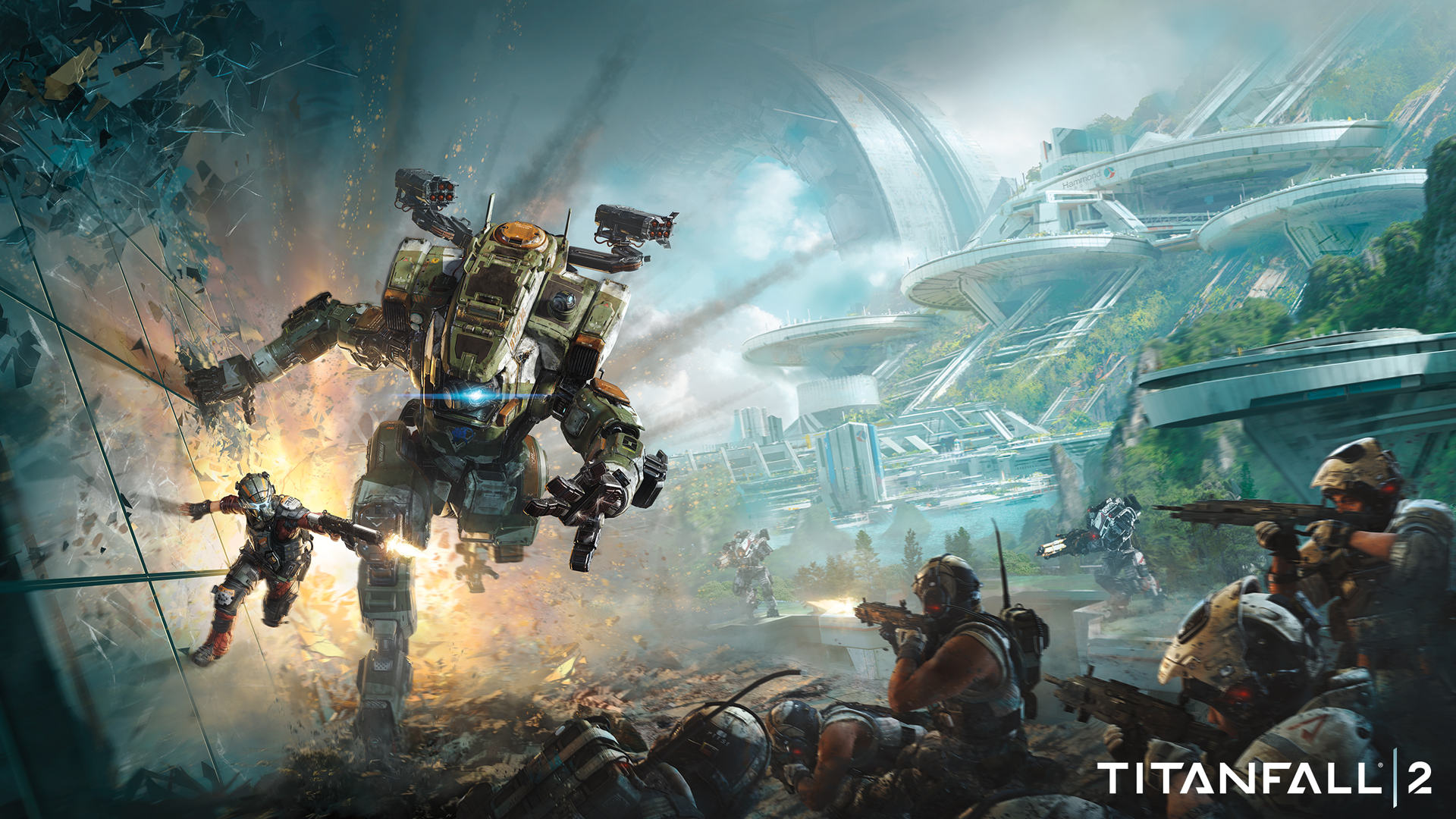 Wherever the first game fell short in capturing mass appeal, Titanfall 2 fixes. Some of these may have been steps backward for the genre but, as Respawn learned first-hand, multiplayer shooters live or die by their online community. And despite Electronic Arts throwing the game out to the wolves, wedged between industry titans Call of Duty and Battlefield, you’ll find plenty today who are willing to recommend this lightning-paced shootout to their friends.

It begins with the single-player campaign. Backpedalling from the multiplayer-only trend, Respawn has cobbled together a story I’d attribute to certain summer blockbusters – best enjoyed if you lean back, switch off, and go along for the ride. Opening with a power-fantasy cinematic to establish how badass Titan Pilots are, we’re quickly introduced to a mentor figure who may as well be carrying a cross on his back. The death flags are blindingly obvious in this one.

Militia rifleman Jack Cooper, our playable character, solemnly inherits the mission and BT-7274, our overpowered Vanguard-class Titan. Both Pilot-to-be and machine will forge a close bond as they trek through enemy territory below, on, and above ground. The writing can be ham-fisted and cheesy at times, such as BT remarking on our increasing combat rating, but it has its humor and moments.

I adore the mercenaries, these international crew of elite Pilots (and one maniac) who serve as boss encounters. Their unique personas and Titans leave a strong impression amidst the sea of mass-produced fodder, akin to Borderlands or a distilled Metal Gear Solid. The fights themselves don’t compare, of course, and are fairly easy, but they do a good job of introducing the different Titan models. As scripted as it is, what makes the Titanfall 2 campaign refreshing is Respawn’s reliance on pacing and level design. Obnoxious event triggers, such as waiting for AI companions to move or impenetrable doors to open, is more of an exception than the rule and generally go unnoticed. The shooting gallery segments are all fairly wide, giving me freedom of approach, and they neither outstay their welcome nor are they packed back-to-back. These levels often feature a different gimmick too, be it the map itself or acquiring a new tool or weapon. Nothing warmed my heart more than coming across a thermite launcher for BT.

The game gently shepherds me along, telling me when to get out of my Titan, how to navigate wall runs and jumps, or what weapon would be interesting to use. It has to in order to preserve that blockbuster experience and, frankly, is a welcome change of pace from the flood of open-world games. For a single deployment there are a ton of locales to tear through, from ruins to factories and moving ships, which leads me to talk about the one thing Respawn excels at: set-pieces.

Off-hand I know there’s been plenty of talk about a time-phasing level, and yes it is done spectacularly, but let me bring attention to a much later set-piece. After winding up in a rough situation, Cooper blazes through a facility in a fashion that elevates him from Pilot-to-be to certifiable badass, chaining wall-runs and distributing death with an iconic weapon from the first game.

This is the moment that opening cinematic was selling me, of being that unstoppable one-man soldier-ninja. This was the campaign’s crowning moment because it was proved that they succeded in making me emphatize with a Titan, no matter how artificial the means were.

And then the action escalates to anime-esque levels, which at that point is perfectly alright with me.

If there’s one gripe I have about the Titanfall 2 campaign it’s this: the lack of enemy Pilots on foot. I understand that Titans help to separate the game from that other franchise, and it’s great that we’re familiarized with the different variants, but being chased by equally-capable opponents would have made a great set-piece too, wouldn’t it? I guess that’s where the multiplayer comes in.

Titanfall 2 gets fast, more so on PC, thanks to some speed gathering mechanics that’s reminiscent of Tribes – you’re not a grunt, so the key to success is to be up in the air. Run along these buildings here, bunnyhop towards a tunnel there, and you can get some serious speed and map awareness going for you. Honestly, it can be jarring making the transition from the slower campaign.

This system was already in the first game, though. What makes it better now are the expansion of active player abilities such as the game-changing grappling hook and phase shifting.

They make up for the erratic nature of fighting in tight urban environments, so even if you do lose momentum or have to make a sudden change in path, the grappling hook will simply get you back in business. The same can be said of phase shift, which briefly lets you walk in an alternate dimension to escape enemy attention.

Think of these skills as the leading loadout factor, rather than weapons. In a Titan-dominated round I may want to use the phase-shifting ability instead, or lay down a shield barrier if I know a map has cramped corridors and window pot-shots. The weapons I choose to pair with these Tacticals, as they’re called, serve to complement the play style I’m aiming for.

Respawn hammered out some changes for Titans too. The mechs now loosely follow a frontline, sniper, or area control model so that players don’t just settle for that one Titan they like best. Okay, no, people still do that, but at least there’s a tactical incentive for them to swap around from time to time. As much as I love to use Scorch, a hulking short-ranged Titan that spurts out thermite and flammable gas, it’ll be mad of me to continue using him against a gaggle of sniping Northstars.

Where Pilot gameplay is the more traditional run-and-gun style of the “past” era, Titans lean closer to the current focus on class-based shooters. Each Titan’s Core ability is essentially an ultimate, and if players consciously play to their Titan buddies’ strengths, they can make for some devastating plays. A Scorch trapping an enemy for the melee-focused Ronin to go wild is truly a thing of beauty.

Now let me dampen the mood a little. I do have contentions with the game but they’re hardly game-breaking. Map familiarity is going to take far longer than you’re used to simply due to the sheer verticality of it all, combined with a generous smattering of dead ends both in- and outdoors. Without a solo or offline mode, players don’t actually get a chance to thoroughly explore the map without being a liability to the team. As for Titans, most maps get uncomfortably crowded fast; sometimes, detouring as a mech takes so long that flanking no longer becomes feasible.

Rather than innovate career progression, Respawn regressed by slapping unlocks on everything instead – weapons, mods, secondary skills, you name it. There’s an in-game credits system that lets you bypass these arbitrary locks, even after Regeneration (or Prestige Mode in Call of Duty), but the cost of these are still designed to be high to keep us grinding. Why limit the player’s available tools when unlocks can be tied to the cosmetics alone? Titanfall 2 has an excellent amount of cosmetic choices available and those in-game credits would have been better served there. Perhaps take a leaf from Blizzard and let us save our way to those store-exclusive Titan skins and animations.

Thankfully the weapons are balanced, so any player can perform well with the gear they start with. In fact, I still use the R-201 Carbine and the MGL anti-Titan weapon regularly.

Unfortunately, the biggest concern facing Titanfall 2 is its multiplayer numbers. On the bright side, I’ve done my best to squeeze in two-to-three matches daily and haven’t had any issues finding a match. However, that’s as long as I stuck to the “default” Attrition mode. During peak hours and weekends I may get into the new Bounty Hunt mode, the next community favourite and for good reason, but the less popular ones are going to keep me waiting.

Latency won’t present much of an issue thanks to the three Singapore data centers, unless you’re pushing 100 ping – at that level, you’re going to have to accept losing most head-on fights in a twitch reflexes game.

The combination of Pilot and Titan makes Titanfall 2 a compelling multiplayer shooter, one that provides engaging tactical options for players coming from either modern military or class-based camps. The story does nothing to interest me in the fight between the IMC and Frontier Militia, but it is well presented and one of the better FPS campaigns you’ll find in recent years. If nothing else, it leaves you feeling attached to the Titans you summon into battle.

And what a battle it is. Put in the time to learn the movement system, the abilities, the many strengths and weaknesses, and you’ll soon see why this game does compete with the other AAA shooters out there. I haven’t been this interested in the genre since the first two Modern Warfare games, or even the first Titanfall, and here I thought I was just getting old.

See you on the battlefield, Pilot.

Titanfall 2 is developed by Respawn Entertainment and published by Electronic Arts. Available now for PC, PlayStation 4 and Xbox One. A copy was provided for review.

Ade thinks there's nothing quite like a good game and a snug headcrab. He grew up with HIDEO KOJIMA's Metal Gear Solid, lives for RPGs, and is waiting for light guns to make their comeback.
Previous post Microsoft Xbox One S Review – Worth The Wait?
Next post New Gen 2 ‘baby’ Pokemons available for Pokemon Go now