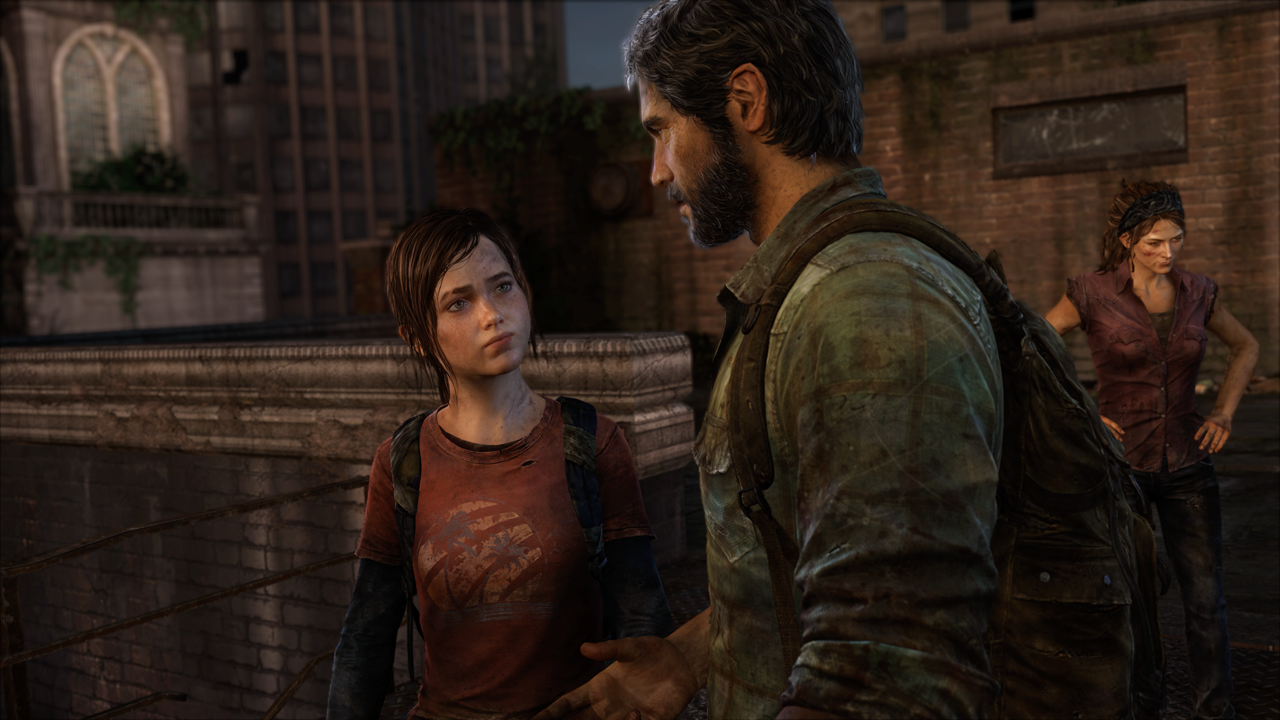 So, it seems the formula for Game of the Year this year appears to be an action-adventure game with a young girl following the antics of an older gentlemen.

Such is the case in The Last of Us, which follows the story of Joel, a smuggler-for-hire in the city of Boston, now under martial law, after a mutated fungal infection outbreak hits North America, and Ellie, a spunky 14-year-old girl born in military-controlled captivity who represents the hope of humanity, as always is the case in games like these.

Putting you in a sombre mood while having a hand at the controls, you watch the madness begin as humanity goes kaput. Twenty years later, it’s all about your survival and nothing else, putting your butt on the line with a handful of ration coupons for bribes, Joel puts it all behind and lives a second life as a smuggler, traversing the city using secret tunnels in abandoned buildings with your ruthless friend Tess.

With more of the game’s basics explained to you in the earlier objectives, you’ll soon get used to that this game is all about, leaving you with the choice of playing it rough or being sneaky with stealth. You’ll soon find that the man you’re tracking down who made off with your weapons cache sold said weapons to the Fireflies rebellion, a member of whom you’ll meet and that’s where you’ll be introduced to your new things to smuggle out of the city to meet up with the Fireflies themselves: Ellie. And that’s where our little story begins.

After a scuffle with the military on your way out, you’ll soon make yourself part of the wanted list by the military, who seek to hunt you down. Of course, beyond the city walls lie the infected who breathed a little too much mutated cordyceps spores in the form of the vicious but blind Clickers and the Runners, who are less blind but just as vicious if you’re not careful.

You’ll explore the world beyond the safety of martial law and move around Uncharted-style amongst the debris and fallen structures of city ruins devastated by air strikes in the futile attempt to wipe out the infected or evacuated towns who dropped everything and left everything behind. You are left with several routes to take as you go in the mostly open world, but gameplay is largely linear, ending yourself in the spots the game wants you to be.

There is beauty in this post-apocalyptic world, however. The Last of Us triumphs in creating a world overrun not only by the infected, but also nature. Without human intervention, plants and greenery take over the cracks on the ground and the walls of the empty buildings, with wildlife prancing all about like a National Geographic documentary.

Aside from nature, bottles, health bars and a host of other useful items litter the world around Joel. A part of your survival is Joel’s ability to craft items using everyday objects such as rags, alcohol and blades. Combining a rag and some alcohol, for example, makes quick work of a bunch go infected in your way, although the very same materials are used to make your health kits, so it’s all down to prioritising your resources.

Of course, you never meet the Fireflies like you planned early on, forcing you and Ellie to make the whole way some place where what little remain of the rebellion eastward of the once United States. Naughty Dog wants their little game to last meticulous players over 40 hours, filling it with puzzles like figuring out how to float a non-buoyant Ellie across deep waters or finding your way around a dark hotel basement.

So travelling further on in the game is where you’ll meet the uninfected survivors, who may as well be banding with the infected in their attempt to take you out. The Hunters bring out the genuine prowess of the game’s AI. They show suspicion, aggression and fear, depending on your actions around the environment. Keep quiet, and they may not notice you, but make them see one of their comrades you shivved and alarm bells go off, forcing them to look around and start searching for you. Cause more commotion in an attempt to silent eyewitnesses and more minions from the lower floor may scramble to your last known position.

It is forgivable, then, should you choose to make a run for it far away from a swarm of armed men, which I found doing on a few occasions to save on needless ammunition expenditure at a gamble of being shot several times before making for the exit. And that’s how the game let’s you pick your way to play, although there are other objectives mandatory for story progression. You will face mini-bosses in the form of the heavily mutated Bloaters which put you, your resources and your evasiveness to the test, but mostly you’ll be figuring out how to take out a big group of Hunters without being spotted.

Through the events of the game, you as a player will see Joel’s world through Ellie’s eyes. The bond between the “doing-it-for-the-money” Joel and the butt-kicking Ellie brings allusions to another blockbuster game that appeared in the start of the year, but right here, Ellie is so much more than just an assistant who tosses you stuff, she can hold her own, eventually to the point where you relent and hand Ellie a weapon, despite her naiveté towards seeing the real world for the first time. She will provide what would mostly be a silent game with anecdotes of her past, adding life to the game by waiting like a child that’s told to, humming along or talking to animals, providing her with character that players can relate to as a teen taking the apocalypse all in.

Despite being a beautiful, processor-heavy game, The Last of Us is not without its quirks. Due to its programming, the AI Infected and Hunters seem to have no problem with noticing the girl out in the open or having her talking too darn loud, only arousing their suspicion when you yourself are spotted or heard, which shatters the feel of true stealth in this game. The other issue perhaps is the unhelpful way you are left unable to backtrack and the game auto-saves you at a point of no return. But players of Uncharted will recognise the way the game brings you back to the action as quickly as you died a couple seconds ago, although saving often if you feel you can make a mistake is always a good idea.

Unfortunately, being one of the meticulous players, I could’t reach a substantial conclusion by the time I had to wrap up my review, but that means I can’t put you on the edge on what to expect at the end, either. The Last of Us remains the game to have for stealth-loving PlayStation 3 fans before we make the leap to the next incarnation of the PlayStation console.

THE LAST OF US (PS3)
THE VERDICT: BUY IT

The Last of Us is a Naughty Dog game for Sony Computer Entertainment exclusively for the PlayStation 3.