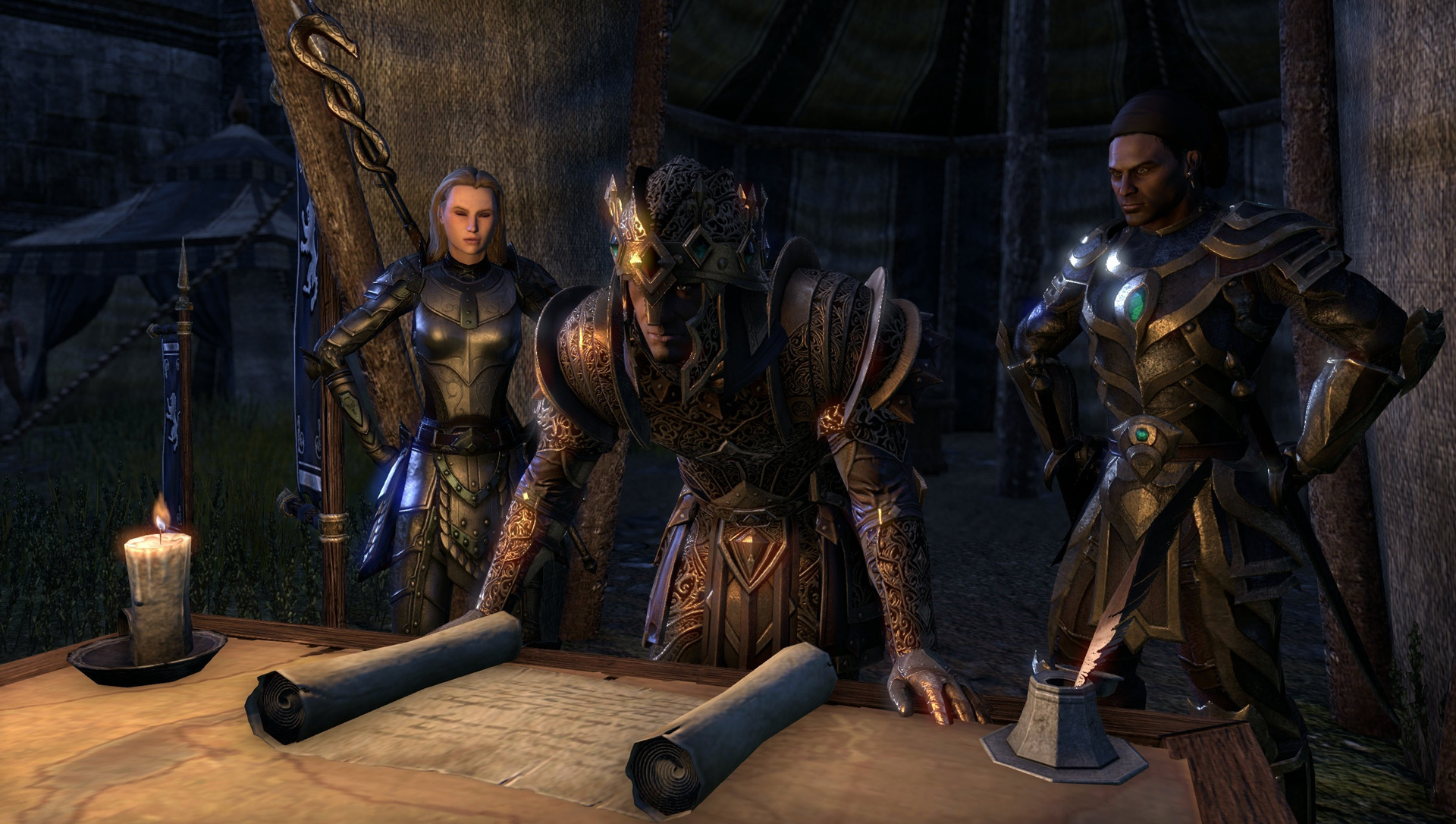 It’s an idea we’ve all considered: exploring the vast lands of Tamriel with a friend or two by our side, looting Dwemer ruins, plucking Nirnroots and fighting mudcrabs. Though valiant in their efforts the modders never came close, leaving this monumental dream to newly-minted studio ZeniMax Online. Now here they are with The Elder Scrolls Online – megaserver, party quests, PvP and all.

Is it any good, though? The answer largely depends on what you’re looking for, as this game isn’t exactly clear on what it wants to be. As an Elder Scrolls fan I find the experience more trouble than it’s worth, reinforcing the urge to go back to my single-player havens instead. The experience is far better after constant self-reminders that this is an MMO, and even then I needed the aid of mods to sort things out.

One of my main sources of frustration with The Elder Scrolls Online is in its execution. We’re treated to the same first- and third-person views we know and love, only to be jarred out of our reverie by the realities of latency and MMO-designed combat. Those discrepancies made everything feel off – hence my need for the reminders – and it’s a feeling that never goes away.

My solution was to make it look less like The Elder Scrolls and more like an MMO. Keep the camera zoomed out, have floating damage numbers, install a multi-quest tracker; so much so that visits to Nexus Mods became daily routine (a hearty recommendation for Foundry Tactical Combat). I admit it’s considerably meta as half the fun of the franchise is in modding, but this occasion was mostly necessity rather than fun.

With that out of the way I had to come to grips with the restrictive gameplay. I lamented the absent stealth system, for Nightblades operate more like damage-vomiting rogues than sneaky assassins. Melee combat isn’t too entertaining or effective without a shield, and ranged combat’s lock-on system feel outdated. That leaves the magic-wielding Sorcerer, a class I ultimately settled for.

It’s restrictive in the sense that choosing a class means getting locked into certain play styles, making freeform choices an unviable decision for group content. That is, of course, on top of the Alliance restrictions already levelled against us. If you love being a Khajit (Aldmeri Dominion) but your friend wants to be a Nord (Ebonheart Pact) then tough luck – either make a second choice or pay more to get the exclusive, Alliance-free Imperial race.

So all that’s done with, things are chugging along and we get our first quest to defeat a named character post-tutorial. Splendid! Time to see how hard we get our asses kicked, except this time we didn’t. In fact it was the boss who was already lying face down in the dirt, surrounded by a mob of players waiting to beat him into oblivion in a moment. These non-instanced areas are the most disappointing of all, killing all notion of risky adventure and leaving only mere checkpoints for that to-do list.

To give credit where it’s due, The Elder Scrolls Online lives up to its promise on lore. There’s plenty of content to immerse in, be it books (remember some of them give free experience!), quests or the various locations. Pay attention and chances are it’ll elicit a few chuckles out of you.

I’m not fond of the main story as they went with the horrible mistake of involving prophecies and thwarting daedric princes. Yes, its series tradition that the scrolls foretell these things, but when every other player also happens to be the Soulless One you can’t help but wonder whether this is an impressive mystical scam or a very desperate prophet.

There’s also the secondary story revolving around the three-way player-versus-player Alliance War for the Ruby Throne in Cyrodill, which is where the future of this game probably lies. Fighting for the Emperor’s crown and all the benefits that come with it? ZeniMax Online, double down on this!

The Alliance War is conducted via campaigns of territorial control, rewarding the faction that manages to capture all six keeps surrounding the Imperial City. It involves siege weapons and various others ways for players to contribute, making this the lifeblood of the game at the moment. You can participate upon hitting Level 10 but I’d recommend considering it late-game content.

I’m conscious of the fact that concessions were needed for developing an MMO, to which I counter: Did we really need to chase this model in the first place? What we ended up with is something that does neither “The Elder Scrolls” nor “MMO” particularly well, and I can’t help but wonder if a co-op affair in the style of Borderlands would have fared better. Granted I’ve barely scratched end-game content but if the journey is tedious then clearly something is wrong. As of now there’s little on offer here that compels me to stay.

With it being such an awkward union of genres I conclude this as a matter of personal taste. If you lean towards PvP and need something different than Guild Wars 2 then sure, give it a shot. It’s a hard sell for anyone else thanks to ZeniMax Online shooting themselves in the foot: new users need to buy the game and an additional one-month subscription, making this an absurdly high up-front payment.

So long and thanks for all the Skyshards. I think I’ll go back to putting baskets over people’s heads and stealing their clothes instead.

THE ELDER SCROLLS ONLINE (PC)
THE VERDICT: CONSIDER IT

The Elder Scrolls Online is an MMORPG developed by ZeniMax Online Studios and published by Bethesda Softworks for Windows PC and Mac, available now. A monthly subscription fee applies.

Ade thinks there's nothing quite like a good game and a snug headcrab. He grew up with HIDEO KOJIMA's Metal Gear Solid, lives for RPGs, and is waiting for light guns to make their comeback.
Previous post Zynga Loses 25 Million Players In A Year
Next post Steam Removes $19.99 Game From Early Access