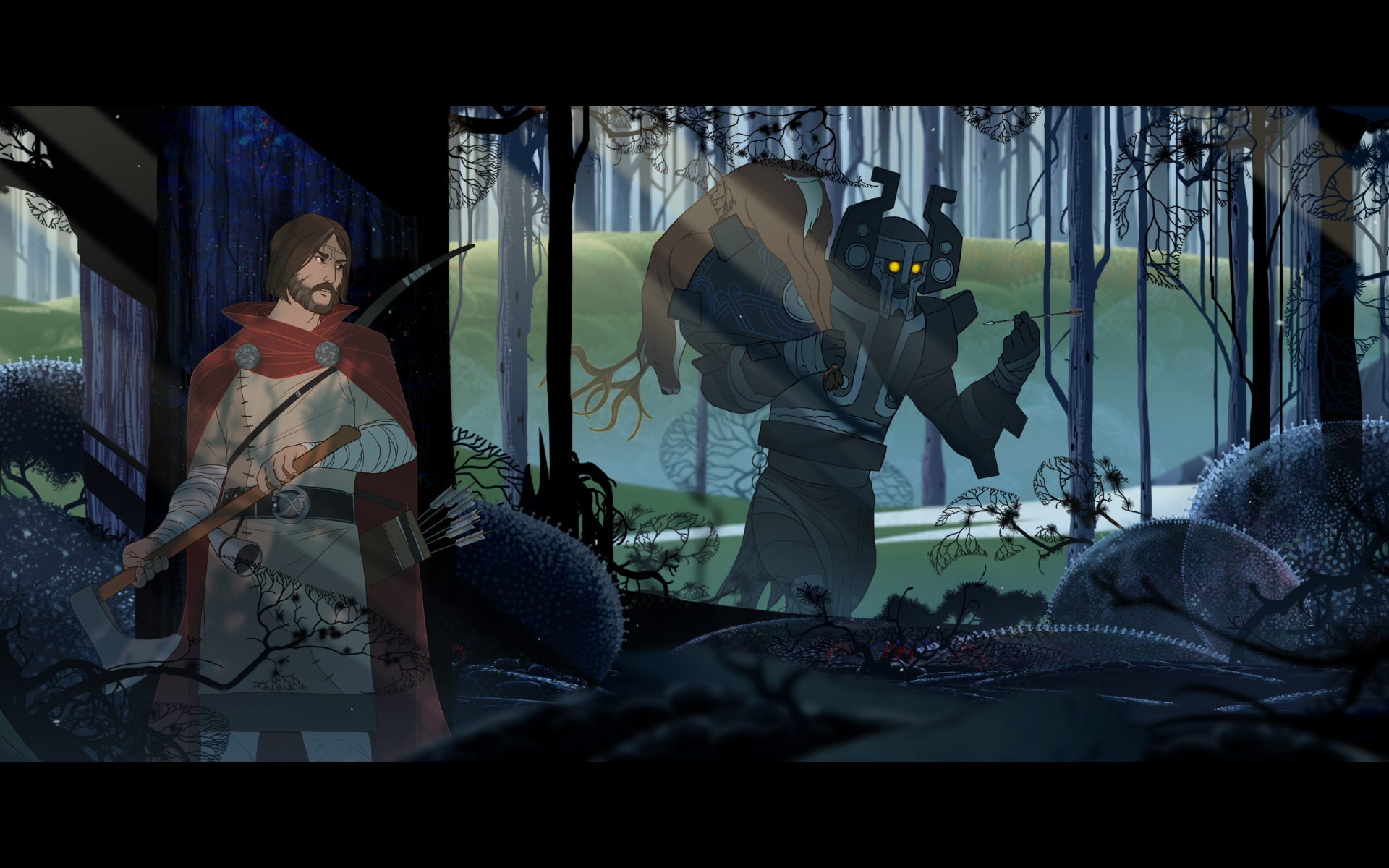 You trudge through the snow and ice with a hundred fighters and hundreds more innocent villagers across the harsh landscape lit by a sun that no longer sets. Shadows on the horizon draw ever closer. Your caravan’s spirits are weak. Yet you choose to defend yourselves against the dredge, who clearly outnumber you. You hope for the best.

Such jabs at your leadership skills are all part of playing The Banner Saga, a turn-based tactics game. A large part of the game has you travelling across the landscape as it rolls out “Oregon Trail”-like spot decision-making that will affect the number of folks who remain in your ever-moving caravan and change the way your game will be played out.

The game screams out loud the risks of your decision-making. Perhaps someone has gotten drunk and jostling the caravan of poor morale, perhaps some random strangers from a campfire wants to join your caravan, only to run with some of your supplies. Choices range from simple conversation topics to tougher decisions before a battle takes place, which affects the characters you are with. A few of which won’t live to see the end of your long, arduous adventure.

You play the story out through the eyes of many individuals from the story, that takes place in the bitter cold of a Viking world. Some characters are human, while others are Varl, giants amongst these humans who fight by their side. But again, it is perhaps not too wise to grow too attached to any of your characters.

When not going on for days on end through the land, The Banner Saga’s other side to gameplay is turn-based tactics through battles. You can run all you like, but the dredge will always be nibbling at your feet. Battles are laid out across a grid. Humans take up a square, while the bulkier Varl giants take up four, which can mean that they cannot squeeze between two units just one space apart, thus forcing you to always be on your toes when making your next move.

Fights are pretty straightforward. All units possess strength and armour. Whittle their armour to leave enemy units more vulnerable to future strikes. Empty their strength and they stand no more. Naturally, knowing how to fight well is just not that simple. Player characters and enemies move in an alternating fashion, ensuring your turn is always next even when grossly outnumbered, but you’re gonna need some sheer will to pull it off.

“Sheer will” is indeed what the game offers you. How good your caravan is feeling will affect how much your player character will want to go the extra length to deal a more devastating blow through the use of Willpower. The use of Willpower can make the difference between having the enemy live for another beating or no longer pose a problem to the ailing unit he is about to defeat.

Kill enemies and you earn renown, which serves as points utilised for upgrading your characters as well as currency used to top up supplies for your caravan or obtain stat-boosting items you use in battle. Do you spend what little you have for food for your caravan, or treat your favourite character with an equippable item using what little your have and starve the hungry?

As you carry on with your journey, you tend to lay back during the uneventful moments, as if the game does that to make you take in all the magnificent hand-drawn characters and backgrounds. The game did take me on a higher level of impression when the early sequences had voice-overs, only to find that voice-less storytelling fills up most of the conversations in the game. Nonetheless, the game still demands your awe in terms of its aesthetical beauty.

Unfortunately, the game doesn’t do a whole lot to change things besides those of your characters and enemies. Your battle always plays out in a similar grid with no niches or terrain differences to offer up any advantage in play. There is also no way to save your journey as you please, usually making your poor choices stick if you don’t feel like going back and starting over. This is, of course, not a complaint being part of the game, which therefore calls you back to roll out another adventure in a different direction.

The Banner Saga is as beautiful as the choices you make can turn ugly. It keeps you on edge whether you want to stay timid or go all out with fists flailing. This is the first game in a planned trilogy, and those of you who do see this game through will want to return for more.

The Banner Saga is a game by Stoic for Windows PC and Mac OS X.