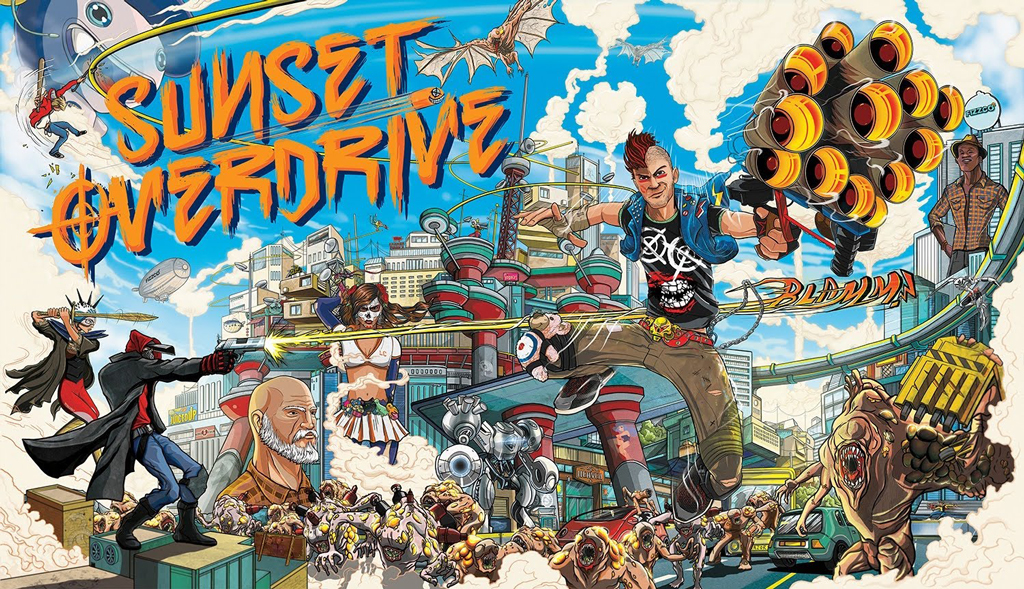 Video game creators and marketers like their buzzwords. Today, one of the terms people like to talk about when promoting their new game is “traversal” – namely, the ways in which a player can move around the virtual world. Many games have put a lot of effort into making traversal enjoyable, and some make it the central mechanic of the game.

Insomniac Games’ Sunset Overdrive, Microsoft’s unusual candidate for an Xbox One exclusive, does amazing things with traversal. While it is ostensibly an over-the-shoulder shooter, giving the player the task of shooting an endless horde of grotesque mutants with a wide range of bizarre firearms, the core of what makes it fun is a city built with the game’s movement systems in mind.

The nameless hero of Sunset Overdrive can “grind” like a skateboarder along ledges, railings, power lines and everything else that looks grindable. He (or She, depending on your gender preference) can also bounce off almost every other object, including cars, cafe umbrellas, bushes and awnings. The immediate temptation is to try to never touch the ground, turning the entirety of Sunset City into a fast-moving game of The Floor Is Lava.

If this sounds a bit silly, well, it is. Sunset Overdrive is an unashamedly ridiculous game. There are guns that fire vinyl LPs, exploding teddy bears and flaming bowling balls, which can be augmented with power-ups called “amps” that can add extra fire, ice or electricity, or completely silly powers such as a voiceover that tells the player how awesome they are. At the centre of this action is a wonderfully (as mentioned above) customisable hero, who can be male or female at the player’s discretion and sport a wide variety of hairstyles and bizarre fashions. The clothing is particularly diverse, allowing multiple layers of weird, brightly-coloured items. Nothing is gender-locked either – female characters can wear a magnificent beard if they wish and male characters can slip into miniskirts. It all adds to the game’s contagious sense of chaotic fun.

The story involves an apocalypse (dubbed by the game an “awesome-apocalypse”) triggered by a mega-wealthy soft drink company launching a new energy drink before it has been adequately tested. It turns out that just one can of the stuff will transform a human into a grotesque, tumour-covered mutant. This bright orange soft drink, called Overcharge, sets the visual tone for the entire game. Far from the gloomy browns and greys of most big-budget action games, Sunset Overdrive is relentlessly colourful and cheerful. Even the mutants, dubbed ODs, explode into bright orange splatters when they die.

The game’s humour never lets up. Some of it feels forced, with the game perhaps trying a little too hard to be zany and random, but more often than not the gags work, and most players will laugh out loud at least a few times. It also breaks the fourth wall frequently, with several characters making it obvious they know they are in a game, and even interacting with the game’s interface. One memorable moment sees the hero stealing the energy gauge from the top of the screen and stabbing a boss through the head with it.

Despite its bright colours and motion, this game can also be unsurprisingly extreme with its violence and to a certain extent, gore. Though in an inoffensively over the top way that is impossible to take seriously.

Sunset Overdrive is a huge amount of fun, but it is hampered by a few design issues. Missions and side quests can get repetitive, especially for those that require players to do fetch-and-collect or kill-enemies-in-a-zone types. The game also requires a fair bit of time to master and get the hang of the fast-paced traversal system. The system is a prime example of the “easier to learn, hard to master” adage. That said, any game in which players will choose not to use the fast travel system because of how much fun it is to get around the very large map manually has clearly done something right.

Sunset Overdrive does not succeed at everything it attempts to do, but it so bravely laughs in the face of everything that a commercially successful game is supposed to be that one has to admire its chutzpah. It is colourful, rude and irrepressibly silly, but also tightly designed and endlessly fun. For anyone who own an Xbox One, Sunset Overdrive is a must-buy.

Sunset Overdrive is an action game developed by Insomniac Games and is an Xbox One exclusive. A digital copy of the game was provided to us for review.

Aaron Yip is an industry veteran with more than 15 years of experience. When not spending time on his gaming PC and consoles, he can be found in Hyrule solving ungodly puzzles and collecting gems.
Previous post World of Warships Developers' Diary: Aircraft Carrier
Next post Singapore’s Own Big Hero 6 Game Brings Action to Match-3