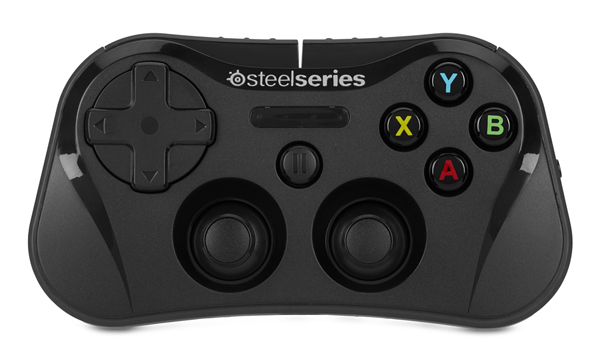 Made-for-iPods (or commonly known as MFi) controllers really have the ability to be a game changer for iOS devices. But they’re still in their infancy, and not one of the main drawback is that there still isn’t a lot of games supported (relatively speaking to the thousands of games on the App Store). We have reviewed the Logitech Powershell, which didn’t impress us all that much to be honest.

So it was with some cautious optimism when SteelSeries passed us their Stratus control pad for iOS for a review.

The controller has an extremely simplistic look and feel that should be familiar to anyone who has touched a Dualshock controller before. It has all of the essentials, including a d-pad, two analog sticks, a pause button, four triggers and four face buttons. Since it’s Bluetooth based it has a convenient on and off switch on the side, and comes with a charging cable (sadly, it can’t be used while charging, which is a bummer). In terms of battery life the Stratus lasted us quite a while (hours upon hours), and the simplistic LED lights on the face show you how much juice it has left.

You should note, though, that this controller is tiny. So tiny, in fact, that our hands cramped up after prolonged gaming time with it. The face buttons feel perfect, and are just sensitive enough to ease into without accidentally triggering them. The same goes for the pause button, which is far enough away where you won’t hit it automatically.

The d-pad is pretty much on-point and precise, and doesn’t have a “sticky” feeling to it, although we wouldn’t place it on the same pedestal as a Dualshock or an Xbox game pad. While the L1 and R1 buttons work perfectly, the L2 and R2 are strangely shaped, and are actually pretty small. Everything else works great though, and even though our thumbs were pretty close together with the two analog sticks we still didn’t have too much trouble.

Our tests with nearly every game we tried it with came out positive, mostly because of the addition of the two analog sticks. If a game didn’t support either option, we could easily just switch between the directional inputs, and the face buttons work like a charm. We have no real complaints with the d-pad or sticks throughout my sessions, and the only minor problem we ran into was constantly “finding” R2 to accelerate in Grand Theft Auto: San Andreas. It’s far from unplayable, though. 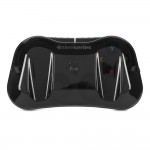 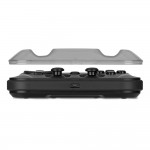 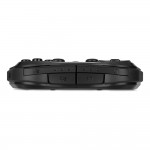 So what really sets the Stratus apart from its competitors, notably the Logitech Powershell? Wireless support. Simply put, the ability to go wireless and play via Bluetooth allows for the use of the Stratus on older model iPhones, iPods, and of course, iPads. The Powershell, if you haven’t already notice, is only compatible with the iPhone 5/5S. Bluetooth syncing could be better though, since the only indicator you have of a successful sync process are the cheap LED lights, and sometimes it can get pretty ambiguous. The other drawback here is that you will need to find some sort of support for your iPhones or iPads while you game, because for the same reason that the Stratus doesn’t cradle them.

But the minor inconvenience of sync ambiguity is far outweighed by the ability to play on any device, and it also frees up the lightning port for the Lighting Digital AV Adapter for HDMI based Airplay on your TV, or any other accessory you might plug in there. As an added bonus, multiple controllers inherently support multiplayer sessions like any console would. Sure, it isn’t going to function as a backup battery for your phone like the Powershell, but since most people are probably going to buy a controller to control things, we don’t see that being a problem.

SteelSeries really knocked it out of the park with this one with a solid controller that opens up more play control options. There’s just big gripe – the S$129 pricepoint on Apple Store. I’m sure SteelSeries was just running with the pack and not overextending on this one, pricing themselves against the other two competitors, but with the limited library on iOS, it’s still a tough sell. Having said that, iOS controller support is getting stronger every day, and eventually, you may want a wireless option and the Stratus would be a good bet whenever that day comes.

Aaron Yip is an industry veteran with more than 15 years of experience. When not spending time on his gaming PC and consoles, he can be found in Hyrule solving ungodly puzzles and collecting gems.
Previous post XCOM: Enemy Within Invades iOS and Android
Next post Mac Owners Can Get Their RPG Fix with Divinity: Original Sin