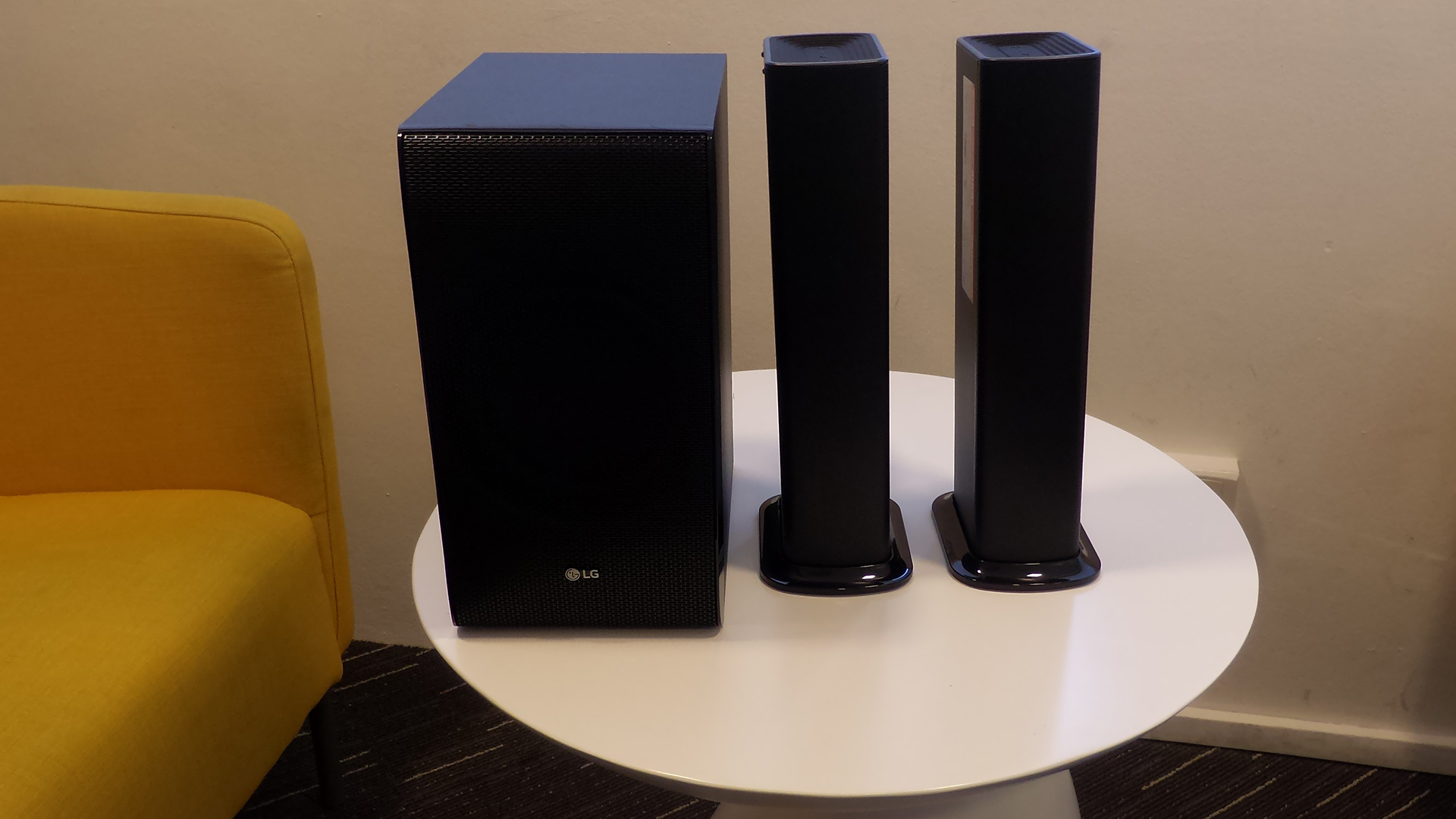 They may call it a sound bar but the LG SJ7 Sound Bar Flex is capable of so much more. Speaking to the company’s knack for the fun and unusual, this wireless speaker system easily morphs into a traditional 2.1 or a 4.1 surround with barely a hint of effort, making it one of the most versatile set-ups available for apartments. It’s somewhat large footprint may be a poor fit for living rooms, especially when paired with today’s sleek TVs, but lead this bad boy into the bedroom and you’ll find plenty that impresses.

The “secret” behind the SJ7’s flexibility are its two 60W speakers, both of which can be arranged in one of three ways: together and on their sides to mimic a sound bar, standing and off to the sides as with a typical speaker set-up, or with the speakers laid out to the front and rear of the listener. Rather than having it be a case of set-up-and-forget, users are encouraged to switch things up according to their needs. That may sound like a chore to deal with but LG has designed it such that the process is as painless as possible.

Most of it is thanks to the secondary speaker being completely wireless, even foregoing a power cable to run on internal batteries (though you may not always want to). I simply have to reposition, slide a switch, and I’m ready to go. I could even tote the secondary speaker to the kitchen as its own independent unit, not that I would want to – the physical size and battery life don’t quite turn it into a modern-day boombox. 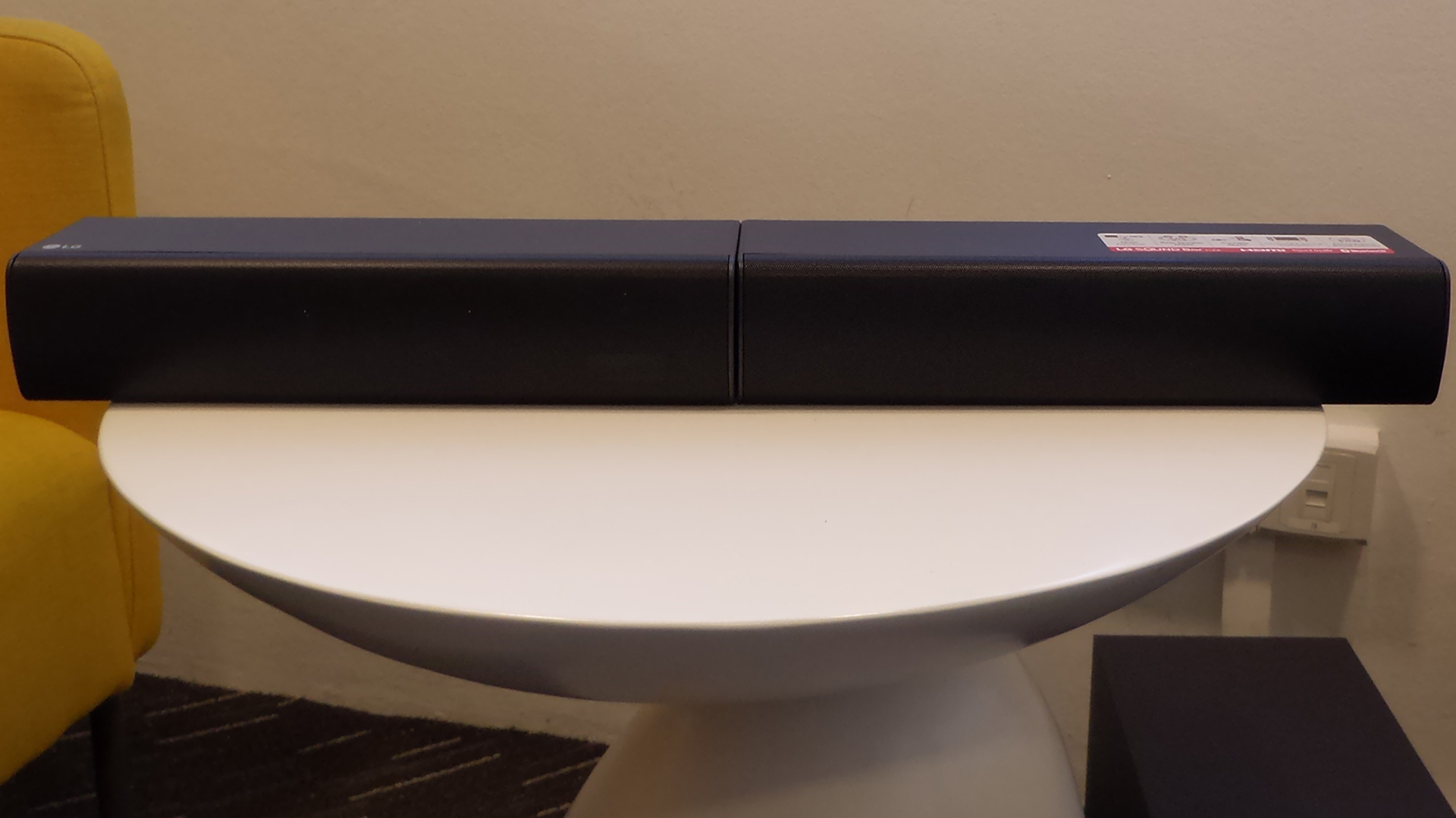 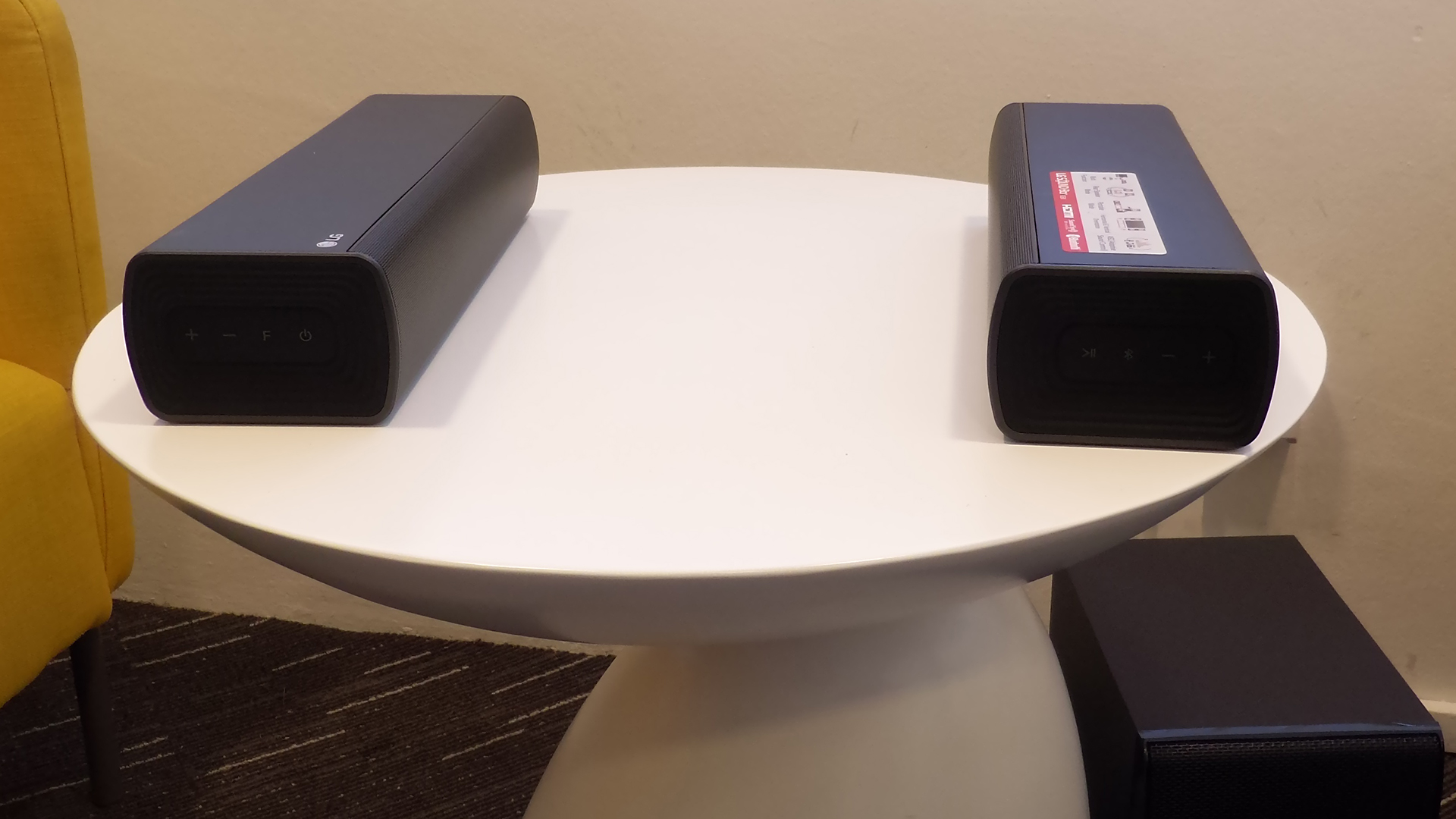 Naturally, the big question here is “why” — why bother with these alternate configurations over a regular sound bar?  My takeaway is to view the matter as you would equalization, to mold the sound in a way that suits a particular genre or taste. In this case, it’s molding the sound to fit different experiences.

In its sound Bar configuration, the Flex is in its least intrusive form, making it ideal for TV shows and day-to-day use; let’s be honest, nobody wants to shift a speaker around every single time, no matter how light or easy it is. With music, however, standing the speakers in a more traditional manner helps. I won’t claim it has better stereo imaging or clarity (that still boils down to the speaker’s construction) but I will say there was a perceivable difference, one that made listening to Spotify or watching concerts a touch more enjoyable.

The Sound Bar Flex’s greatest appeal lies with its third and final form, emulating a 4.1-channel set-up for that surround experience beloved by movies and games. It doesn’t compare to a system with separate, carefully positioned satellites but it sure as hell comes close, with all the convenience that a wireless speaker brings. I loved getting ready for movie nights, as the “rear” unit could be propped up before the opening credits even began rolling. Synchronization was always a breeze (I’ve never had to think about it beyond the initial set-up, which was itself completed in a flash) and the provided remote control meant I didn’t even have to fiddle with the physical buttons on the speakers. The entire system had the power to deliver, too, easily filling up a modest living room. 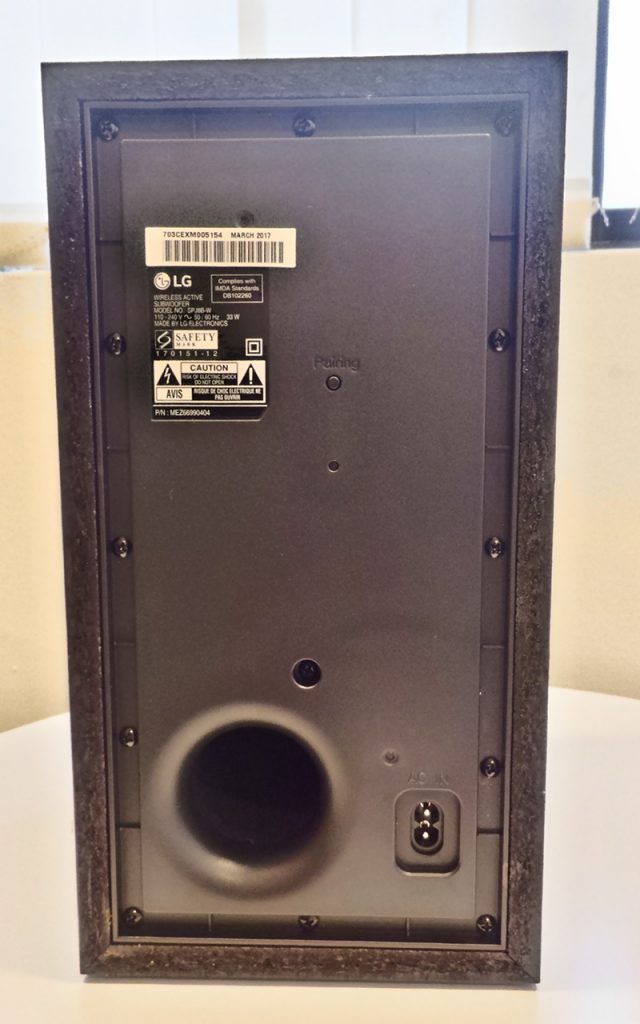 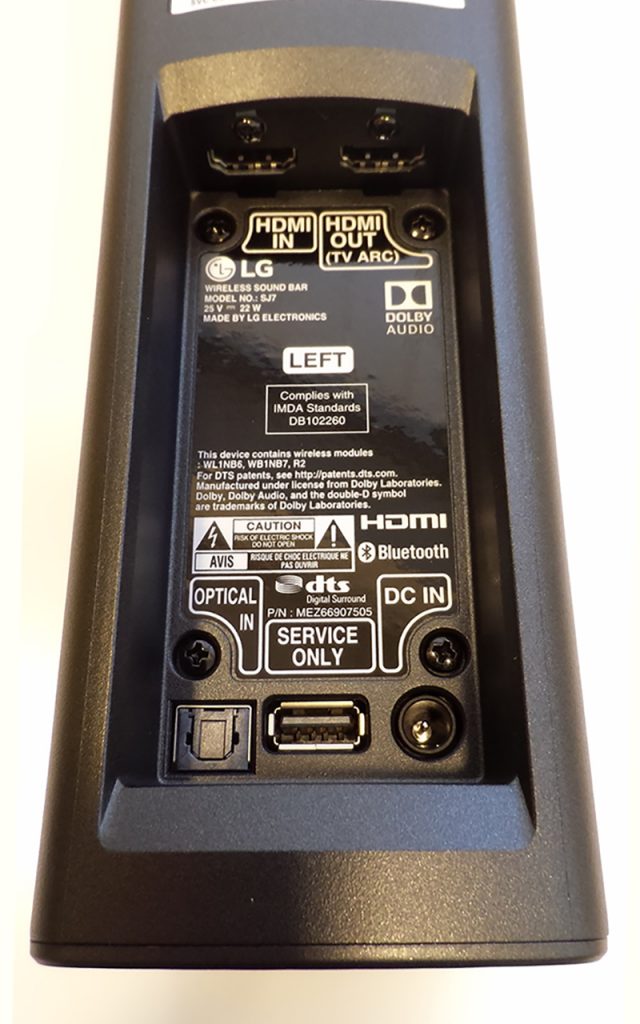 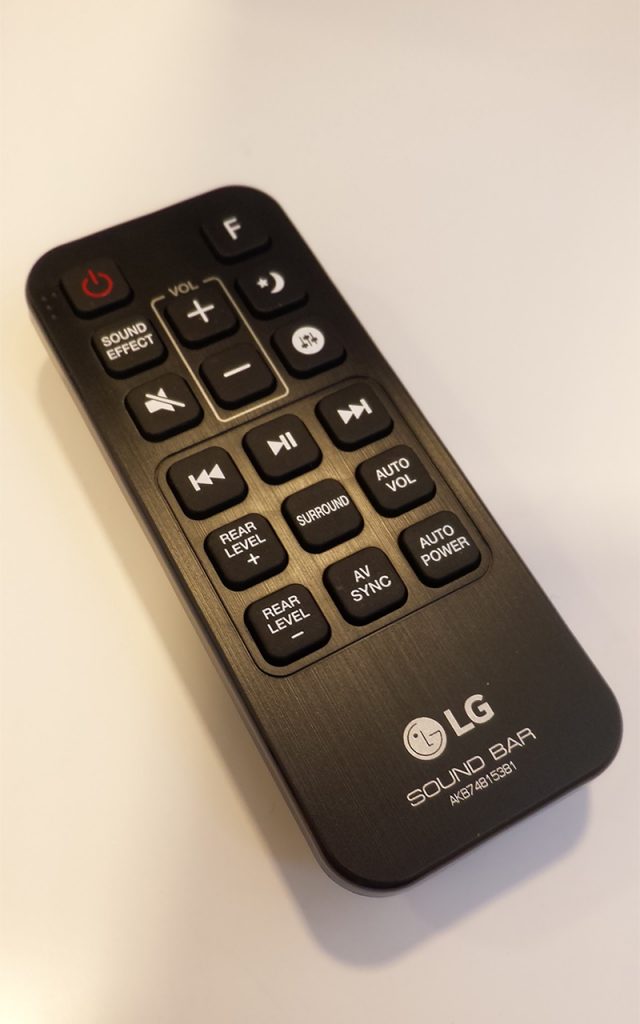 Working in concert with the two speakers is the heavy, 200W front-firing subwoofer. LG has made a point to keep this connection wireless too, which is great for anyone averse to cable clutter. A secondary plus is that it makes positional testing less of a hassle. It performs well, as long as you limit the action to daytime – the subwoofer doesn’t have a dedicated gain dial, which makes late-night listening tough without upsetting others.

Since we’re bringing up caveats, let’s talk about the secondary speaker’s battery. LG states an uptime of about 4 hours, which I’ve managed to come close to twice. That’s perfect for movie nights but less so for gaming, which is probably when you’ll want to plug the three-pin power cord in. More pressing is the discovery that leaving the speaker plugged in more than doubles its power output – from 140W to 320W, according to the official specifications.

That’s definitely something to consider when placing the Sound Bar Flex in a larger living room, where it needs the extra power to perform. If you’re going to have to hide a power cable then it kind of renders the whole wireless advantage moot, in my opinion. Should you want to leave them in a fixed position more often, however, then the speakers do come equipped with small mounting holes.

Either way, the SJ7 Sound Bar Flex still manages to handle its most important task: providing great audio. While there are sound bar and home theater alternatives that do better at their given roles, it’s easy to admire what this system is able to accomplish. While I’ll still reach for a good pair of headphones or near-field monitors for music, these speakers are a solid pick when loading up movies and games. Rewatching the naval battles in Master & Commander: The Far Side of The World was, as expected, an absolute thrill. Similarly, the speakers handled the varied and soul-warming beats of Persona 5‘s soundtrack notably well, without imparting too much color. There’s plenty to be said about how subwoofers bring entertainment audio to life, and the same can be said for surround.

All things considered, this is a fun introduction to the realm of home audio. What the Sound Bar Flex offers is the freedom to explore and discover your own audio-listening preferences and habits within the context of your own home, and that’s something no test session in a treated demo room will be able to tell you.

Ade thinks there's nothing quite like a good game and a snug headcrab. He grew up with HIDEO KOJIMA's Metal Gear Solid, lives for RPGs, and is waiting for light guns to make their comeback.
Previous post ROG Masters 2017: Singapore Qualifiers sign-ups now opened
Next post AMD’s Ryzen Threadripper processors are a dream for multi-threaded games