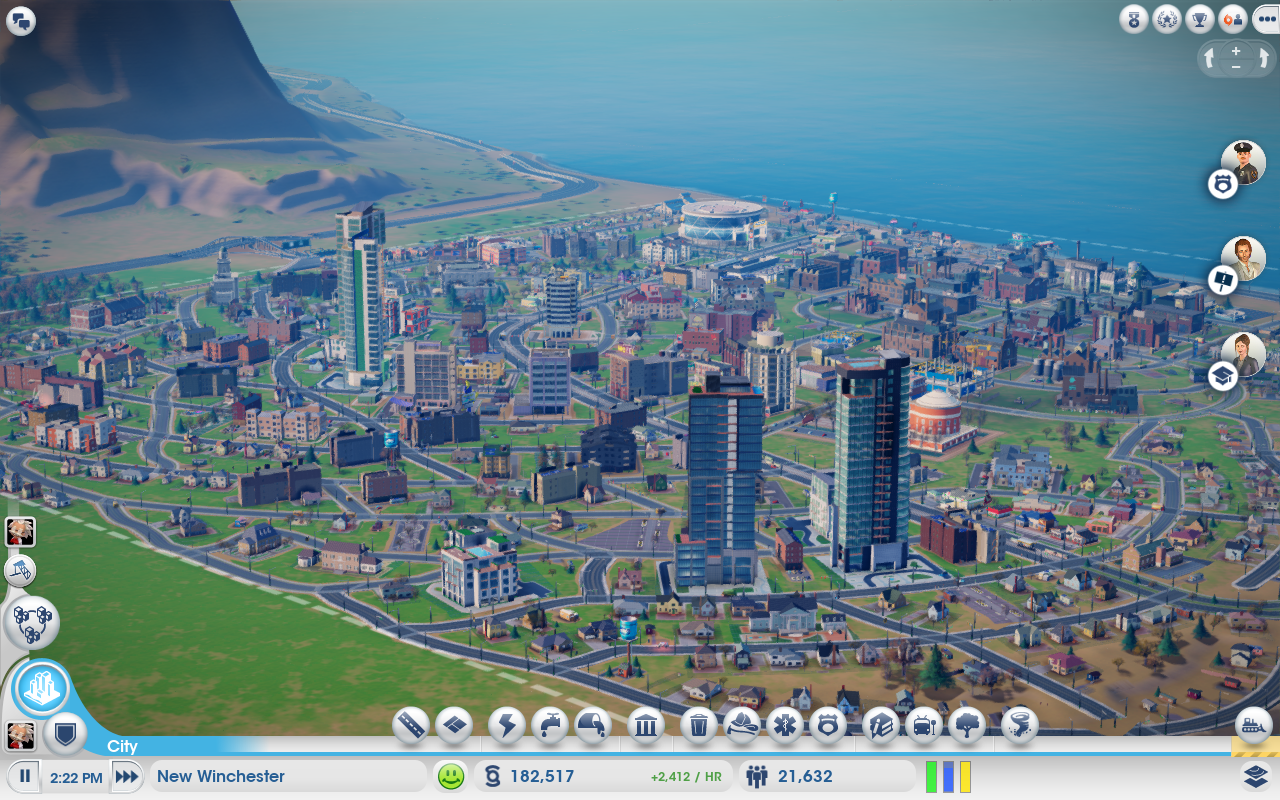 It’s been ten years since Maxis gave us the previous title in the SimCity series, but while SimCity 4 and its predecessors will have a place in my heart, it’s time to move on.

5imCity SimCity is the fifth numbered title in the popular city-planning and city-management franchise. It still lies on the same foundations as all the previous games but it also shows the good and the bad of what ten years can bring.

It is the first title ever to have a city in full three-dimensional 360-degree rotatable graphics, and what comes out from what you zone in your city is a sight to behold. A well-developed, densely-populated city will have pretty skyscrapers sprawling from the ground below, with its population alive with activity on street-level. But before you get to that, there is a little bit of work you must do.

Unlike SimCity 4, all regions are pre-made, each with several plots of similarly-sized land to kick off cities from. There is no God mode, and meticulous terraforming is a thing of the past. All the city plots are connected by road, and perhaps rail and the chance for future inter-city connections by ferry off the shoreline. Some of us will miss the ability to craft your own plot of land with fanciful mountains and valleys, but there are reasons for restricting all that. More on that later.

Every city starts off the same way. The connection of your first road to the regional highway beyond your borders. Roads are of the upmost importance in SimCity, playing a more essential role in providing real estate for residential, commercial and industrial (RCI) zoning as well as the connection to power, water and the removal of raw sewage. The best metaphor to describe the roads you lay down are like the circulatory system in the body as it circulates the water supply and removes the waste with an enchanting heartbeat, helping to emphasise the point that your city is a living, breathing organism.

There’s also the magnificent new way data is visualized throughout your city. Graphs and charts that measure population and resource consumption are laid out in tall, easy to understand bars that sprout from every single building enough to satisfy the data geek in you.

While a full orchestrated soundtrack doesn’t come and smack you on the face this time, you’ll still find that SimCity still has tunes that run during gameplay. Its soundtrack varies from day to night and speed of simulation, not to mention the full-blown hustle and bustle when zoomed-in on your city streets complete with coughing Sims, police sirens and rumble of exhaust. Speaking of streets, SimCity introduces something fans have been seeking for years: The ability to curve your roads however way you want. No more restrictive, unimaginative grids for your RCI zones with the arc, curve and circle tools. RCI zones now attach themselves to the curvature of the road and seep in their share of power and water and no longer go according to density, it will be the road it is attached to that will decide that. With several street and avenue types, roads can now handle different amounts of traffic and congestion. The more capable the road is able to do so, the denser your buildings will be, so watch for taller buildings and bigger factories as you upgrade.

SimCity brings an all new consideration to city planning in the form of expansions. As your city grows, your Town Hall will eventually have to upgrade to become a City Hall, allowing you to attach a department building onto the main building itself. This will take up space, and you could lay it down over some unfortunate Sim’s house or you could plan ahead and leave some space hanging around. This need for space is more essential to other “ploppable” buildings, such as Wind Power Facilities (for more turbines), rubbish dumps (for more landfill plots) and clinics (to handle more of the sick). There’s plenty of buildings with plenty of novel additions to attach, so hit the edit mode button often on every building you have.

A major concern with beta testers were the constraints of a city’s size. After a few hours of zoning, even when abiding to the games guiding when placing roads, your city will begin to feel very tight and there will be no other way to grow than up. It is then that your city will scream for more residential even when there is nowhere else to build. Thus beginning the fine balance between prioritising RCI zones and other civic and mass transit buildings.

When compared to its predecessors, however, SimCity seems to be very much easier in that your residents seem to like paying taxes so long as they live near parks, commercial zones and have their employment needs met. I didn’t find myself not making a profit during gameplay, and when I do get a deficit, it’s more because your city is growing, as towering apartments take some time to build. The game does start to scream “impending doom” when you do really badly, handing you an estimated time until the city goes bankrupt. Normally SimCity cities are built with little purpose. City Specialisation fixes that by allowing your city to become a tourist trap, a gambler’s paradise, a learned city of education or one that mines and trades off major real-world resources, such as oil, plastics and computer processors. My time in one of my cities were spent scrounging up the Simoleons for an Expo Centre that brought enough profit for me to lay down a University and a Processor manufacturing plant, so cities don’t necessarily have to stick to one specialisation. Why not go crazy and have them all?

When even that can’t help you earn funds, you could politely ask a neighbouring city. The all-new regions is what the “always-online” SimCity is about. You could claim the other cities as your own, but inviting friends to join in and start a city of their own with the “your-power-for-my-water” trade-offs that can be set up in a flash. Also, gather the region’s mayors and set yourselves off in deciding which Great Work is best for the region be it an international airport or an arcology.

I used the term “always-online”, and that’s what SimCity has become. It’s become a multiplayer online game, but not in the way you can start a war or send your Sims to battle. All your cities are housed online in EA’s servers around major countries and game progress, without local load and save functions to correct your mistakes, are synced every so often. Launch day in North America was met with gripes about the server and connection, and while this wasn’t so apparent on the server I was on (Europe West 1), sporadic loss of connection and inability to load cities were some of the troubles I faced playing in the afternoon. Preventing server strain is also a possible reason why city sizes are constrained with the lack of ability to terraform.

But while all our cities are now online and pitted against each other on online leaderboards and a live, global resource economy, the heart of SimCity is still very much in here. Put all the gameplay “restrictions” and server pains aside and (when you do manage to get resume your game) you can still see the things that makes SimCity such a draw to simulation fans by playing mayor.

Maxis has done a wonderful job in sticking to what the game represents despite all the new-fangled online gameplay and the addition of several new features. Some much needed, some unexpected. If you think you can well get over that it’s an always-online game without a monthly fee, then there’s probably no better city simulation game in the market today.