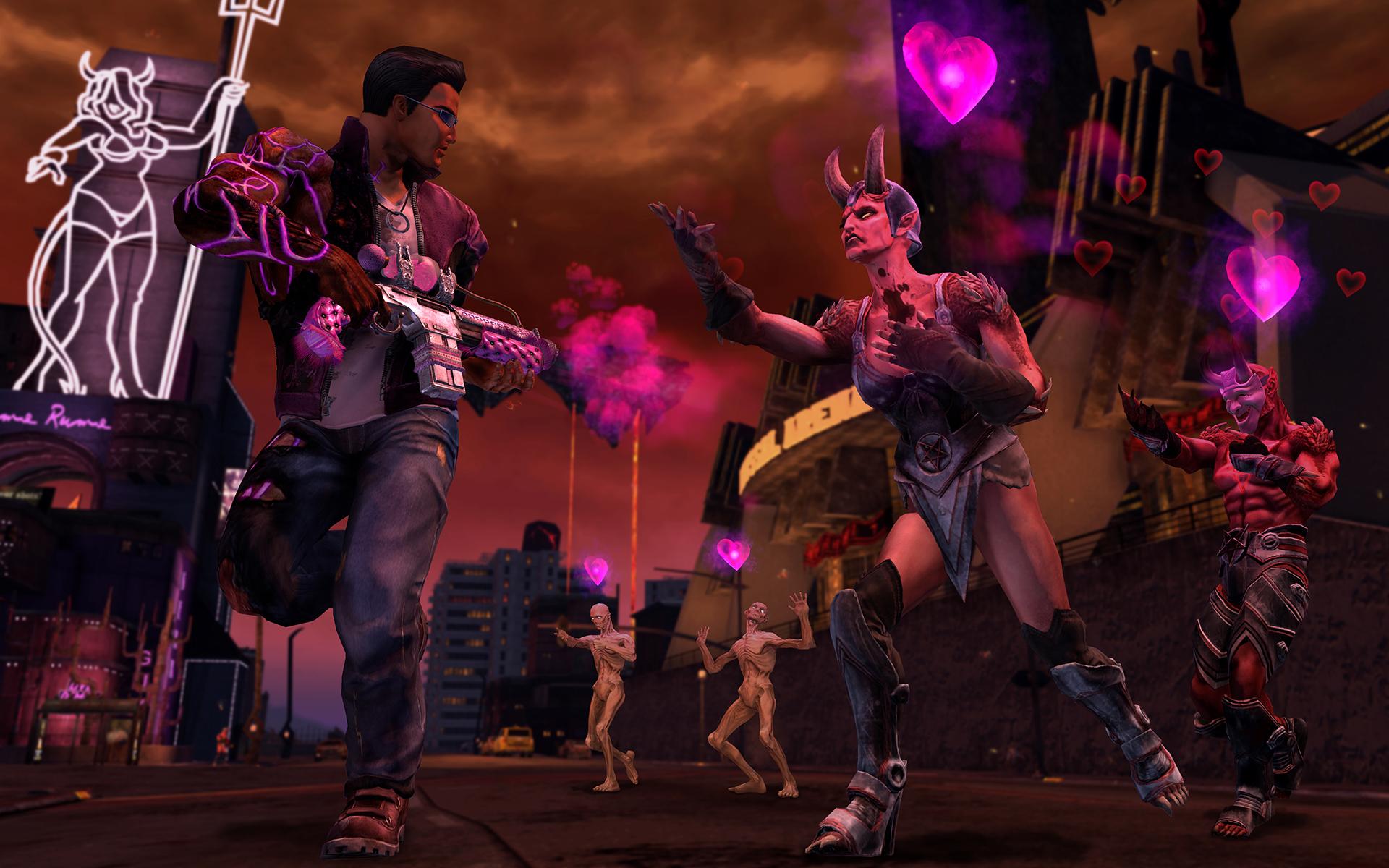 Where does a series go after blowing up earth? Why, Hell of course, as Volition points out with Saints Row: Gat Out of Hell. While this standalone doesn’t introduce any significant changes it does pack enough to avoid the ‘glorified DLC’ label It also has a great musical number.

It’s probably best if I begin by stating that Gat Out of Hell is meant for fans, not new players. It may not require previous games to run but it does require background knowledge for it to be a meaningful purchase. Besides, the older games are better value in terms of content anyway.

Our excuse to wreck the underworld is thus: The Boss, deemed worthy after Saints Row IV’s events, has been whisked through a portal for an arranged wedding with The Devil’s daughter. Tasked with saving him (or her, depending on your SRIV save file) are fan favourites Johnny Gat and Kinzie Kensington.

Gameplay-wise they both get the same upgrades and abilities, which feel like a missed opportunity – this being a standalone Volition had the chance to play to the duo’s strengths, rather than being a facsimile of the Boss. Gat’s fondness for fighting up-close could have translated into bonuses for being aggressive; whereas Kinzie’s sharp intellect could have yielded better control over abilities. I know the series has always given the player options but having no unique traits diminishes the impact of controlling established characters.

On the topic of characters, Hell’s inhabitants include familiar faces such as the DeWynter sisters and Ultor’s Dane Vogel, although it’s meeting the likes of William Shakespeare and Vlad the Impaler that gives the game its Saints Row charm. I don’t want to give away too much so I’ll just say this: The former playwright is now a resentful DJ at his own club, while the other can be found in a special prison. The very notion of these two locations existing in Hell in the first place is its own brand of comedy.

Unfortunately the missions themselves aren’t as creative. To attract Satan’s attention Gat and Kinzie are instructed to sow chaos, best done by completing activities. In other words, players basically tackle side missions – most of which are based on previous games – until the Satan-notice-me meter fills up, after which the game proceeds with the ending segments. That isn’t to say the activities are all bad. Gat Out of Hell lets players fly now, which works like gliding except we can navigate and flap for added power a certain number of times. Flying is so intuitive and efficient that I’ve driven a vehicle no more than three times. Naturally this makes flying-centric activities, such as catching falling souls, a great deal of fun.

My first game-breaking bug crept up while attempting to play Torment Fraud during co-op. The activity is a thematic retouch of Insurance Fraud, replacing Gat or Kinzie with a familiar denizen and running into traffic to reduce their sentence in Hell as a frail husk. Sadly, the bug in question simply disconnects the session whenever I tried it.

Aside from that and a few visual glitches, however, my experience was a relatively smooth and quiet one. Quiet because there really isn’t much music in the game, as it’s now restricted to certain spots in the city and as ambient radio in cars. That’s fine – we’re in Hell after all, and the excellent musical segment makes up for it.

All in all it took me a single night to complete Gat Out Of Hell, albeit not with a 100% rating and having seen only one out of five endings. I dipped back in to see what the replay value is like and, honestly, unless you’re a completionist or an achievement hunter, there won’t be much to hold you back for long. The lack of customization or new activities plays a huge role towards that conclusion.

Saints Row: Gat Out Of Hell exhibits the same humour, weapon creativity, and over-the-top action the series is known for, but its recycled activities and fleeting story keeps it from making the same impression the previous games did. If you loved Saints Row IV then you’ll want to pick this up, partly for story continuity and partly to shoot The Devil in the face.

Saints Row: Gat Out of Hell is an open-world action game for PlayStation 4, PlayStation 3, Xbox One, Xbox 360, and Windows PC. Developed by Volition together with High Voltage and published by Deep Silver.

Screenshots taken with the game at ‘Medium’ graphical settings.

Ade thinks there's nothing quite like a good game and a snug headcrab. He grew up with HIDEO KOJIMA's Metal Gear Solid, lives for RPGs, and is waiting for light guns to make their comeback.
Previous post Heart of Thorns, Guild Wars 2’s First Expansion Announced
Next post Titanfall, Battlefield and Other EA Games on Xbox Store Sale