Haptic feedback has been a part of console gaming for so long that it almost feels as if PC gamers are missing out. We’ve seen some attempts with gaming mice but Razer have opted for a different approach: headphones. The Razer Nari Ultimate are capable of giving your bass-heavy thumps a physical touch thanks to pair of real-time actuators. It’s like having a pair of subwoofers for your ears, rattling your skull with every percussive beat, sweep, and drop.

And you know what? They’re actually fun. 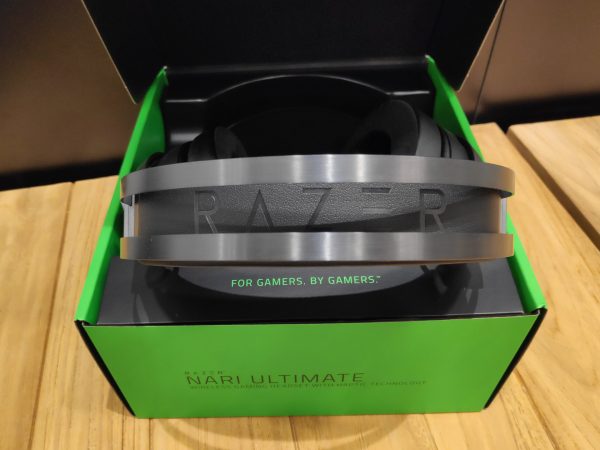 With 50mm drivers and inch-thick cushions, this closed-back, over-the-ear model is certainly chunky. The pleather is nice though I’m not too confident in its longevity. Thankfully, the portion that’s actually making skin contact is made from a different material, and those yielding cushions are apparently “infused” with a cooling gel too. They’re comfortable but my ears still felt warm within 30 minutes of office use — I’d expect plenty of careful cleaning involved if you’re perspiring often.

Other than the inward rotating cups, most of the Razer Nari Ultimate’s build is fixed. The self-adjusting headband is adequately padded and has about 1.5-centimeters of give, and the whole thing doesn’t feel heavy despite weighing just under 430 grams. The clamping pressure feels just right, too, so it many ways these are great when it comes to fit.

Style-wise they’ve definitely hit plenty of right notes. There’s a great complement of black and grey tones to be found, with the only color coming down to the RGB-powered Razer logo on either cup — those default to their usual greens but can be changed through the Razer Synapse app, either independently or synced to your overall Chroma lighting set-up.

I like how they’ve played with the textures in particular, moving from pleather to textured plastic, braided cable, and smooth metal to come across as as premium product. The Nari Ultimately won’t look too out of place among other “serious” headphones and I love them for it. 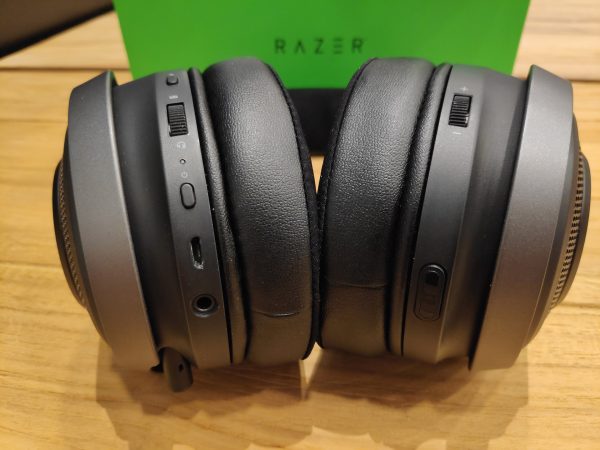 While it doesn’t bring DualShock 4-levels of clattering — which I think we can all agree is a wise move — the haptics on these headphones boast a surprising amount of finesse. They achieved this little feat by partnering with Lofelt, and the big cherry on top is that the actuators do not require software to work — they can inject those good vibrations from any source device. So while you get 2.4 GHz wireless freedom through the USB dongle (which has its own garage slot on the right earcup), you can also plug the headphones to a 3.5mm jack.

Otherwise, there’s not much else to differentiate it from the Razer Kraken: Tournament Edition we recently covered. You get the same THX Spatial Audio integration, the same extendable microphone, and the same game/chat balance scroll wheel. That being said, the Kraken has a wider frequency response and a cheaper price tag, making it the more appealing gaming headset.

So the question then becomes: are those Lofelt actuators worth the added cost? 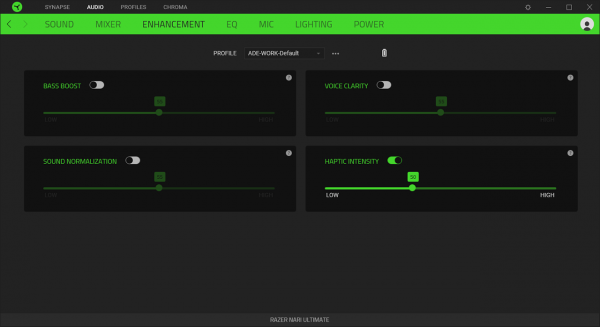 Having physical motors means you won’t have to crank the volume or overdo the EQ to “turn up the bass.” Yes, you lose quite a bit of detail in the low-ends with haptics enabled but I think the benefits outweigh that loss. These cans shine when it comes to electronic music, emphasizing the punchy bass notes many have come to love. In the absence of actual sonic vibrations from a massive subwoofer, these actuators approximates the effect surprisingly well. Plus, you can use these late into the night, too.

In Razer Synapse, I kept the bass boost disabled (sounds too artificial), left EQ at default, and bumped the haptic intensity from 50 to 70.

THX Spatial Audio heightened the Black Ops 4 experience considerably, though its haptics that takes center stage here. Intensity varied on the weapons used, with the M1897 Trench Gun and Blundergat topping the “satisfyingly badass” list; Seraph’s Annihilator pistol followed shortly behind. It wasn’t great for high RPM weapons such as submachine guns since the vibrations turn into faint staccato buzzing, so stick to slower rifles such as the Rampart to really feel that stopping power. Needless to say, explosive scorestreaks like the Attack Chopper and Thresher were thrilling moments too.

The PS4 recognizes the Nari Ultimate as a headset via USB. Here, the headphones easily danced along to Shoji Meguro’s jazzy compositions. There was a good mix of energetic and laid-back beats to draw out the Lofelts’ performance, and I was surprised to learn that they didn’t feel obnoxious for the latter. The quieter moments at Leblanc had softer, gentle swells to match the cafe’s tunes, yet thrummed to life during battles and more dramatic scenes. The songs are great to begin with, but “Last Surprise” and “Life Will Change” took on a more adventurous tone as I gallivanted with gaming’s most stylish thieves.

The last test called for a smartphone to check 3.5mm compatibility. The Nari Ultimate plays back sound like regular headphones when passive, so hit the power button to enable haptics. I had to play PUBG Mobile at a louder volume than usual for those actuators to kick into gear, but it largely performed to expectations. What’s nice is that the fights you run into feel just a tad more chaotic. The vibrations add weight to every shot fired, and can even make gunfire more startling after stretches of tense silence. 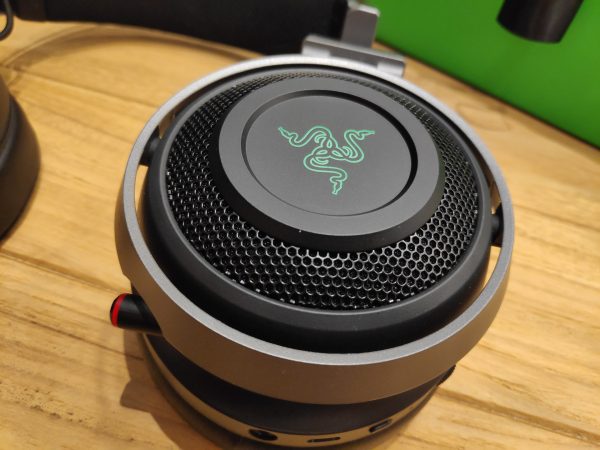 The Nari Ultimate sounds good for a headset. It’s coloured in Razer’s usual style, so that means a clear preference for the lower frequencies while the mids are a little flat and subdued. The high ranges do seem a bit of a mixed bag depending on what I’m listening to.

Synthwave artist Perturbator seemed like a good starting choice and I’m glad to report that was the case.  The build up to 1:20 in “Birth of the New Model” is highly satisfying, while “God Complex” may as well be a Nari Ultimate demo reel for all the layered frequencies at play.

At a colleague’s insistence, these headphones also took on Ariana Grande’s “thank u, next” like a club-going champ; K-pop’s Jennie and her “SOLO” also made for another great example. The vocals and other high elements may feel a touch confined (I prefer open headphones) but you’ll easily groove to the bass line, albeit one less nuanced, if that’s your jam.

However, it didn’t do Lovebites’ “Shadowmaker” any justice, turning the drums into a hazy mess. Disturbed’s “Down With the Sickness” also suffered from the same fate. I needed to raise their volumes higher for a firmer response from the Lofelts, though I wouldn’t want the potential hearing damage that came with it — fun for a track or two, nothing more. I also don’t think it pairs well with lo-fi tracks such as “Time Flies” by Luv.Ly since added energy isn’t what I want from the genre.

Forget watching TV shows or movies — I found the haptics unnecessarily distracting and headache-inducing past the 45-minute mark. 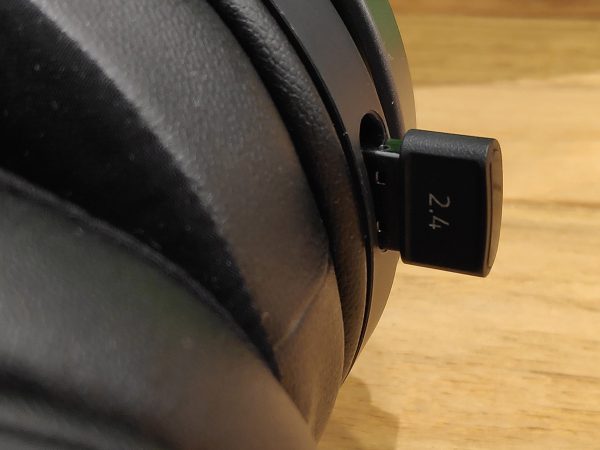 There aren’t any major hardware shortcomings I can find, though I will say that Razer’s policy seems a bit preposterous. In short, you’ll want to be very careful with that USB dongle as you can’t get a replacement piece. They say it’s because the components are uniquely paired, but surely there’s a better option than forking out hundreds for a brand new unit.

My other problems with the headset are largely minor by comparison. It still uses a USB-micro port to charge and has a vague battery icon in Synapse to indicate battery life. I wish there was a faster way to mute the microphone, and sometimes wonder why Razer hasn’t taken a cue from Logitech by including a fully programmable button.

Also, I’m sure the problem is far more complex than it seems but having it work seamlessly with the Razer Phone 2, rather than fiddling with a $30 adapter, would have been a nice push for the Razer ecosystem.

The Razer Nari Ultimate looks and sounds great for a headset, the haptic feedback making for a neat way of “spicing up” games and certain musical genres. The fact that you can get those haptics to work with any device through a 3.5mm connection really helps to sell that feature for core gamers, who may be playing across multiple devices. It’s an exciting pick if you’re looking for headphones that are tangibly different and fun than the others.

The only thing setting this back on the recommendations list is its price. At just over S$300, you’re honestly better off investing in headphones that’ll get you better results across games, movies, and music. Razer’s sound signature has improved over the years but up to half of that price tag is going into the the Lofelt actuators. That means somebody who wants a nice gaming headset have much cheaper options to look into, and they’ll sound just as good as what’s offered here. If you’re patient and good with sales, it’s even possible to get a pair of mid-fi headphones and a headset for a little more than what’s required here.

Hence, consider adding the Nari Ultimate to your headphone collection, not starting one with it.

The Razer Nari Ultimate gaming headphones are available now for S$309.90.
A unit was provided for review.

Ade thinks there's nothing quite like a good game and a snug headcrab. He grew up with HIDEO KOJIMA's Metal Gear Solid, lives for RPGs, and is waiting for light guns to make their comeback.
Previous post Jump Force shows off Boa Hancock, Renji Abarai, and Deku among others
Next post Review: Super Smash Bros Ultimate is the best incarnation of the series