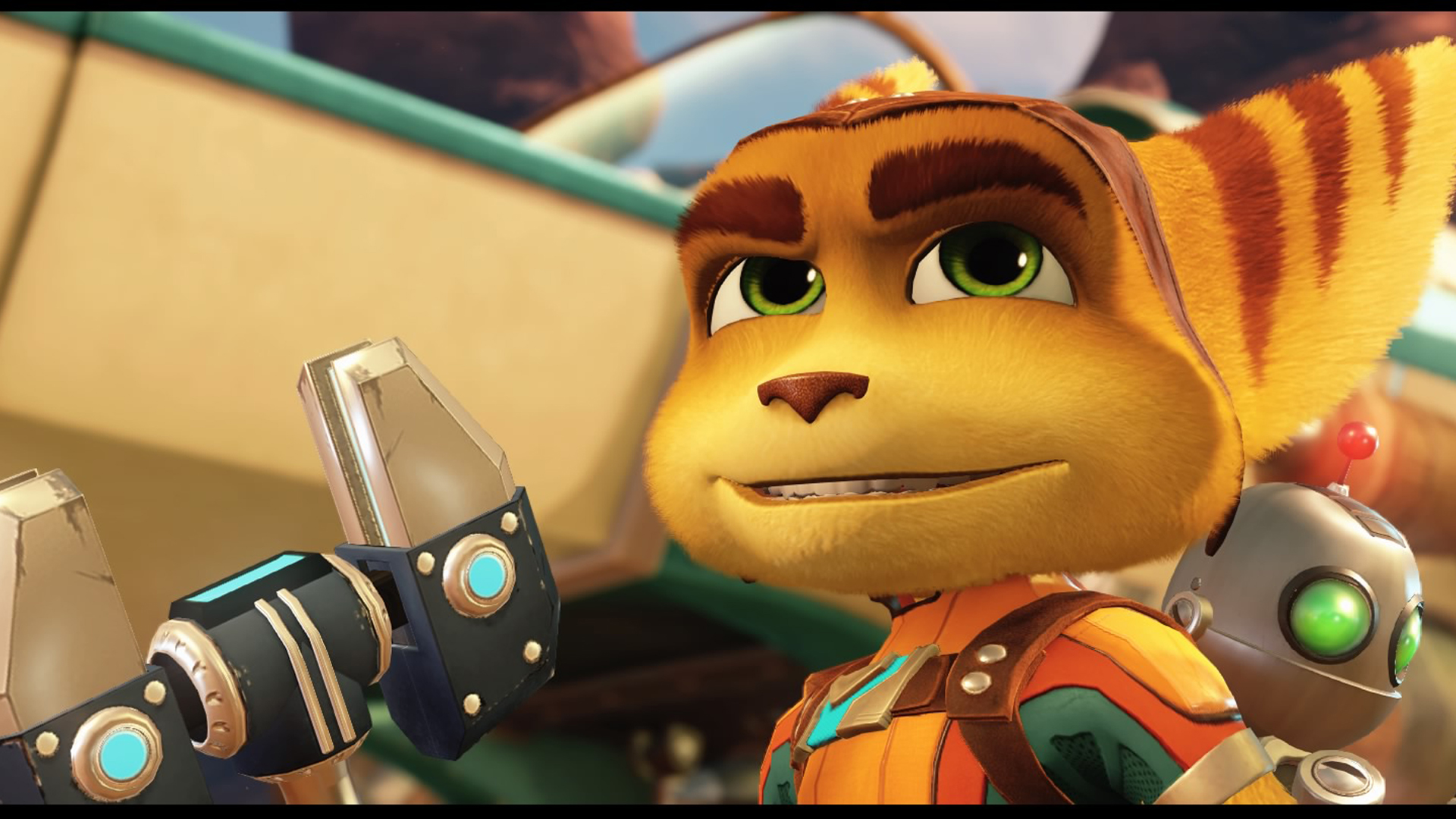 I had homing missiles, ricocheting disc blades, and even a lava-spewing flamethrower but none of these seemed appropriate for the brutish warbot approaching me. A towering hulk of guns and armor, eyes gleaming red, it was the very model of intimidation. So I turned it into a sheep, just before making it dance to ‘80s beats.

Ratchet & Clank harkens back to the PlayStation 2’s golden era, to a time where games as whole were far more playful than they were serious. This reboot of the 2002 original, a tie-in with the movie, sheds some notable content though it does everything else one could hope for: a complete rebuild with modern graphics and an updated gameplay system. The cartoonish, 3D platform genre had already peaked by the year 2002, granting Insomniac Games plenty of freedom to tackle a new series. Where Crash Bandicoot had jungles, a magical mask, and a mad scientist, Ratchet had planets, a robot companion, and a mad scientist – some things you just don’t change.

Naturally, it called for a joyful aesthetic and the new Ratchet & Clank delivers in spades. The game isn’t shy with color, transporting me through worlds that run from scenic to industrial, inhabited by all manner of creatures. One moment I’m fighting sentient toxic sludge through sewers or alien birds on a resort island, and the next I’m chewing through waves of robots in a space station.

And the benefit of stylized art is that it all brims with energy. Boxes and enemies burst into showers of bolts, the in-game currency, while lasers and explosions of varying intensities plaster the screen. It easily turns into a confusing mess, and at times it’s too messy, but it doesn’t take long to figure out enemy patterns and where to move.

The best part is that most of those lasers and explosions are mine. Weapons in Ratchet & Clank have always been a selling point and this game gladly reminds why. Not only is each unique in its application, they’re all incredibly fun to use too. Much like the game itself, what at first seems normal and idyllic quickly gets turned up to eleven.

My lava-spewing flamethrower began life as any regular old flamethrower; it was only through an excellent upgrade system that it finally evolved into a kid’s dream. The same can be said for my blaster pistol, which now shoots multiple bolts of plasma, or my sniper rifle that essentially slows down time. Then there’s the delightful Mr. Zurkon, something I’ll leave you to discover first-hand.

The game plays along too. Either the weapon description starts including words such as “illegal” or “irresponsible” or the vendor starts commenting how you’re becoming too powerful. It’s a nice reinforcement of the power fantasy we’re on.

As mentioned, upgrading is a well thought-out process. Based upon a hexagonal tile system, I’m free to decide how I’d like my weapon to improve. Perhaps I want to pack more ammo or need a higher rate of fire – either way, the choice is mine. The board fills up eventually and, with the right pre-requisites, an Omega variant can be unlocked for Challenge Mode, squeezing out even more upgrades. Challenge Mode basically lets us replay things from the start, keeping only our weapons, bolt count, and collectibles. Did I want to play it all again? Definitely! The mode is great for using weapons that were neglected in the earlier run, hunting collectibles and trophies, or just testing skills against tougher enemies. Make a point to grab those Gold Bolts because they unlock some neat options.

However, as great as it is, it also points out some of the game’s shortcomings. Ratchet & Clank takes out a number of visited planets from the original to, presumably, match the movie. Anyone can finish it over the weekends, maybe even a Challenge run too if they’re set on it.

This is where we get into a highly subjective territory, because while we’re not getting a lot of hours, I found all of it to be deeply entertaining. With game length such a contentious issue in recent years, we’re seeing more single-player games turn to large open worlds padded with boring side quests. And more often than not, they overstay their welcome at one point or another.

Not so with Ratchet & Clank. Downtimes are purely limited to moments at the vendor, solving puzzles, or checking out a holocard collection that’s filled with lore from previous games. Other than that, the game’s either chock-full of action or settling down for a cut-scene.

The actual problem stems from the lack of mini-games the series is known to have, particularly the arena combat mode. Now, the only one present are the hoverboard races, though even that is limited to two courses. In past installments, completing these optional mini-games served to either unlock hidden content or earn bolts for an elusive special weapon – fun, challenging little side activities that extended the game’s life.

Their absence only makes the campaign’s brevity all the more obvious. Which brings us to story, the one aspect that prevents Ratchet & Clank from reaching its full, five-star potential.

I’d like to blame this shortcoming on the movie, for the original didn’t grapple with this problem. Without spoiling things, the narrative feels rushed and disjointed at parts, mainly when it intersects with scenes from the film. Events just jump from one to another without giving our characters room to develop, or enough of a reason to drive certain plot points.

In keeping things family friendly they’ve also altered the dynamic between Ratchet and his sidekick, Clank. Here, the two become best friends right from the start, which isn’t as captivating as compared to seeing the two form a bond throughout their adventure. They’ve left out plenty of the edgier, adult humor popular at the time too – I mean, we are looking at a series with a sequel called “Up Your Arsenal”. Ratchet & Clank isn’t the game to turn to for month after month of gameplay. It is, however, a tight and well-presented package that makes entertainment its life’s purpose from start to finish. Action positively gushes out of it, letting us liven up various alien locales with a collection of the galaxy’s most dangerous weapons. Whether the controller is in your hands or in someone younger, I’m pretty certain you’ll both be staring on in wide-eyed wonder.

Ratchet & Clank is available now for the PlayStation 4. Developed by Insomniac Games and published by Sony Computer Entertainment. Rated General by the MDA.

Ade thinks there's nothing quite like a good game and a snug headcrab. He grew up with HIDEO KOJIMA's Metal Gear Solid, lives for RPGs, and is waiting for light guns to make their comeback.
Previous post Nintendo confirms 2017 release for NX console
Next post Sunset begins for Wakfu Raiders (Updated)