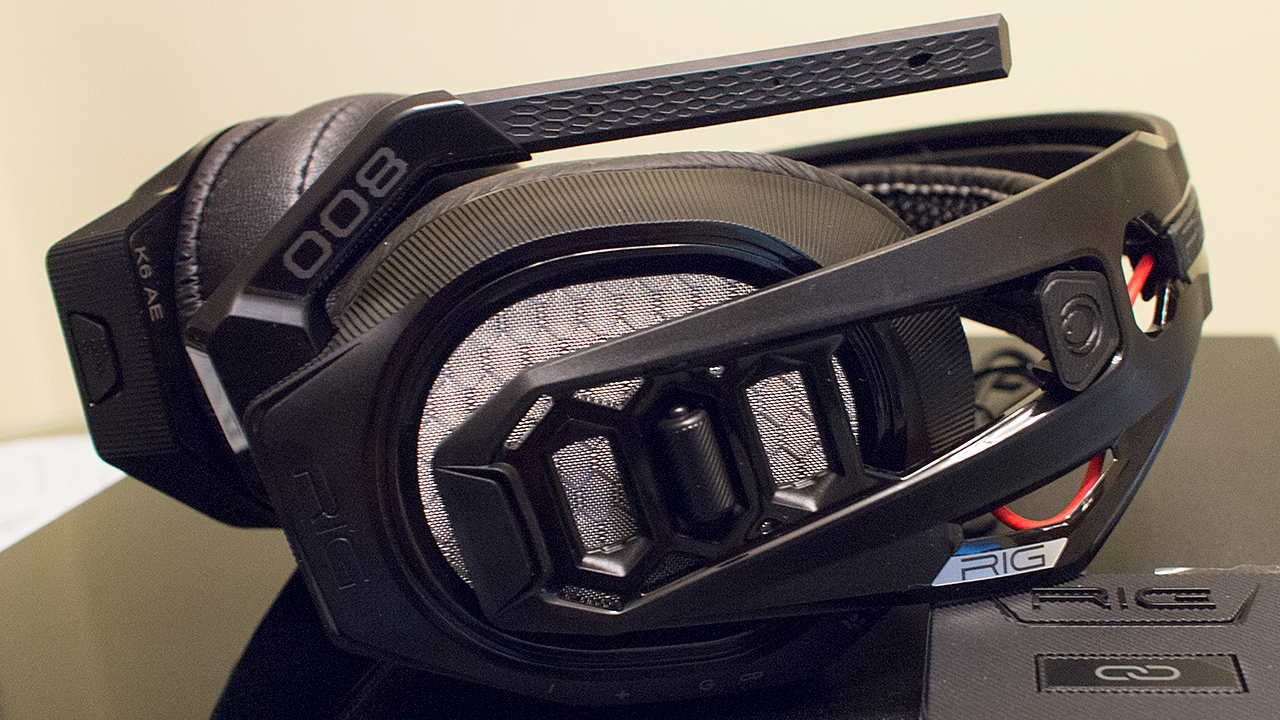 Wireless gaming headsets often feel like a compromise, where questions of price, comfort, and quality get obfuscated by battery life and convenience. While I’d still recommend headphones paired with something like a ModMic for PC, that combination falls flat when it comes to console gaming. I’d long though we’d just have to settle for what’s out there, and then the Plantronics RIG 800HS arrived.

Made specifically for the PlayStation 4 (there’s also the RIG 800HX variant for Xbox One), this is one of the most comfortable gaming headsets I’ve tried by far. The magic comes down to the memory-foam ear cushions, cased in soft pleather, and the lightweight construction (290 grams) of it all. I was pretty skeptical upon seeing the thin headband and plastic frame, and certain design decisions were a bit off-putting too. Then I put the headset on and felt my doubts melting away. Comfy cushions aside, the over-the-ear cups are a perfect fit, with just enough clamping force to stay on. I’ve tried supposedly full-sized headsets that pinched and trapped your ears, while others may as well have been a latched-on headcrab with how tight they get. The RIG 800HS confidently sits among mid-fi headphones, and that alone is worth the price tag. To be fair, I haven’t tried Sennheiser’s gaming line yet, but those are all wired.

The faux leather did raise some concern given our humid weather. The ones of the RIG 800HS work great in air-conditioned offices and hold up well in living rooms too, but if you’re cooped up in a warm bedroom then it may get uncomfortable by the second hour. My ears weren’t feeling hot per se, since the material is fairly breathable, but the cushions were getting a little too skin-sticky for my taste. Bear in mind we haven’t entered our warmer months either, so consider where you plan on using these.

I should also point out that the height adjustment isn’t ratcheting or sliding, since that would have likely added to the weight. Instead, the ear cups are simply snap-fit to the frame along three vertically arranged slots. They’re easy to set, and I was lucky enough to find the default center position perfect, though the lack of finer control may prove troublesome to others. The plastic build doesn’t inspire confidence either; it simply doesn’t look as premium as the sub-$300 price tag suggests. As mentioned, the RIG 800HS is designed for the PlayStation 4. Since the console doesn’t support Bluetooth headphones, Plantronics provides a wireless station connected via USB . It comes with an optical cable and port for those with earlier PS4 models, but the Slim (and Xbox One) only requires USB. You can hook it up to a PC too, if you’d like — everything works just fine. To nitpick a little, I did wish it came with an angled USB adapter, purely for neater console aesthetics. After all, this thing is more or less a permanent attachment now.

Once powered and connected, the headset will spook you with some verbal feedback. There doesn’t appear to be any way to change those into beeps or something less distracting, but I learned to live with it after a while. There’s genuinely not much in the way of set-up by this point, other than volume control and equalizer. For the latter, there’s a button along the bottom of the right cup that cycles through four presets. According to the user guide, these are Plantronics’ signature sound, a “seismic” bass boost, as well as “intensify” and “vocal focus”.

I maintain that sound is a matter of personal preference, since we’re not exactly shopping for reference headphones. With that said, the 40mm drivers on the RIG 800HS offers a balance that works well across the entertainment board. Vocals are crisp, with enough mid-range clarity and separation to make it a good musical companion. I was surprised by the soundstage too, which makes it a great fit for shooters such as Star Wars Battlefront II (for all the game’s problems, it does have some great sound). In what is good news for some, the headset remains faithfully stereo and not bogged by virtual surround. Nonetheless, the imaging on the RIG 800HS should play well with PC options such as Dolby Atmos. Some will also be happy to hear that the bass is present but not overbearing, blending smoothly into the mids rather than thumping aside everything else like some other headsets do. For some context, I don’t consider myself a bass-head and do prefer open-backed headphones. I also recommend trying out the “intensify” option for movies and games if you’d like some extra oomph, as it bumps up the low-end rather well.

So what did I try it with? All sorts of things. Other than Battlefront II on PC, I also put the headset through Dragon Ball FighterZ, Taiko no Tatsujin: Drum Session!, Nioh, and a bunch of demos on the PlayStation 4. I also watched a few shows through the PS4 Netflix app, before heading back to the PC for some Spotify and locally-stored music. Let’s just say that audio performance is not the weakest link here; I’m firing that arrow at the microphone instead.

The recording quality and uni-directional pickup is good, and the flip-down boom is smooth, swift, and painless, if a tad low. What lets it all down is the noise-cancelling, which only holds up in quiet rooms. Listeners heard background chatter and the odd clink of glassware more often than usual, compared to other headsets or the old ModMic. It’s likely a trade-off for having your voice come across a little more natural and is ultimately something only your group of gaming friends can comment on.

Plantronics states the headset has a wireless range of up to 10 meters, which has held reasonably true in a five-room apartment. If the base station is in the living room then I can easily grab a refill from the kitchen or visit any of the bedrooms without losing a signal. That becomes less of a guarantee if the connection has to go through multiple walls or mirrors, but that’s not what this was built for anyway.

Battery life is superb and will easily last through marathon weekend sessions, provided you’re a reasonable human being who doesn’t game for more than twenty hours straight. I did leave the headset stream some PC music overnight and found it still going at the 22-hour mark, though I’m not sure if using the microphone as well would have shortened that timespan. In any case, the battery on this thing will be the least of your concerns (well, until the day it finally dies). Just be sure to keep it regularly topped up, as it takes four and a half hours for a full recharge.

Now, there’s something fairly critical that’s not mentioned on the box. There’s an extra dial on the left ear cup that balances the levels between in-game audio and voice chat. This feature requires the optical cable on the wireless station to be plugged in. You may recall that the PS4 Slim does not have an optical port, which means one of their marketed features will be rendered useless unless you have the original model, a PS4 Pro, or fork out extra for a HDMI audio extractor.

On a lesser note, I’m not fond of the volume control wheel. For one, it uses a textured rubber grip when they could have used this opportunity for some metal flourish. More pressing is how the wheel is a free scroll, so you’ll be twiddling your thumb up or down multiple times to find the right volume, rather than feeling for a ridge or bump and adjusting it once. Maybe it’s for hearing safety concerns, but this simply turns proper listening habits — that is, always lowering the volume before putting something on — into a chore. It’s not quite perfect but the Plantronics RIG 800HS is exactly what I was looking for: a go-to recommendation for console gamers. It’s lightweight, comfortable, and most importantly, sports a great sound signature (remember: it’s a wireless headset). It isn’t physically or sonically fatiguing, either, so you can bank on some great gaming nights and weekends without having to worry about discomfort or battery life.

The Plantronics RIG 800HS is available locally for S$289.
A unit was provided for review.

Ade thinks there's nothing quite like a good game and a snug headcrab. He grew up with HIDEO KOJIMA's Metal Gear Solid, lives for RPGs, and is waiting for light guns to make their comeback.
Previous post Welcome the Lunar New Year with PlayStation discounts and giveaways
Next post Final Fantasy Royal Edition arrives on 6 March, comes with new dungeon and features