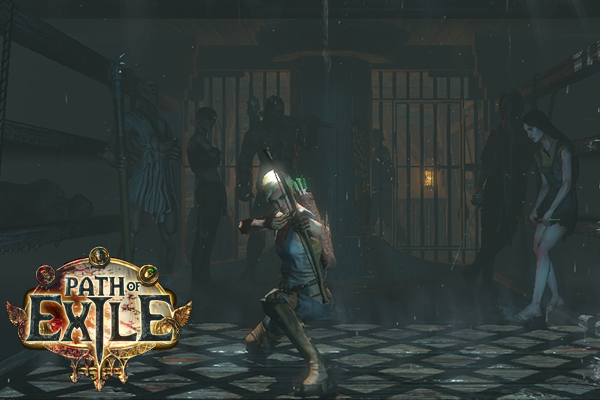 Kill for loot to kill bigger monsters for better loot – that’s the action role-playing game in a nutshell. Made in New Zealand by Grinding Gear Games, Path of Exile owes much of its success to the blend of old and new. The inventory grid and brooding aesthetics are comfortingly familiar, hearkening back to the glory days of Blizzard Entertainment’s Diablo II, but start playing and its distinctions soon come to light.

Skill gems, acquired like any other item, determine hotkey abilities such as Fireball. Link a support gem and now that Fireball splits into two. Ding! There’s that passive skill tree everyone talks about. The game doesn’t even have coins – everything is bartered for crafting materials. These seemingly simple changes have huge implications, granting a great deal of replay value to arguably one of the most repetitive genres around.

Free to play (the way you want)

Six classes – seven after completing the campaign – serve as basic templates. The passive tree is shared among all thus the only differences are starting attributes and positions. For example, a Witch gets immediate access to Intelligence nodes while a Templar gets Strength. Nothing stops either from reaching the other’s branch, save for having enough points.

It goes further with the Keystones concept. These introduce significant changes to a character’s play style, generally at an expense. Chaos Inoculation renders the player immune to Chaos damage but reduces their maximum health to one hit point; this means investing heavily in Energy Shield upgrades or being amazingly dexterous with a mouse. Consider the fact that gems also have no class restrictions and a whole realm of possibilities opens up. For a time where more games are tooting their customization horns, no amount of facial sliders can compare to playing the way you want.

Yet there’s more to the world of min-max efficiency than class builds. Path of Exile doesn’t shy away from giving out rare and unique drops, but the truly coveted items are augmented using Orbs. Fun fact: these Orbs also pass as currency. Already there are guides and spreadsheets online explaining the market and item values.

In short, the game has a lean crafting mechanic. The benefits these Orbs grant are too random for my tastes, but it’s certainly more attractive than the usual gambling. If upgrading that belt doesn’t sound good then save; somebody in trade will have something nice eventually.

A pity for Piety

Thankfully, mucking about with these new systems distracts us from the underwhelming story. Players begin aboard a ship bound for Wraeclast, a treacherous home to banished exiles. How treacherous? For starters the ship gets wrecked and the only other survivor gets his face eaten by a former passenger. It’s just as friendly further inland, so expect more weapon-swinging and less handshaking.

It’s during the first few hours where the narrative stays engaging, supplemented by the audio logs scattered across the land. In the first Act these are carved boulders telling of the Karui invasion, of how they were driven back by the corruption. It weaves a foreboding mystery as we journey deeper, only to have it shatter when we learn of Piety and her date with ancient magic. Here the tale devolves into a predictable chase, hampered by a lack of urgency due to the nature of quest-driven games.

Skeletons in the prison

Path of Exile makes up for the lackluster story with art. There’s a variety of detailed environments to explore, from damp caves to lush jungles and ruined cities, each with their own enemy set. GGG have somehow managed to make these maps feel oppressive, where safety is as alien a concept as civilization. Special mention goes to the lead-up to Brutus, the final boss of Act 1 – those areas captured trepidation perfectly.

Unfortunately, there’s a problem. All hostile areas are randomly generated and instanced so layouts are unique to the player or party. These instances close after 8–15 minutes if unoccupied. This makes trekking a huge chore, worsened by the respawned enemies. Another mild annoyance lies with the soundtrack, which grows incredibly dreary once the hours tick away. Listening to something more upbeat or a podcast should fix things nicely.

Whatever other complications Path of Exile suffers, it’s clear that microtransactions aren’t one of them. This is a title where the only mention of a real money store is on the login page, and even then there’s nothing but cosmetics and stash upgrades. In-game, the small dollar-sign button is in an inconspicuous corner of the menu. No locked classes, transaction fees or any kind of paid service. The stash upgrades aren’t even necessary as everyone gets enough space.

This leaves us with a final question: Is the Garena version different? It’s still in beta so yes, quite a fair bit is missing. Namely we’re behind on patches, hardcore leagues and store items. The exclusive Garemon pets are highly distracting too. Those aside, the game runs fine. There’s an active community already and, barring a few trolls, they’ve been helpful so far. If Garena stays on track, changes only the cosmetics and runs a few leagues, things should chug along smoothly. What the future holds we’ll just have to see.

Path of Exile seems like the logical next step for the action RPG. The loyal, hardcore player base is finally rewarded with a wealth of options, whereas the rest of us get a solid cooperative experience. Besides, it’s nice to have a game not constantly reminding us about our wallets. Now go pop some walking piñatas already.

THE VERDICT: PLAY IT

Path of Exile is developed by Grinding Gear Games and distributed in Southeast Asia by Garena. It is only available on Windows PC at the time of review for the low cost of zero dollars.

Ade thinks there's nothing quite like a good game and a snug headcrab. He grew up with HIDEO KOJIMA's Metal Gear Solid, lives for RPGs, and is waiting for light guns to make their comeback.
Previous post AuditionSEA’s Clubber of the Year 2013
Next post Hello, Clementine: Telltale's The Walking Dead Season 2 Now Available