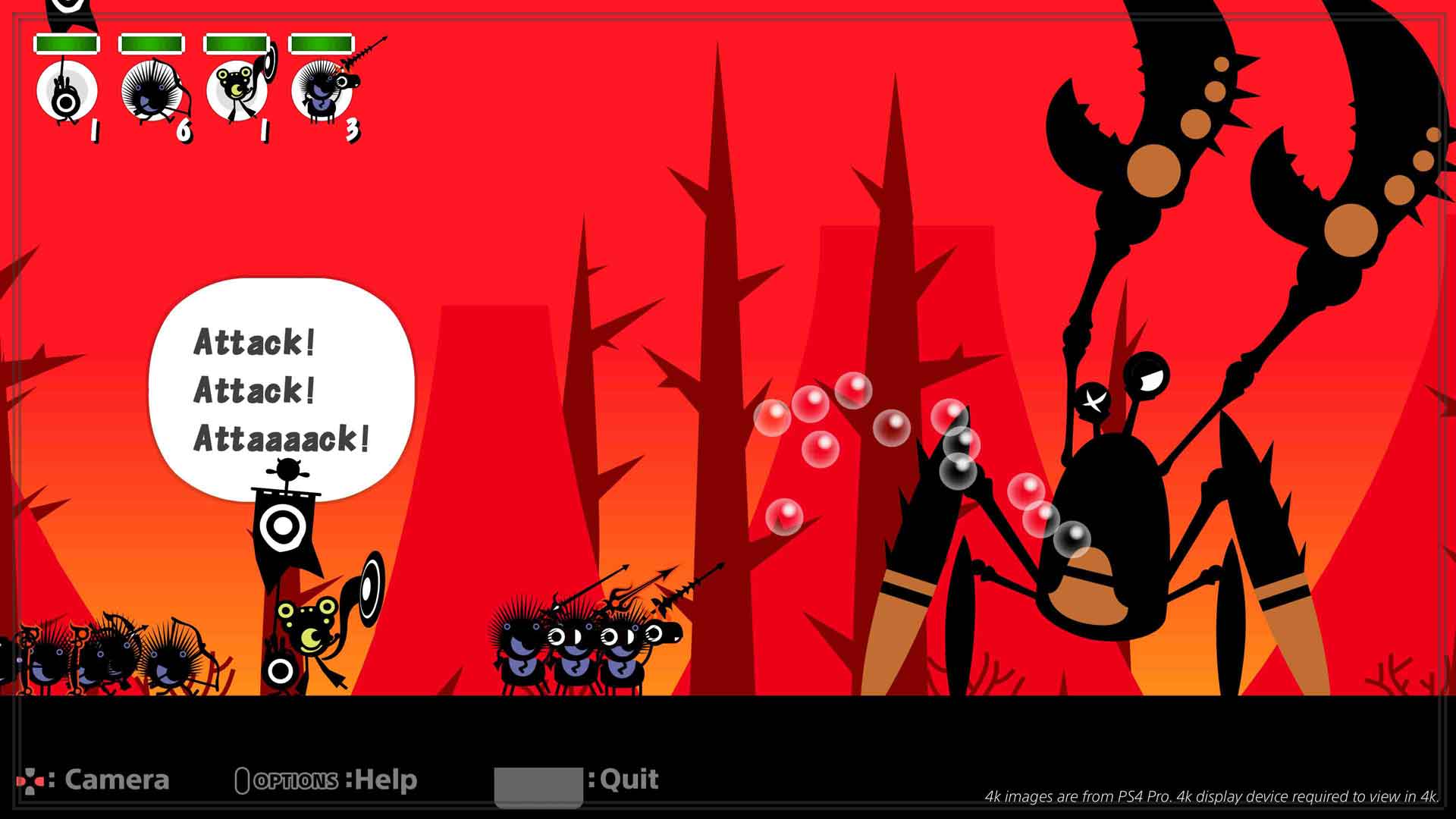 Completing the remaster trinity is another classic PSP title in Patapon, a whimsical pseudo rhythm game of sort. It was also a fantastic showcase of the Portable PlayStation handheld visual capabilities, and Patapon is a splendid example of how a great gameplay can stand the test of time. Oh, and the enhanced HD visuals certainly don’t hurt.

If you have never played the original, Patapon has you guiding little creatures called Patapons as they traverse the various stages. Patapons look up to you as a god of sort, and depend on you to guide them as they explore and fight off their evil rivals. The catch is you do all of that by beating out drum commands to a four-beat rhythm (we did tell you it’s a rhythm game!). For example, drumming out “PON PON PATA PON” commands them to attack whatever is nearest to them. Other similar four-beat commands get them to do other actions.

While the game is simple to learn, mastery requires nerves of steel and unwavering concentration. That’s mainly due to the fact that once the action heats up you’ll need to constantly adjust your commands to keep up. Miss a beat and you leave your Patapons opened to attacks or even counter attacks. Juggling commands, while maintaining situational awareness, and being alert enough to adapt on the fly is as challenging as it sound, but extremely rewarding when you manage to complete a difficult stage.

Nonetheless, Patapon can hardly be called deep. There really aren’t a lot of basic commands to learn and the stages tend to feel blend after a while, especially if you’re playing a marathon session. It’s not a stretch to say that after an hour of play, you’ll have seen everything the game has to throw at you, gameplay-wise at least.

Luckily, the game’s jump to HD visuals means the game’s minimalist art style (reminiscent of the above-mentioned LocoRoco) gets a chance to really pop on your TV screen. The PSP’s 480 x 272 resolution is practically outdated next to today’s Full HD or 4K screens, and Patapon is a feast on the eyes in its new, remastered incarnation.

Lines are crisp and sharp, colors contrast each other with startling clarity and everything moves at a steady framerate. However, while it’s true that the visuals have been a HD face-lift, the pre-rendered videos that are scattered throughout the game are still relatively low resolution. When played on a Full HD display, for example, the videos tend to look low-res and frankly, not up to the standard set by the rest of the game.

Luckily, they aren’t essential to enjoying the game. That’s mainly due to the cute voices, which gives the game a distinctive style of its own. They bring an adorable charm to the game and add to the Patapon’s stylish visuals, making for an enchanting unique mix.

If you’ve missed out on playing Patapon the first time around, you owe it to yourself to try out the budget-priced remastered version. However, the lack of new content is a bit disappointing, especially if you have played the original. Despite that minor niggle, Patapon still deserves a spot in your PS4 collection.

Sal's just your average hardcore gamer. He started gaming on the NES in the 80s and has been ever playing since. Sal doesn't care about which platforms games are on, only that he wants to play them all!
Previous post PSX SEA – Marvel vs Capcom: Infinite is for fans old and new
Next post Review – Netflix’s Death Note could be a lot better