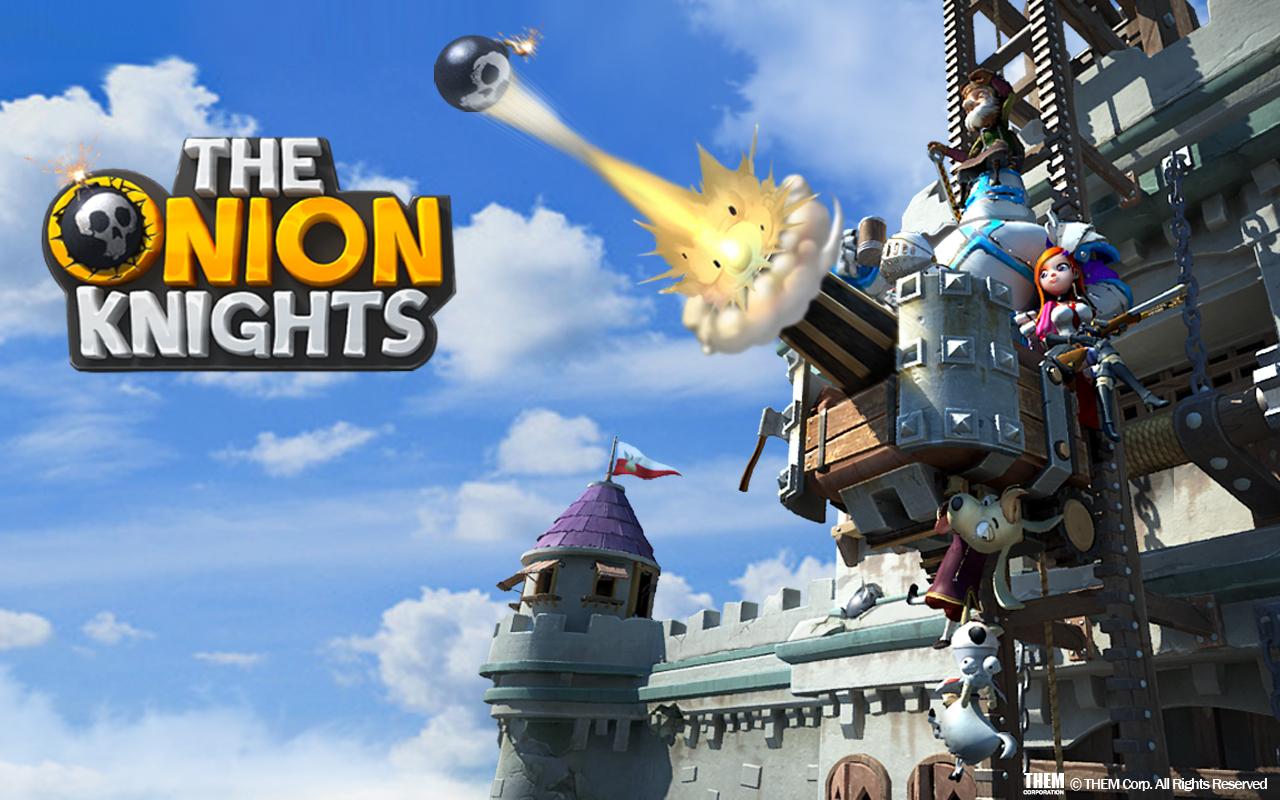 The first time you launch The Onion Knights, it will definitely catch your attention. Watching the opening cutscene made me feel even more intrigued, especially this line:

With this impression, I expected an interesting perspective of a food fight environment involving a selection of vegetables. Unfortunately, as I spent more time playing, it turns out to be a type of fortress-defence title involving fantasy characters, and none of them have any relation to food, condiments or crockery, including the backdrop. The closest reference is PumpkinHead, a pyromancer with a Pumpkin face but he does not look like someone from the kitchen either!

The core of the game is simply protecting your castle, situated on the right of the screen, against a barrage of attacks coming from the left.

Your main arsenal is a cannon that you can move vertically, as it continuously fire single projectiles to break the assault. In your aid, you can summon three skills and items and up to three heroes. Your level of defence can be enhanced as you gain access to new skills, items and heroes, all of which can be unlocked and purchased as you progress.

The interface of the game appears to be lifted from a PC or mobile game with its cursor-finger icon, and while the navigation works on a console, it takes a while getting used to. The tutorial gets you up to speed about the objective of the missions, but it did not specify on how to execute the different skills, items and heroes. I came across these in-built useful guide accidentally while browsing the menus.

The level of graphics also seems ported from an earlier source. While it looks good on a tablet, smartphone or a decently sized PC monitor, playing this game on my 48inch Smart TV somehow amplifies the less-than-stellar resolution of the images. Nevertheless, gameplay remains smooth.

I like how The Onion Knights synergise its gameplay into other aspects of unlockable content. Consistently playing and attempting to score the full 3-star score for each stage will contribute to in-game statistics and experience points (XP), allowing you to redeem side rewards in the form of gems.

These gems are rare and cannot be bought using real-life currency, something which parents would appreciate. Each stage challenges you to an additional objective and meeting it would allow you to pick one of three mystery rewards.

On top of that, you will be able to unlock in-game figurine sculptures and jigsaw puzzle pieces. There are four sets to collect and completing them earns you more gems.

Unfortunately, the game is designed to reward only those who persevere and are willing to invest long hours. Those aiming for PlayStation trophies will have to persistently play and replay the stages. Protip : Be sure to buy and equip the Golden Dice to multiply your chances to earn more gold in every session. This will allow you to purchase upgrades a little faster.

Overall, if you want something simple to play in between pockets of free time such as keeping a lookout at the sleeping baby or waiting for the washing machine to chime, The Onion Knights is worth considering. However, if you’re back home from a long day at work, the repetitive process in this game may help you to retire to bed early.

The Onion Knights scores with its short gameplay sessions for busy gamers, but the steep eligibility to qualify for trophies makes it less encouraging to play.

A digital copy is provided for review.

Neezum has been exposed to many videogames since the '90s. Nowadays, he tries to juggle his passion amidst other commitments with a wife who doesn't share the same hobby.
Previous post Resident Evil 7 will be the first 3rd-party game coming to Xbox Play Anywhere
Next post Ariana Grande now in Final Fantasy Brave Exvius until Feb. 2