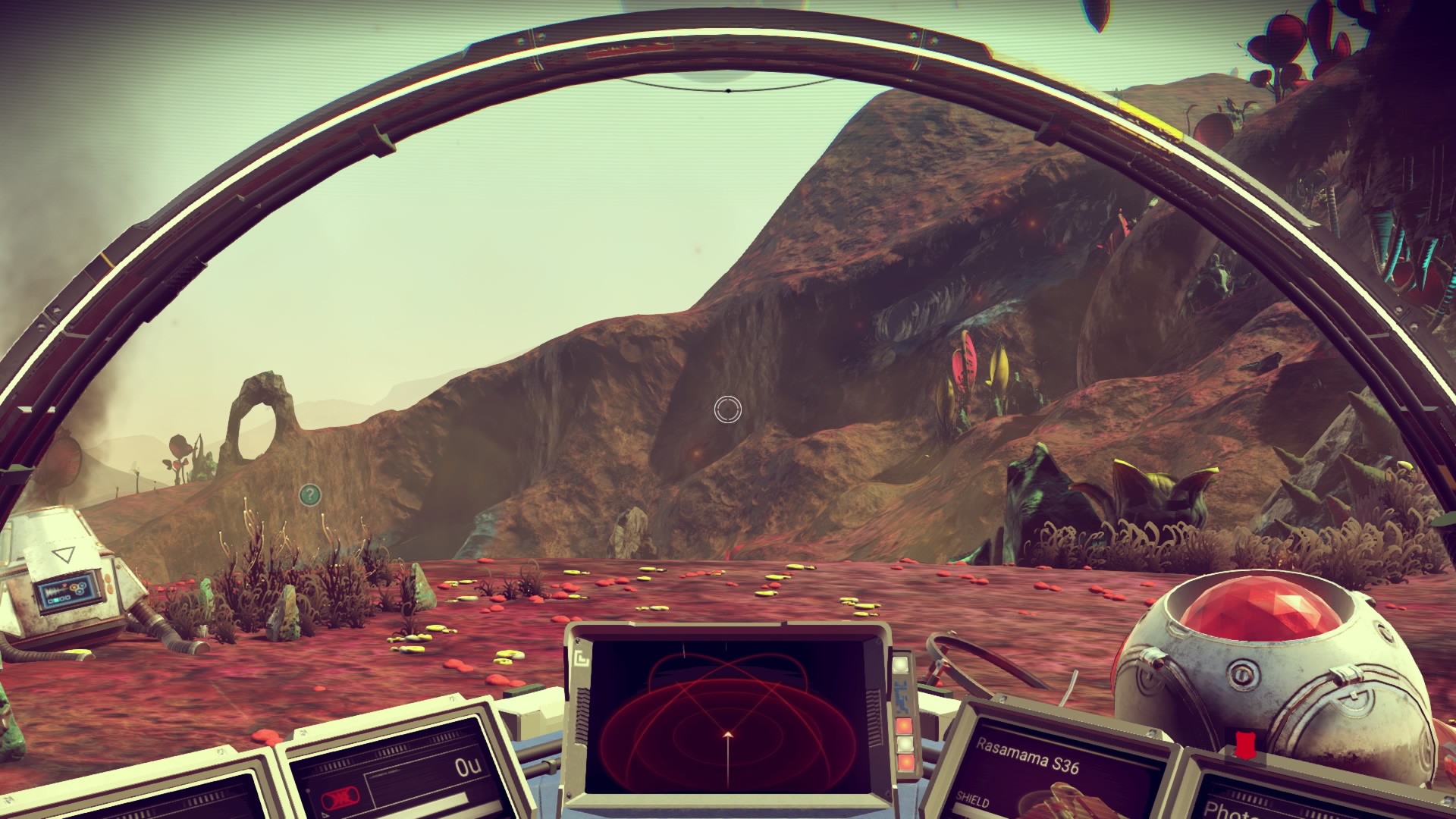 Exploring the infinitesimal universe is fun and fascinating, but it can be immensely annoying too. No Man’s Sky does have the interplanetary space-faring magic it advertises, but how much it satisfies depends on whether you enjoy the arduous, cyclical churn of accumulate-create-migrate in exchange for a glimpse of the curious alien oddities that fill up each world you step foot in.

As one of the most anticipated titles to be released this year, Hello Games presented trailer after trailer detailing just how large and populated their constantly expanding, procedurally generated universe was. The appeal lay in not just its scale, but also its commitment to provide a different experience with every planet left or landed on.

Space battles – checked!
Undiscovered worlds – checked!
Shooting at rocks – checked!
Weird and wonderful flora and fauna – checked!
A giant sandbox so vast that you’re bound to find a celestial body where you can plant your flag and call “First” like you’re on a popular YouTuber’s video – checked!

And for a little indie team like Hello Games to develop one of gaming’s most visually and conceptually unusual ideas in recent times, it’s easy to hop on board the hype train and set those expectations sky high. But…uh oh.

From the start when your ship crash lands, No Man’s Sky immediately goads you into resource collecting. For reference, here’s what you can more or less expect from gameplay:

You can follow the flimsy story of getting to the center of the galaxy, meet a space entity, or just faff about at your own time and pace like I did. One thing’s for certain: no matter how you play, the grind is constant, and you’ll never escape it.

I spent a lot of time on exploration and survival. The other two pillars of gameplay – combat and trading – were key parts of the experience too, but I was more interested in being a tourist in the systems – to ooh and ahh at the scenery, take a picture, and shove off to the next galaxy. I might have enjoyed touring planetary belts more if I wasn’t nagged at so often about my life support and fuel draining; I get it, I’m in space, and everything wants to kill me.

Much of the No Man’s Sky experience is also shaped by luck. After moving on from my initial planet, I would later continue journeying through a string of worlds with horrible climates and poisonous waters; too hot, too irradiated, or too cold. Isotopes I harvested would quickly be used up to restore the protective function of my exosuit. Some places were exclusively home to carnivores, or rampant with hostile insect-eaters that wouldn’t stop chewing on my ankles, and it was particularly difficult when the elements I needed to supply fuel for travel were scarce.

But then there were the more forgiving places – rich in flora and fauna, minerals and geological marvels like wide canyons and deep, colourful caves that allowed me to relax and take my time to enjoy the sight of leviathan-like herbivores peacefully gliding through cerulean skies. Moments like those were what convinced me to stay the course and search for equally therapeutic dwellings

While it makes for a colourful game, I’m not sure if it’s graphically impressive as much as it is just the novelty of being surprised by the visual roulette. It’s a toss-up. You could get lush open plains, or you could get straight up ugly blubbery (the latter is more likely), but it’s nowhere as majestic or polished as what was presented at E3. Textures and lighting feel a little bit unfinished, and animal/alien models look slightly dated, especially up close.

To its credit, the algorithms cook up some really bizarre beasts that keep catalog-ing interesting. It’s like asking a child to draw a monster from their imagination; you’ll get snail eyes stuck onto the spotty purple body of a deer while it squawks and looks for oxides to nibble on.

The idea of stepping into a new world is always fun for me because you never know what to expect. It’s a nice incentive at the start when you’re exposed to everything for the first time, but it wore off for me in about six to seven trips, where the ghost of repetition started to show itself, despite the fact that colour palettes or terrains were never alike.

Case in point; I saw giant bipedal goat creatures with wide bellies on barren plains, then a smaller version of it, albeit in another colour, with similar proportions frolicking in the grassy knolls of the paradise planet I was on. Caves always had its abundance of minerals and glowing fungi, and tree-sized mushrooms would be a map staple. Not the same, yet not really all that much different either.

Again, it’s really a dice throw – sometimes you get the same roll result no matter how much you shake it up in your hands.

The forced grinding exacerbates that repetitiveness. It both drives and perpetually weighs the experience down. Yes, there are a million and one permutations and combinations of animal and plant builds, atmospheric compositions and environmental skins that technically make every new galactic discovery different, but what you do during your time there will be more or less the same – endure the farming process to craft upgrades that get you deeper into the universe.

It’s simple, and so superficial that it quickly grows stale even when we know that there are better ways to take the open world concept to the next level. You learn a language, but there’s no culture. You communicate with aliens, but you never get to know or understand them, where they come from, or who they are. You can land on a planet discovered by someone else, but there’s no way of getting in touch with them apart from helping them add units to their in-game bank account. It mostly feels like a lot of wasted potential, especially when you want to an experience that’s unique to you – whether diplomatic space-cruiser, hardworking naturalist, or menacing robot-provoker – but you’re tied down by your survival chores.

Sometimes the risky venturing or said chores weren’t so bad. After challenging sessions of resource collecting and material crafting, my hyperdrive and pulse engines were successfully fuelled to the brim. Finally piercing the stratosphere and seeing the stars stretch into rainbow lines made the accomplishment feel all the more satisfying – I worked hard, I saw the results.

Other times the mundane and unnecessarily tedious toil of things prompted me to switch the console off entirely. I’m sure the tiny inventory space will be extremely irritating for everyone, but the menus are also badly designed and horrible to navigate. I’m constantly flipping through individual inventory spaces for my upgradable components, but when it comes to uploading all my newfound reports, I have to do so one by one, and I have to press and hold X on arrow buttons just to get to the next page of lifeform info that I want to send to the server.

Perhaps the game’s greatest downfall is, ironically, that there’s little direction or motivation for a player to keep going long-term. If you’re the self-driven goal-setting type, you might find a bit more longevity with No Man’s Sky, but even with that approach, combined with the aforementioned cyclical nature of the game’s mechanics, conquering the open universe of No Man’s Sky could prove to be more laborious than it’s truly worth.

It’s hard to see someone wanting to traipse through hundreds, much less tens, of star systems without purpose. When the game actually gives us one, the premise is ultimately weak and not compelling; we’re told by a foreign entity that we have the opportunity to reach the galactic core if we try hard enough. But why would we want to? Maybe it’d be different if I wasn’t doing it all alone. Or maybe it just takes a bit more effort to work in a loose story so we can find something to root for. For now, the onus seems to be on the player to tweak their mindset and revise their expectations accordingly, and that’s not going to cut it for a lot of people.

You’re still probably going to read several more reviews about No Man’s Sky before you shell out the cash for it. Here’s what they’re all going to say – we had high hopes, but we wanted so much more. Were it not bogged down by its flawed designs and mechanics, it could have very well been a fun space sim that had something for everyone.

It might have helped if it hadn’t given the impression that it was going to deliver adventures of Roddenberry proportions. For the time being, we all remain tethered to its issues (and they are quite damning) until Hello Games decides to improve upon them.

Don’t get me wrong, it’s not an entirely awful game. There are excitement and satisfaction to be had in the exploration if you don’t mind the repetitive tasks and can tolerate the more trying segments of play. It’s only if you have patience to spare and want to see it through to those moments.