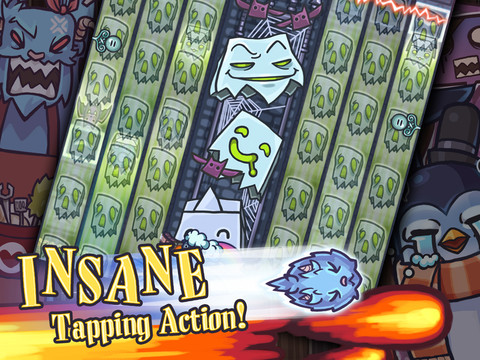 Certain games are just made for a particular type of person. Management sims appeal to the bored soccer mom in all of us, while online poker tempts the card sharks. RPG fanatics nerd out over the possibility of browser-based MMOs alone, and the attention-deficit techie gravitates towards the latest app.

Nightmare Duel, on the other hand, strikes me as a game for arcade goers. Requiring quick reflexes and sleight of hand, this frantic, fast-paced local multiplayer duel game has you sitting across your iPad from your opponent. Via one of eight different, cutely-terrifying characters, you send as many minions, or Dreamlets, as you can towards the enemy, all while sending his soaring back down his lanes.

Flicking forward on each of the game’s six lanes sends your Dreamlet hurtling towards your opponent. The same movement helps you defend against enemy Dreamlets crawling downwards. Each player character also has a ‘super’ unique unto themselves. For instance, awkward salesman Adward Mark Eter can place advertisements over his opponent’s play area to block their vision, thereby messing up their defense. The frightful Nurseferatu Lightningale can instantly speed up all Dreamlets for a super attack, while the fuzzy Incredible Halt stops Dreamlets randomly in the opponent’s area for a most confusing time.

Gameplay is fast, frantic, and quite the challenge even against the AI. Single player mode is accessible via the ‘training mode’ option, though I wish they had named it something more obvious. I first dismissed training mode as a tutorial, and assumed there was no single player campaign! There is no difficulty slider for the game, so you’ll have to either win or die trying.

Nightmare Duel is definitely a multiplayer game; you’ll have tons more fun that way, too. Sitting face to face with your opponent also ups the competitive factor. The game would have made for better solo play if the characters unlocked as you progressed through levels, but for its price, I’m not complaining. I loved best how the game’s characters all had something unique to their names, and weren’t just there for aesthetic value. The character selection layout was reminiscent of a fighting game, with each character’s face boxed into a rectangle.

I can imagine how much more fun this entertaining game (great for parties, too) can get while played drunk. Made in Singapore by GAMBIT Game Lab, it costs just $0.99 on the App Store.