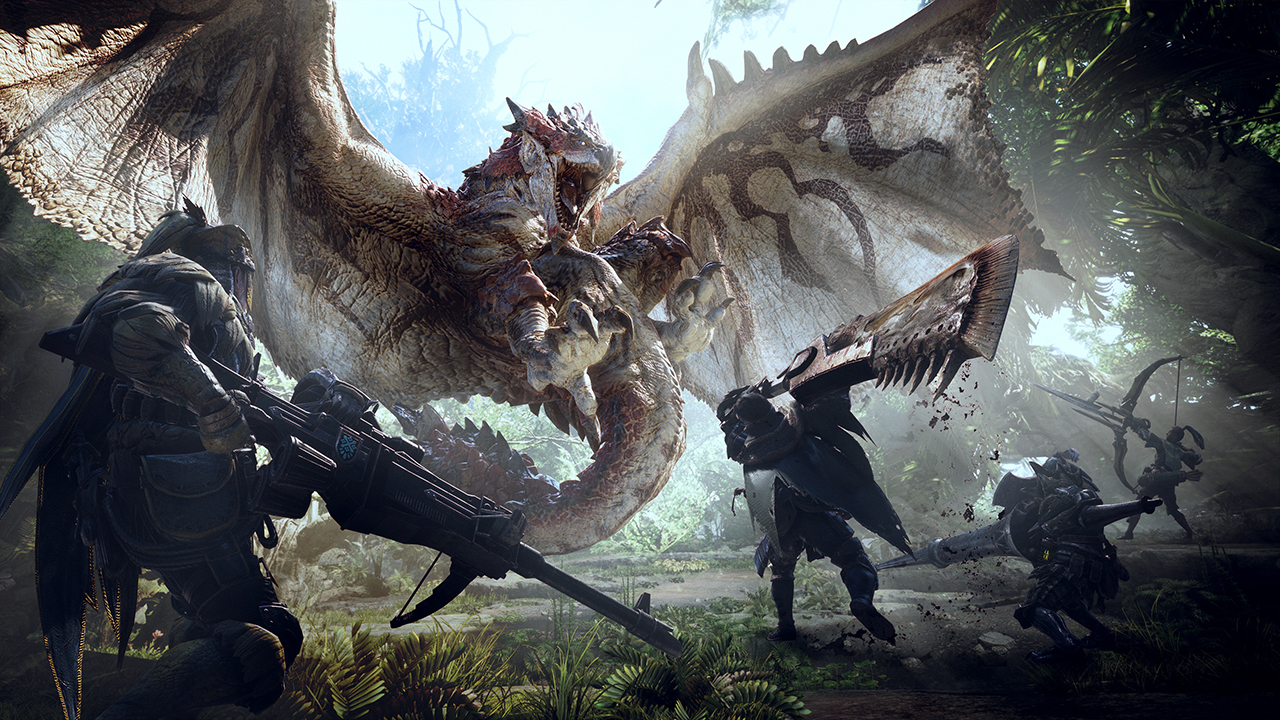 After years of exclusivity on Nintendo’s handhelds and consoles, Capcom’s Monster Hunter finally returns to the PlayStation and Xbox One (and later PC) with Monster Hunter: World. As the next main game in the series, Monster Hunter World has big shoes to fill. The good news is that it does that and more. While it’s a Monster Hunter game at heart, it’s also an evolution of the series in its quest to become more accessible to casual gamers.

Personally, I’ve never been a Monster Hunter fan. I’ve played the games (including the PS2 original) but never got far into them. I usually get bored once I hit Rank 3 or 4 due to all the focus on hunting and move on to other games. So I’m one of those gamers that Capcom is trying to lure in. While I’m still not entirely sold on the series, I can honestly say that Monster Hunter: World (MHW) is undeniably the best game in the series that I’ve played thus far.

MHW is also one of the more cinematic entry in the series. As a Hunter bound for the New World, your journey is rudely interrupted by the emergence of a huge monster called Zorah Magdaros, who separates the player from the rest of the fleet. It’s the first hint you get that MHW isn’t like other Monster Hunter games; the plot is actually driving the hunt, as you journey across the New World doing missions to advance the narrative. You’re actually hunting for a reason this time around, instead of just getting enough materials to get to the bigger, badder beasties.

The story missions aren’t that different from most missions in past games, but the narrative actually helps me to remain interested and invested in the game. One of my issues from previous installments was that hunting is everything to the game. You hunted beasts; you get materials then you hunted bigger beasts. In MHW, you actually have a reason for doing that and it immensely helps when the lure of getting better gear starts to wear on the nerves. As you play, you’ll meet more of the supporting cast and get to know them better. While the story’s pretty basic, the fact that there’s a coherent plot at all is a miracle considering how paper thin the plots of past games were.

Optional quests are usually those given out by NPCs and are side missions to the game. Doing these missions can sometimes earn you exclusive rewards in Headquarters, such as unlocking new dishes in the canteen. These are like (but not to be confused with) Bounties, which also reward you with improvements to the Headquarters (or the maps) when you complete them.

Investigations on the other hand, are more generic hunting quests with randomized rewards that has you killing beasts you’ve encountered before. Failure conditions are present, which can end the mission if triggered. These missions are also finite, as you can only attempt an Investigation a certain number of times. Events (the final category of quests) are online-exclusive time sensitive quests. Capcom promises more Event missions with even more exclusive rewards in the future, so you’ll definitely want to pop in once in a while to see what’s new. As of this writing though, there are just two; Chew the Fat (a rather normal hunting mission which has you taking on some Great Jagras) and Lessons of the Wild, a cross promotional mission with Horizon: Zero Dawn. Beating this nets your Palico unique gear.

If you’re wondering what a Palico is, it’s your kitty companion!

If you’ve never played a Monster Hunter game before, Palicos serve as your minions in base and during missions. In MHW, you can create a custom one and dictate what equipment (weapons, armor and skills) it can use as it accompanies you on missions. Your Palico will gain XP and level up as you complete hunts, making them stronger and their skills more effective. If you’re playing solo, a Palico is a godsend as it can distract a Monster and give you enough time to run, attack or reposition yourself. In fact, they can even heal you if you’re in dire straits.

Of course, one of the biggest draws in the series is going online and teaming up with other Hunters to take down Monsters. MHW doesn’t change that dynamic at all, though you’ll need to understand that the monster’s health scales with the number of players. It might seem weird, but in some fights, it’s better to do them solo than with friends due to the health scaling.

Quitting players are also an issue, especially in light of the scaling. I’ve routinely had Hunters disconnect in the middle of a hunt, handicapping everybody else. It’s weird but I’ve found out that there’s a weird domino effect at play here, as if somebody quits, it’ll not be long before the other two members will quit too. This is in part due to the scaling mentioned above. Imagine facing a monster that’s meant to fight four Hunters with just two people. That’s certainly no fun and I hope Capcom looks into this and implements a dynamic scaling system to address this issue.

One of the biggest changes that MHW brings to the series is that now the stages are all interconnected. While the areas in the older games were previously separated by loading screens, they’re all now seamless flowing from one into another. If you’re tracking a beast, you can now hound it through the areas it moves through instead of it disappearing every time you reach the end of an area.

Not only that, the seamless integration of the areas now make the maps feel more organic as you’re no longer interrupted by loading screens and the monster hierarchies only help to sell that. Monsters now have a credible AI of their own and you’ll routinely see the carnivorous monsters stalking the smaller, weaker herbivores or the big carnivores attacking some smaller ones.

Of course, you’ll need weapons to slay the monsters. In MHW, you’re given the choice of 14 different weapons to use. You can freely choose which to utilize so you can constantly swap weapons to best take on whatever it is you’re hunting.

If you’re unsure of which weapon to use, you can always hit the game’s Training Grounds to master combos and get the hang of them until you find a particular style that you like. Each of the weapons are distinct enough to play differently. The Great Sword is powerful but slow. The sword and shield on the other hand allows hunters to just dive into the fray quicker. The weapons all animate brilliantly. You can almost feel the weight of a Great Sword as it slams into the skin of a monster!

Diving into the fray also seems to be the mantra for MHW, as it introduces the concept of Scoutflies. Scoutflies will constantly scout the area around you, highlighting items you can harvest or monster clues you can discover. Find enough clues and your Scoutflies will gain more experience in tracking down the particular monster. With enough levels, you can use the flies to help you track down whatever it is you’re hunting on a particular map. For those who don’t want to keep running around the map looking for a monster, the Scoutflies are awesome, though series veterans might find that they make the hunts too easy.

Combat with the various monsters are still as fun as ever. As mentioned earlier, your choice of weapons will dictate how you engage them. You’re also given more visual feedback in MHW as your weapon damage pops up as numbers with every hit. This allows you to know when you’re hitting a monster’s weak spot. However, I personally wish Capcom would’ve taken it one step further and introduced the option to display a monster’s lifebar. Purists can leave it off but I’d like to know how close a monster is to death instead of just hacking away and waiting for it to drop dead or limp away.

Grinding is still an integral part to the game. Progression demands you keep your weapons and gear updated and the only way you can do so is to kill the beasts, which drop materials you can use to buff up or create new gear…which you can then use to take on even deadlier beasts and make deadlier weapons. It’s a vicious cycle and a core of the series’ gameplay. Grindings can still get tedious, though the new additions to the game certainly helps to alleviate the tedium.

No matter what though, Hunters will also have access to MHW’s Slinger, a handheld ranged weapon that can fire a variety of ammo that you pick up in the field. Depending on what’s loaded and what monster you’re firing it at, you can get a variety of effects from causing a monster to flee, to blinding it momentarily so you can get a few good hits in. Slingers also allow you to grapple to certain points and interact with the environment to trigger hazards (like rockslides) to even the odds in your favor in hunts. Like most of the new additions, the Slinger fits the game like a glove and opens up even more ways for you to hunt.

MHW also introduces the Mantle to the Hunter’s arsenal. These are unlimited use items (though they have cooldowns each time they’re activated) that give different effects depending on what’s equipped. For example, the first mantle you get is the Ghillie Mantle. Activate it and you’ll be instantly hidden from monsters until you attack or are attacked. Mantles add another dimension to an already complex game, though their addition is most welcome. You’re not forced to use it but mastering Mantles will give you an edge against the deadlier monsters you fight later on. Incredible monsters and spectacular vistas fill MHW, which isn’t a surprise to veterans of the series. Capcom though has taken the whole thing one step further, if you’ve access to a PS4 Pro.

With Sony’s beefed up PS4, you’ll be given the option to prioritize framerate, resolution or graphics. Prioritizing framerate sticks the game to a smooth 60fps frame-rate. Choosing resolution kicks the game into a higher resolution at the expense of frame-rates, while picking graphics increase the shadow quality and number of objects on-screen. Personally, I picked the framerate option and never looked back. The good news is even picking that option, MFW is a good-looking game so it’s win-win no matter how you look at it. Plus, if you have a HDR capable TV, the game supports it too.

The Monster Hunter series has never been known to be forgiving or welcoming to newcomers. Like the Gentlemen’s Clubs of old, it tends to cater to a very specific type of gamer. However, with MHW, Capcom’s gone against the flow and made a Monster Hunter game that’s accessible, engaging and most importantly, fun, for both new players and veterans. If you’ve been put off from trying the series in the past, know that there’s no better time to jump in than Monster Hunter: World.

Sal's just your average hardcore gamer. He started gaming on the NES in the 80s and has been ever playing since. Sal doesn't care about which platforms games are on, only that he wants to play them all!
Previous post Take a peek at the bosses lurking in NEO Impossible Bosses
Next post Review – Dragon Ball FighterZ is how you do a faithful adaptation