Review – Middle-earth: Shadow of War (PS4) is the best LOTR game yet 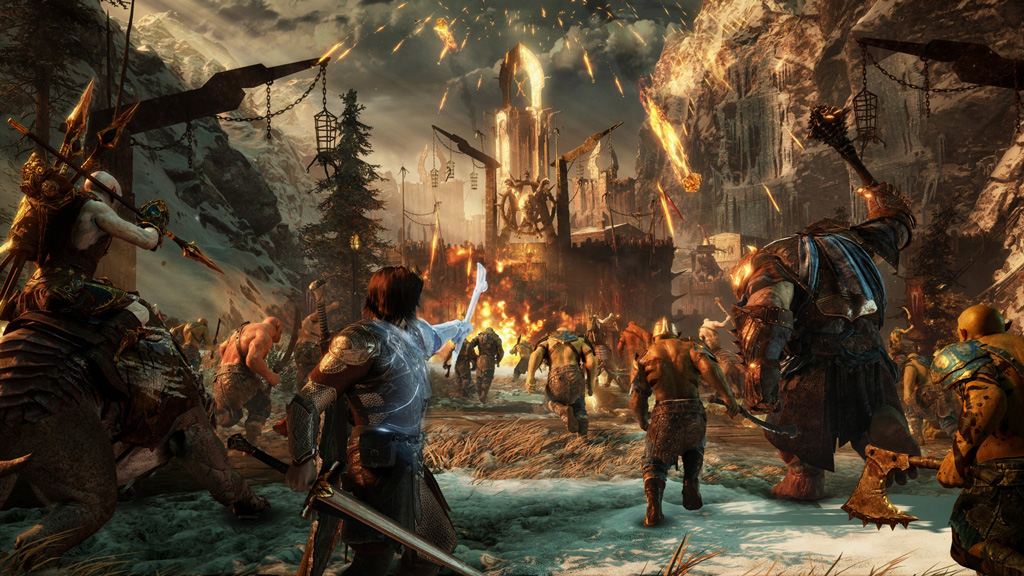 It’s highly unlikely we’ll ever return to the Fourth Age of Middle-earth. If we’re lucky, Hollywood might make movies based on the first War of the Ring. For now, Middle-earth: Shadow of War is the best fix Tolkien fans can get.

Luckily, despite the tremendous liberties the game takes with the Lord of the Rings mythos, it’s still an enjoyable romp through the shadowy land of Mordor.

Picking up where Shadow of Mordor ended, Middle-earth: Shadow of War has Talion and the wraith, Celebrimbor, forging the New Ring to fight Sauron. It doesn’t exactly go as planned and things soon escalate out of control, as Shelob, Gollum, the Nazgul, and even Sauron himself are drawn into the mix. Fan of Tolkien lore will likely balk at the artistic liberties that Monolith took to craft the story, however it should be taken to stand on its own legs.

Shadow of War has multiple regions, from Minas Ithil and its Gondorian architecture, to the lush jungles and dense vegetation of Nurnen. While they’re not as big as the maps from the first game, they combine to create a gameplay area that is much bigger and with more visual variety to boot.

Plenty has been done to upgrade the phenomenal Nemesis system. For the unfamiliar, the Nemesis system tracks your actions against the enemy Uruk captains. Lose to one and they’ll gloat about it when you meet. Cut off a limb and they may return with a prosthetic, looking for revenge. Die to a normal grunt and you’ll inadvertently promote him to a captain. The fluidity and open-ended nature of the system means that no two games are alike. Enemies also don’t just sit around waiting – they have their own agendas, raiding rival camps or dueling to the death. You can gate-crash these events, though they’ll resolve themselves after a while.

Shadow of War jacks it up a notch. Now you can participate in online revenge missions, where you visit another player’s world and try to kill their nemesis. Enemies you beat not only remember past events but may even come back with new equipment, all to take you down. On top of that, there’s an army system where captains you’ve dominated can help you conquer Mordor’s multiple fortresses. You can also give individual orders, tasking them to eliminate rivals, serve as your bodyguard, or to work undercover, ready to backstab their masters at your command. You need to whittle down a captain’s health before you can brainwash them, which uses the same branding skill as before.

As each captain has randomly-determined weaknesses and skills, creating the best team requiring lots of trial and error. It’s extremely fun to watch your painstakingly assembled team crush the opposition; conversely, it’s also painful when one a captain under your wing dies. Even better is the fact that allegiances aren’t static – your own captains may try to backstab you. It’s this pervasive element of randomness that makes the game so damn fun to play, leaving you guessing about your allies and enemies.

Shadow of War has also taken a RPG-ish turn. The skill tree is much deeper, with multiple modifiers per skill. For example, after unlocking sprint you have modifiers that can silence your footsteps or grant a short-range teleport. On top of that, you also get loot in the form of weapons, armor, and ring upgrades. These drop when you kill captains and, depending on rarity, can give further tweaks to your abilities. There is a mindboggling number of ways you can customize your very own Talion.

Combat is incredibly fun no matter your gear. The directional, timing-based action is as fast and fluid as ever, and pulling off counters is a joy to watch and execute. The system’s deep enough to reward skilled players, but easy enough to understand and master that it doesn’t alienate newcomers. You can still mount caragors and graugs, but new to the sequel are drakes that can fly around the map and rain down fire from the sky.

However, all this comes with one downside: loot boxes. Gear and captains are randomized so if Lady Luck hates you, all you get is trash. You can use real money to buy in-game gold for loot boxes, which inevitably brings up the slippery pay-to-win argument. While I can confirm that playing without spending a single cent is more than feasible (you can even buy certain loot boxes with the in-game currency you accumulate), it’s also true that somebody who spends a ton will undoubtedly have better gear and captains than those who don’t. There’s no direct PvP but since you’re allowed to attack other players’ fortresses, it stands to reason there’s a certain unfairness to the whole thing.

Visually, Shadow of War is a step ahead of the original. Not only does the game run on a whole new engine, which allows for more detail and tons more enemies on-screen, it also has more visually distinct locations. On the PS4 Pro, you can choose between prioritizing frame rate or visual quality, just like its predecessor. Even if you choose visual priority, there’s barely any slowdown or screen tearing, with most of the noticeable issues stemming from shadow and object pop-in. Weirdly, Monolith has chosen to prerender most of the cinematics, meaning Talion doesn’t wear the gear you’ve equipped. It’s very disappointing and a major strike against an otherwise visually impressive game. It also falters in the audio department: Howard Shore’s excellent score from the Lord of the Rings trilogy has been replaced by rather generic music. Luckily, voice acting is still excellent, especially Celebrimbor’s.

As a sequel, Middle-earth: Shadow of War is everything that made Shadow of Mordor excellent and more. It expands on every single aspect of the original while still being fun. Although the loot boxes do detract from the experience a tad, they’re not game-breaking and are totally optional. In the end, what it all boils down to is that Shadow of War is an incredibly fun and deep experience, and is easily one of the best games this generation.

Middle-earth: Shadow of War is developed by Monolith Productions and published by Warner Brothers Interactive Entertainment. The game is out now for PC, PlayStation 4, and Xbox One. A copy was provided for review.

Sal's just your average hardcore gamer. He started gaming on the NES in the 80s and has been ever playing since. Sal doesn't care about which platforms games are on, only that he wants to play them all!
Previous post Call of Duty: WWII PlayStation 4 Pro bundle is coming to Singapore
Next post Rumor: Xbox One X to launch in Singapore on 21 Nov?