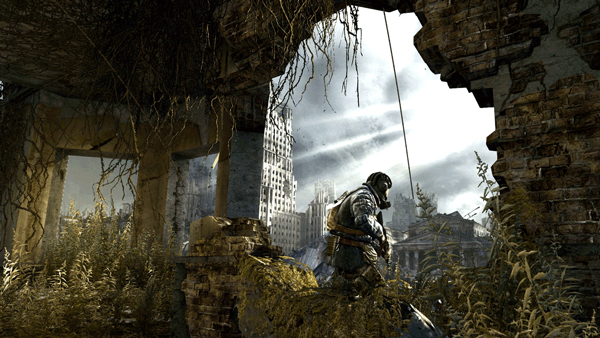 Stepping out from a dark tunnel and into the light is usually a moment of celebration, but in post-WWIII Russia I’ve never been happier to go back underground. Metro: Last Light is a reminder that shooters can still be a tense, atmospheric affair, though it’s the introspective narrative and the solid gameplay that helps make this title a must-play for the year.

Artyom is our returning protagonist, only this time he’s plagued by nightmares. It doesn’t sound surprising given their living conditions, although bad dreams stemming from guilt are the ones that really haunt you. Going into details here would spoil the events of Metro 2033, but those who’ve never played the first game shouldn’t have any trouble catching up.

Metro: Last Light begins in the safety of a Rangers compound. Life almost seems idyllic in here, no different than any other military barracks today. However, it isn’t long before I’m handed a gun and head to the surface, getting a first-hand look at the nuclear wasteland. Pockets of radiation aside, a howling pack of Watchmen (mutated rats/wolves) soon arrive to show just how dangerous things can get.

Talking about gunplay is usually straightforward – either it feels right or it doesn’t. This game gets it and both the rifle and shotgun prove to be a joy. While that feeling was quickly replaced by terror, the sentiment remains. The other weapons end up being fun too, given their unique characteristics and customisation options. Add an extra set of barrels to your double-barrel shotgun or give your pneumatic air gun a scope! If you’re lucky, some enemy will drop the exact configuration you want.

Chances are you’ve heard of the in-game currency, which happens to be military-grade rifle bullets. All the ammo that gets used is pressed in someone’s workshop, thus being of lower quality. Swapping in a magazine of military rounds takes enemies down faster, but you’ll literally be burning through your wallet in no time. I only used them once in my playthrough and even that was by accident – you can tell by the incendiary effect and the heart-stopping shock of watching the bullet counter decrease.

On Normal difficulty, Metro: Last Light didn’t prove particularly challenging, especially as a stealthy player. The game clearly recommends a quiet approach as I can turn off circuit breakers, unscrew light bulbs and blow out lamps; I even have a watch that lights up if I’m visible. Unfortunately, the AI was incredibly forgiving when it came to detecting me, and even then, I had enough ammo to take on a second or third wave. Thankfully there isn’t any of that x-ray vision or tagging nonsense cropping up lately, so stalking a large group is a rewarding mini-game in itself.

The difficulty naturally ramps up towards the end but for the most part, combat is still manageable. If anything, I had the most trouble navigating the surface levels on a few occasions, taking one too many dips in the swamp or just getting hopelessly lost. For the record, Hard mode claims we’ll have to “jealously guard our ammo” due to scarcity but I’ve yet to really put that to the test.

The developers make up for this by having some great pacing between stealthy segments and guns-blazing firefights. There are quite a few (literal) rail shooting moments though these are enjoyable in their own right – it’s pretty good catharsis for all the tension that the metro brings. Make no mistake: the sprawling tunnels have a few terrors of their own. While Watchmen and Demons rule the surface, the metro belongs to a few different factions. There are the Nazi soldiers of the Fourth Reich, with concentration camps and strict standards for race-perfection; the Red Line communists who control the popular Bolshoi Theatre; and the Rangers (Artyom’s group) that now occupy D6, a base rumoured to have large food and medical supplies. A few neutral stations lay between them, while bandits call the tunnels home.

Ultimately they’re all human and don’t pose a threat, unless I suddenly decide to become a bullet-sponge. A few Watchmen make their way into the tunnels too but they’re just jump scares, nothing an adrenaline-fueled session can’t take care of. Rather, perhaps fittingly, it’s the spiders that conjure up the most dread. They’re large, fast and require a good dose of light exposure before they’re vulnerable to attack. This means they only appear in the darkest levels of the game, forcing me to have my lighter out for that extra bit of illumination. And then they drop from the ceiling and swipe at my face.

Not to dismiss the humans, of course, since they’re the central plot to the story. I won’t say much but warring factions are always eyeing ways to gain control. In Metro: Last Light, you’ll undercover a scheme that threatens the lives of everyone, leaving you to chase after certain individuals all over Moscow. It’ll take you across swamps and through a ghost city, which is fine by me because this game is gorgeous to look at.

As far as post-apocalyptic settings go, this is the best there is right now. Comparisons to the vibrant worlds of Far Cry 3 and BioShock Infinite obviously wouldn’t be fair, yet on a technical standpoint Metro: Last Light more than holds its own.

Details are lavished upon and delving into them would take far too long, though I greatly appreciated small things like being able to count the number of bullets left in magazines. On the other hand, driving a railcar and witnessing an incredible storm are just some of the highlight set-pieces this game has to offer. There’s even a moment where drinking at a bar made the patron beside me appear younger and more attractive.

It’ll be remiss of me to not mention the stations you visit, each different from the last. It genuinely feels as if I’m visiting new locations with different cultures, and the Red’s Bolshoi Theater will definitely be a treat. Along with the brothel in Venice Station, they happen to be Metro: Last Light’s animation showcases. As a side note, it’s a shame that the only female stalker you’ll see is Ranger sniper Anna, with most women given to working in the stations instead. Also, the voice acting in general could have been better. It only became an issue during certain dialogues, which sounded stilted and ended up being  a real immersion breaker. There’s an option to change spoken language to Russian at least, which I wouldn’t recommend on the first run.

Initially I didn’t like the ending at all. A short and explosive shooting gallery quickly reminded me of the staleness of today’s shooters, at odds with what the game had been presenting me thus far. The cutscene was bizarre too, taking us away from Artyom’s perspective for the first time. As I replayed the final checkpoint and dwelled on it further, I realised that there really wasn’t any other way around it. The game’s message on the nature of man has been told to us via Artyom’s narrated diaries and many other in-game elements. Only by ending the way it did could that message be hammered home, leaving me to reflect on humanity’s cycle of self-inflicted suffering.

There’s also an alternate ending which you unlock by making good moral choices. If you don’t really care about all that though, then know that Metro: Last Light is the sort of game that’ll get nominated for awards. I sat through it all in one sitting and never did I find myself wanting to stop, even when I got lost in the swamp at night. The game’s blend of mechanics keeps things going for a long time and its presentation (especially on PC) feels like a sneak peek of next-gen’s capabilities. Developers 4A Games have managed to do what THQ was hoping for: rekindle memories of the seminal Half-Life 2. And boy, what a ride.

Note: I need to mention the Ranger Mode DLC, which comes as a pre-order bonus. Else, the mode – which is simply Hardcore difficulty and strips the user interface – will set you back US$5. This was the result of “retail requirements” rather than an intentional move by the series’ new owner, Koch Media. Ranger Mode is being touted as something players want to try on their subsequent playthrough and I can second that notion. Additionally, the in-game main menu has a large Store option so we may be seeing more DLC in the future.

Ade thinks there's nothing quite like a good game and a snug headcrab. He grew up with HIDEO KOJIMA's Metal Gear Solid, lives for RPGs, and is waiting for light guns to make their comeback.
Previous post Sony Finally Shows Off PlayStation 4 Console, If You Squint Right
Next post Review: Dead Island Riptide (X360)