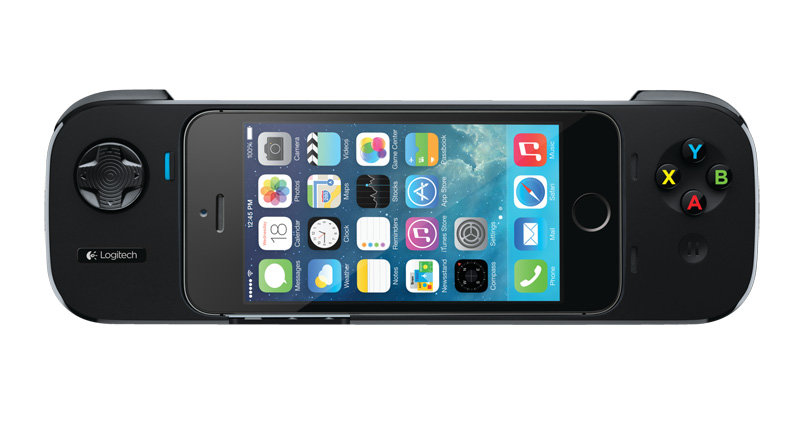 Logitech’s latest Apple accessory is a retro-styled console controller that swallows your iPhone and provides physical buttons for playing games. Touchscreen devices are fantastic for tapping out an email, browsing the web or even the occasional Angry Birds. But try playing complicated games and it all gets a bit fiddly. And with ever more narrow and compact devices it can be difficult just to keep a firm hold of the device while your fingertips are otherwise occupied.

The PowerShell aims to solve both these problems, as well as a third: the iPhone’s pitifully short battery life when gaming. As well as physical buttons and a nicely solid lump of plastic to grip, you also get a 1,500 mAh battery that will top-up your iPhone as the game drains it.

It’s designed to work with the iPhone 5s, 5 and fifth generation iPod touch, but we can confirm that the 5c will fit snugly inside as well.

On the left you have a four-way D-pad and on the right you have A, B, X and Y buttons, with left and right shoulder buttons on the top. So far, so traditional – think SNES, not PlayStation 4. But many newer games such as Grand Theft Auto use two directional controls, so one of these must remain on-screen as without the case – not ideal when using a peripheral specifically designed for gaming.

The buttons on the right-hand side worked well, but the D-pad was average – control isn’t as fine as you would hope. Playing Streets of Rage, an action fighting game, our characters’ movements weren’t smooth at all. Turns out that we could have better control using the touchscreen – and we have had similar experience with other games too. Having paid a good S$129 (Editor: there is a special $89 offer at this week’s IT Show 2014), one can’t help but expect better.

This is a shame, because the device is extremely well put together and feels like it would survive easily as long as your current smartphone, which, because it’s made for a specific model, is a realistic lifespan.  Even if the material and feel of it did felt a bit plasticky, and, dare we say, cheap?

For instance, because the headphone socket is blocked by the case, Logitech needed a workaround. Rather than connecting a new socket to the device via the Lightning port, which supports audio, they just left a long tunnel and supplied a long headphone socket extender which will inevitably get lost and leave you stuck with silent gaming. Perhaps it was meant to make production cost lower, and hence, more affordable. But, still.

One other problem is that not all games are supported, only those designed to communicate with these “Made for iPhone” games controllers. And if you’re browsing the App Store looking for new games, they rarely tell you if the games are designed to work. All we could do was look to Logitech’s website for a short list of compatible games and try one or two of those.

We could put up with these foibles if the case was half the cost, but at S$129 it has to offer a lot more than it does. It just needed more thought and refinement. Hopefully Logitech would have learned and craft out a superior successor model in the coming months for the iPhone 6.

Aaron Yip is an industry veteran with more than 15 years of experience. When not spending time on his gaming PC and consoles, he can be found in Hyrule solving ungodly puzzles and collecting gems.
Previous post GameMaker Studio is Free
Next post Pac-Man Museum Cancelled on Wii U and 3DS