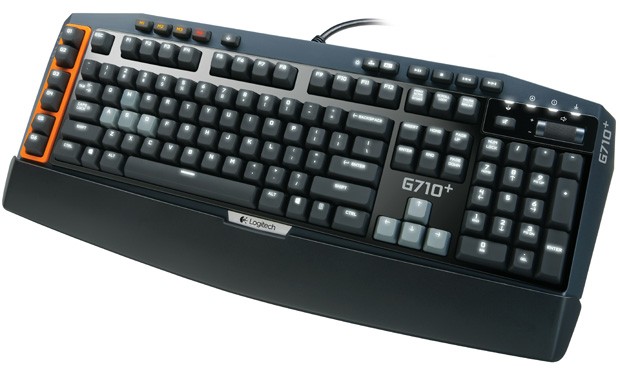 Until the emergence of Razer, Logitech was a dominant power. The features and sheer durability of its mice and keyboards, especially its G-series, lead to a loyal following.

Now, however, not only are brands like Razer dominant, but newcomers like Corsair and even GIGABYTE are producing remarkably competitive gear. In Corsair’s case, it’s even designed by ex-Logitech staff! So the new range of Logitech gaming gear has not only a legacy of quality to live up to, but stiffer competition than ever before.

The G710+ is the new flagship, a mechanical keyboard with an aggressive yet subtle gaming edge. It eschews bright colours and extraneous design elements, but still looks like something you’d be proud to own. Its body is made up of gloss plastic and matte gunmetal grey, with silver WASD and cursor keys, and a burnt orange highlight for the macro keys. It’s a solid design, that looks and feels like it can take a fair bit of punishment, and is heavy enough to sit firmly on the desktop during even the most punishing of gaming sessions.

However, it doesn’t sound solid. The keys have a hollowness to them that is not only louder than we’d like, but plain distracting. On top of that, the mechanical action feels less… reliable than other mechanicals we’ve used. With such keys being more popular than ever, and peripheral makers buying batches of keys faster than they can be mode, it must be assumed that some keys are going to be better than others, and that’s the impression we get from the 710+. Which is odd, because after the usual breaking-in period, it really does type fine, and gaming is certainly no better or worse than our current favourite, Corsair’s Vengeance K-series boards. With the ability to customise the lighting both of the entire board and the WASD keys, reliable macro functionality, and impressive solidity, it’s definitely a great effort.

But, for us, still not quite the top of the line. If you’re in the market for a new keyboard, and the design appeals, you won’t feel sorry.

Aaron Yip is an industry veteran with more than 15 years of experience. When not spending time on his gaming PC and consoles, he can be found in Hyrule solving ungodly puzzles and collecting gems.
Previous post Review: DmC: Devil May Cry (PS3)
Next post Singapore's SEA Major 2013 a Go For Road to EVO