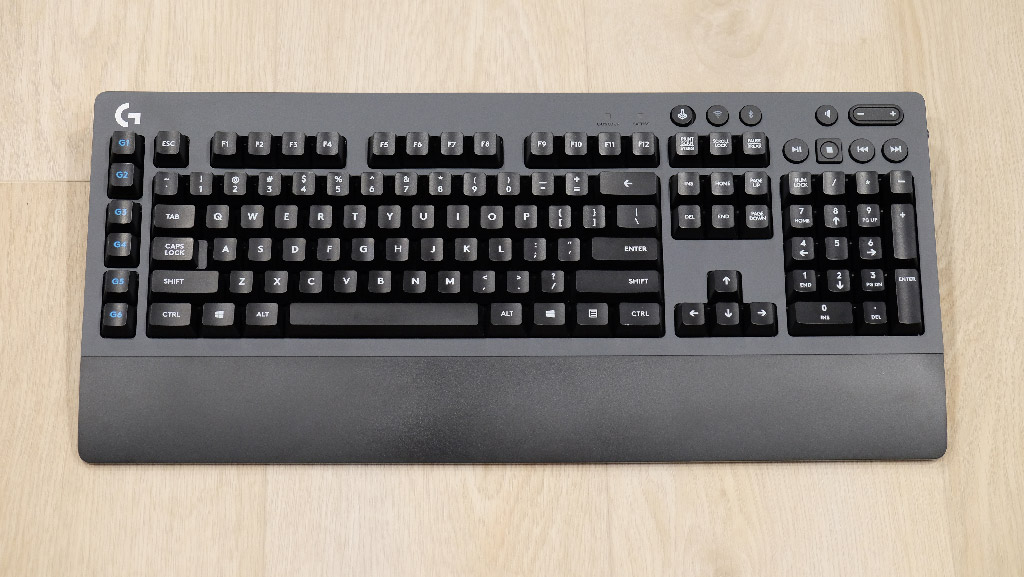 The Logitech G613 wireless keyboard were made for those who hate cables. The setup process for the keyboard was blissfully simple – plug the dongle in and flick a switch, and voila!

I’ve no way of verifying this, but I can say that the keyboard feel responsive and reliable. I didn’t experience any latency issues, and I could have sworn I was using wired devices.

You’ll also get a convenient extension cable that you can plug the dongle into, just in case you need to place it closer to the device.

They transmit in the 2.4GHz band, which is used by everything ranging from wireless routers to cordless phones, but it seems like companies have figured out how to circumvent these issues. I marveled at the stellar wireless performance on the G900, and Razer has since gotten on board with its own Adaptive Frequency Technology (AFT) that works great as well.

That said, it’s a good thing that the keyboard perform as it does, because there’s no way to use it in wired mode. The keyboard run off a pair of AA batteries, but Logitech is claiming months-long battery life for it, so the idea is that there’s no need to constantly worry about recharging the G613 either.

Still, I should point out that its stellar wireless capabilities aside, these are fairly no-frills products for those who just want a functional, practical device. There are no fancy RGB lights and the G613 is decidedly plain-looking, which could be a boon or disappointment depending on your personal preferences.

The G613 keyboard is one of the first keyboards that I’m aware of to properly combine mechanical switches with wireless operation. I’m discounting keyboards such as the Filco Majestouch MINILA Air because that only uses Bluetooth, which definitely doesn’t perform as well as a connection made over the 2.4GHz band.

The good news is that the G613 is both a solid mechanical gaming keyboard and wireless peripheral. It uses Logitech’s Romer-G switches and Cherry-style stabilizers, which feature a very slight tactile bump and are probably closest to Cherry MX Brown switches.

I’ve actually never been a fan of the Romer-G switches, as I find they can be quite fatiguing to type on over long hours. Having said that, the switches on the G613 feel different, although Logitech didn’t highlight any changes that it made. It’s difficult to describe, but the switches now feel crisper, and I like them better than those on other Logitech keyboards such as the G Pro.

The different feel could be attributed to any number of reasons, and things like the keycaps and base plate can affect how you perceive the switches. And despite its mostly plastic construction, build quality feels solid, and there’s little if any perceivable flex to the keyboard.

Unfortunately, the spacebar has a tendency to get stuck, so my triple-jumping Hunter would suddenly find it a lot harder to reach the highest platforms in Destiny 2’s Eater of World’s raid lair. Nevertheless, this is the first time I’ve encountered this with the Romer-G switches, so it may be that I just have a slightly deficient unit.

That aside, this is a no-nonsense keyboard for those who want a simple wireless gaming keyboard that works. It’s priced quite reasonably at S$159, so you’re missing the usual bells-and-whistles such as RGB backlighting or the ability to program macros for the entire keyboard.

There is no backlighting of any sort here, and while I’m willing to forgo the RGB customizations, it would have been nice to see at least a single-color white backlight to help those who work in low light.

You do get a row of six programmable keys to which you can assign custom commands in the Logitech Gaming Software, which is definitely helpful. However, it adds to the bulk of the keyboard for those who don’t need them, and I’d much rather have had the ability to reprogram some of the other keys instead.

I complain about the added bulk, because this is really quite a large keyboard. It measures 478 x 216 x 33mm, thanks to the aforementioned macro keys and the integrated wrist rest.

The latter feature adds still more girth to the G613, and it practically precludes the use of any other wrist rest. I actually have a wooden wrist rest that I use with all my keyboards, but I can’t use that with the G613. That said, there’s nothing wrong with the integrated wrist rest, and it does its job well enough.

You’ll find a bunch of media controls at the top right of the keyboard, including buttons to toggle Bluetooth mode and Gaming mode. Everything is laid out clearly and is super easy to access, so you really shouldn’t feel like you’re missing anything.

However, the trifecta of dedicated macro keys, wrist rest, and media buttons, and the way they’re implemented, give the impression of a keyboard that’s trying to include all the key features it can think of in the simplest manner possible.

It’s not particularly elegant, but it sure is functional, and it’s difficult to find fault with it at this price. This utilitarian approach isn’t for everyone, but while keyboard enthusiasts may be unimpressed, less demanding users will find themselves quite satisfied.

You don’t have that many wireless, mechanical keyboards to choose from, so if you’re in the market for one, this is a decent bet. However, if wireless functionality isn’t a priority, there are definitely better keyboards out there. After all, while the G613 has excellent wireless performance, it’s not going to be winning any design accolades. Hopefully, this is just the first of similar products to come from Logitech and other brands, and we’ll see more refined and polished designs moving forward. And if that happens, Logitech will deserve plenty of credit for getting the ball rolling first.

In short, if you’re looking to cut some cords without having to break the bank, the Logitech G613 wireless gaming keyboard will serve you well.

Squee delights in trash talking on Overwatch and sleeping till 5pm on weekends. Few other things matter, except perhaps the next episode of Game of Thrones.
Previous post Vainglory unveils its long-awaited 5v5 mode
Next post Dragon Ball FighterZ gets an open beta on 13-16 Jan