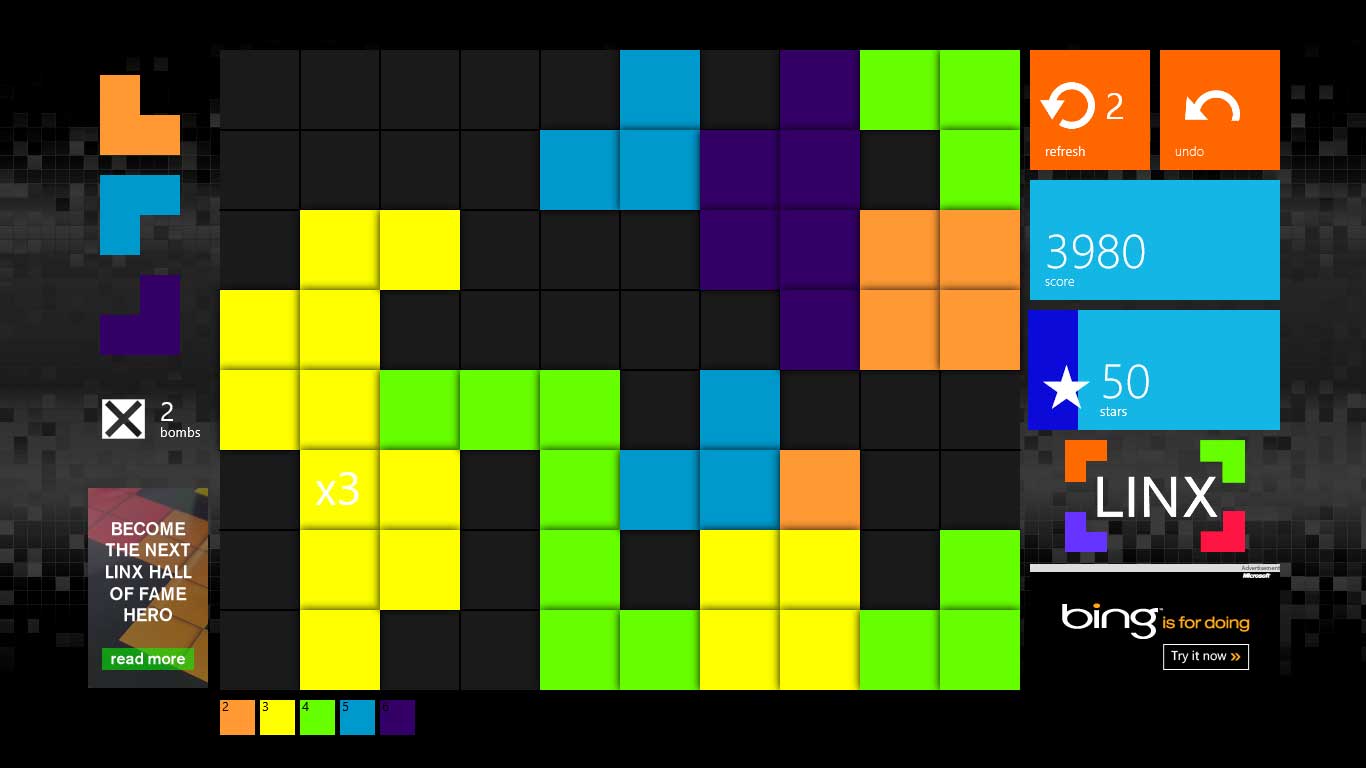 Most mobile games are made for when you’re on the go. They fill up moments in your life that are too short for flipping open a book or sliding out that 3DS, but are long enough so that checking your email doesn’t quite suffice.

Predictably, most of these games are forgotten just as quickly once your bus arrives, or your number is called at the doctor’s.

Linx, on the other hand, is different. A low key, slow paced, Zen-like game, this colourful puzzler has you linking up coloured blocks. Though it’s a Windows 8 game, it can also be played on the table; in fact, I feel it’s best played on the tablet, especially while curled up on a nice, long, rainy afternoon.

In Linx, you form rectangles of the same colours transforms them into new L-shaped links of a new colour, and the cycle repeats itself. With up to 256 colours, the potential gametime for Linx is endless.

One of the launch day apps for Windows 8, Linx seems to have found longevity simply because it’s not a bite-sized game. Requiring more than twitch reflex or the careful nurture of dragon-shaped pixels, the strategy you invest into playing Linx is what makes the game work for longer than a game of its genre should.

The game’s drag-and-drop playstyle is easy to get used to. Available options like the undo and bomb buttons are clearly displayed, though I thought it could have used a ‘reset’ button. A game in Linx doesn’t end until you fill up all squares on the map, even when you don’t have any legitimate moves left. Stricter lose conditions could probably improve Linx’s pace, because I, for one, want to be able to start a new game the moment I run out of moves, rather than drag and drop to my heart’s content.

The background music of Linx is by Singaporean indie artists, and there are plans for DLCs for it – though nothing has been put out onto the Windows store yet. The free to play game is available for download here, and is reportedly being ported to the Android platform first, before moving on to the iOS.

With endless replayability and zero cost, Linx is the perfect game for a relaxing night in.

Previous post Alienware Arena Now Open In Heart of City, And Has Free Play To Celebrate
Next post The Armaggeddon End of the World Gift Guide