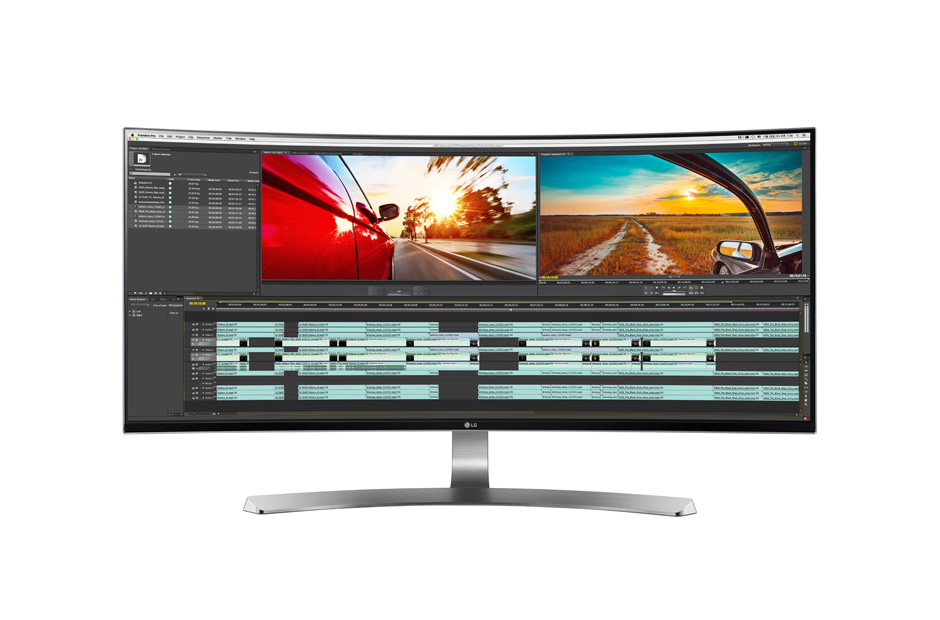 Of all the fun technology that passes across our test bench, nothing brings coworkers to a screeching halt more effectively than an ultrawide monitor. Even among hulking 4K panels and sleek 2-in-1s, the 21:9 LG 34UC98 draws the eyes of all who walk by, and it isn’t hard to see why.

Not only does the massive display measure an impressive 34 inches diagonally, but it boasts 3,440 x 1,440 pixel resolution, plus FreeSync, the adaptive display tech built into AMD video cards. The real estate doesn’t come cheap, though, and your paycheck will have to be as wide as your desk to afford this S$1,599 monitor.

The LG isn’t the only ultrawide vying for your money. Samsung and Dell have offerings at a similar, or lower, price points. Buying one of these mammoths is a major investment, but is this LG the right choice?

A screen this wide needs a stand just as broad, and that’s an area where LG delivers. The heavy metal stand curves below almost the entire width of the screen itself, with a thick post that runs up to the screen. Unfortunately, the stand only allows the panel to raise or lower, and tip forward and backward. Some pivoting would’ve been a nice touch for connecting cables, although the Samsung S34E790C has a similar stand, and only the Dell Ultrasharp U3415W offers a full range of motion.

It must be difficult to build a bezel and housing for such wide display, as evidenced by some quality missteps in the LG. For one, the silver casing that surrounds the bezel looks thick, but bends with a light touch. The white plastic on the back is the same story. It looks nice, but doesn’t feel premium. The display has heft to it, largely thanks to the stand, but it would’ve been nice to see that follow-through on the screen itself.

With no shortage of space for ports, LG has made sure to pack in as many as possible, and it definitely pays off. In a cluster of plugs on the back you’ll find two HDMI ports, DisplayPort, and a pair of ThunderBolt 2.0 ports. That seems an odd choice, as we’d rather see the newer Type-C or ThunderBolt 3. It also acts as a USB hub with two USB ports – and one of them has increased power for charging devices too.

It’s not that the menu options are confusing. Most of them are in properly named categories like “Picture” or “Quick Settings.” The problem is that many of the on-screen display menus have several options, and it’s not always clear what each choice in a list does.

Take the “response time” menu, for example. You would think this on-screen display option would allow a user to balance fast response time with display quality or backlight strength. The options are Low, Medium, High, and Off. Which of these options improves the response time? Which is the best for watching a movie? What does “off” even mean in this context?

Despite some labeling weirdness, the LG’s on-screen display controls are some of the best I’ve worked with from an organizational standpoint. The controls are responsive and large, sub-menus are many, and the actual options are extensive, albeit not always clearly labeled. There are preset picture modes for reading, photo editing, watching movies, working in the dark, and then game modes for first person shooters or real time strategy games.

Overall, the LG is a joy to use right out of the box. Its high resolution and wide, immersive panel help make up for the middling contrast ratio and black levels. Movies in 21:9 are larger than life, and games that support ultra-wide resolutions are much more impressive at 3,440 x 1,440 than in standard width 4K.

If you’re looking to invest in an ultra-wide monitor, get ready to face some big headaches in choosing the right one. Samsung, LG, and Dell all have solid offerings in the S$1,300-$1,600 range, and the only factors that set them apart are price and included features. All three are solid options, although only the LG has Thunderbolt and AMD’s FreeSync features, making it the slightly better choice for Mac users or gamers. There’s also the excellent Acer Predator X34 that is available for $100 lesser and comes with FreeSync too, but without Thunderbolt.

The LG isn’t a bad monitor by any means. Its panel is remarkably similar to that from Dell and Samsung, and it even offers some advantages over them, like better color accuracy, and a wealth of screen customization options. But the LG’s price is a major limitation. Only the most hardcore gamers will want to pay more for just FreeSync or Mac users for Thunderbolt, and that makes the LG tough to recommend until the price falls more in line with other screens.