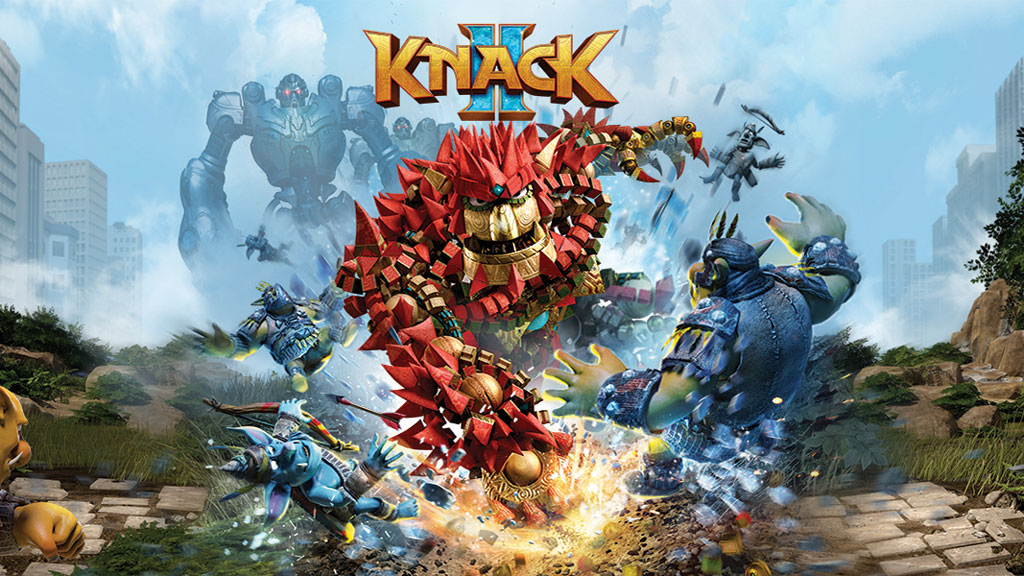 Knack 2 begins a few years after the first game and cuts right to the action as the city of Newhaven is attacked by a mysterious new foe. This serves as a rallying cry for Knack to return to action, which you’ll do through 15 chapters.

You’ll be jumping between platform, running under rock crushing machines, climb ancient ruins…pretty much everything you’d expect to do in a platformer. Yes, there’s even a level set in a mine, an ice level and a forest level. If there ever was a checklist for generic platforming levels, Knack 2 would have every single box ticked.

Knack’s unique claim to fame is that he’s a bit like Katamari. Knack starts off small but as he gathers blocks, they join up with him and this increases his mass. Over the course of the game, you’ll be playing Knack at various sizes, from his usual minute self, to a huge, Godzilla-sized version. The game may not do a lot of things awesomely well, but one thing it does get extremely right is the sense of scale. Tangling against the various enemies as your normal size is a challenge but when you’re bulked up, it’s massively fun swatting the previously fearsome foes (who are now tinier when compared to Knack) around.

Changing sizes plays a big role in the game as you’ll constantly be ditching the extra mass to fit into tiny platforms, hidden crevices or environmental hazards. Mini-Knack is best for platforming and exploration, while Big Knack is most suited for combat. It’s cool to watch all the bits and pieces Knack has surrounded his tiny body with just slough off at a touch of a button. It looks awesome, the physics work great and there’s barely slowdown even when you do it with tons of action happening. The mechanic comes into play with the different puzzles in the game, though I wished these were much more in-depth and involved. One nice touch is that the game shows you how to get past these puzzles or any section that troubles you by drawing you the solutions on-screen. It’s great for younger audiences, or those who get easily disheartened at failures.

Knack 2 also borrows some RPG mechanics that were present in the original game. You have a massive skill tree that is divided into four sections, and it’s here where Knack will gain most of his powers. From faster dodging speeds to completely new moves, the skill tree will keep providing you with new moves throughout the game. This means that the combat also gets deeper as you progress. While initially shallow and boring, Knack’s evolving move list soon gives you a myriad of options to take on foes, and it’s fun to experiment with everything at your disposal.

The gadgets from the previous game also return, although only those who truly explore the environment (or those with guides) will find them all. You can now also rope in a friend to play Knack 2 to get gadgets, as you’re given the option of which gadget part to get every time you find a chest. Since your loot from each chest is random, having more friends means having more chances to get what you want. It’s a unique mechanic for sure. The game is clearly meant for a younger audience too, with its simplistic, colorful visuals and character models. The frame rate is generally stable on a PS4 Pro but there are hitches here and there, especially when you change sizes while there is a ton of things happening on-screen. Character models are simplistic, though some of the enemies do have a certain charm to them. It’s a nice touch that enemies lose parts of their armor and weapons as you hit and damage them.

Human characters look incredibly bad though, as do the backgrounds. Both are bland and uninteresting (which can also be applied to the audio) and the static camera angles only make matters worse. In fact, it can be argued that Knack’s worst enemies are the camera angles. Awkward, jolting and distracting, the camera angles, and its perpetual sudden shifts in views, can make the game frustrating at times.

Knack 2 isn’t a bad game overall. But if you love platform games, there are way better games out there such as the superior Ratchet and Clank. The recently released Sonic Mania also shows how awesome 2D platformers can be. Knack 2 has some interesting ideas and mechanics going for it but ultimately, is hard to justify a purchase when there are better games in the market.

Knack 2 (PlayStation 4) was reviewed on the LG OLED C7 Television.