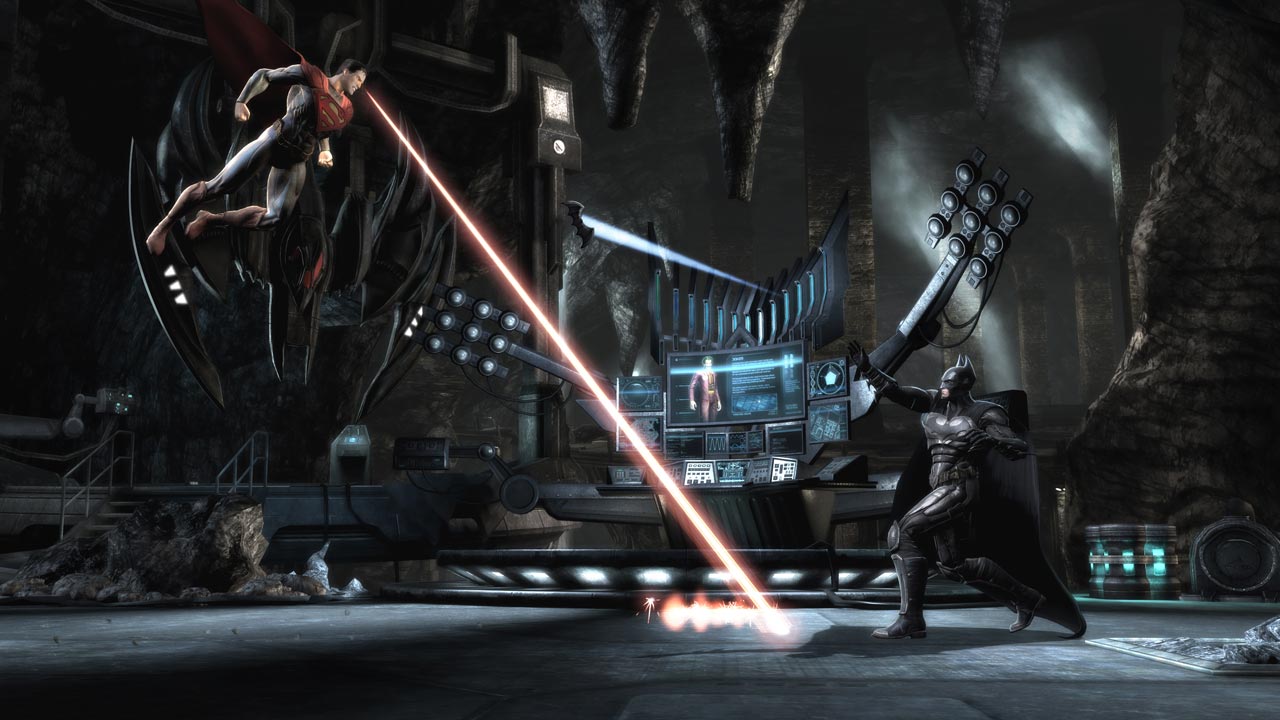 You know how when you get tired of making your DC action figures pick on The Joker all the time and then you turn the heroes on themselves? It’s kinda like this.

From the developer of Mortal Kombat of 2011, comes a fighting game that brawls a hefty group of heroes and villains from the DC Universe. Injustice implements the DC Multiverse in its well thought-out storyline, although the rest of the game is still pretty much your regular fighter in a myriad of DC franchise locales.

Injustice’s story mode brings players in an alternate universe where our heroes have been strewn into disarray since the Joker went nuclear on Metropolis, and really cheesed Superman off. Our alternate universe heroes take sides on Superman’s One World government and Batman’s Insurgency to stop his menacing ways. Luckily enough, the Insurgents have the chance upon the Justice League from our universe and warps them over for backup, but the parallel counterparts don’t like having impostors around.

Pre-rendered cutscenes will play out to walk players through the pretty compelling story, itself littered with little quick-timed mini-games and will smoothly transition into an upcoming fight as the camera pans out between the two involved. Standard fighter fare applies here. Light, medium and heavy attacks are assigned to three face buttons with the last used for hero’s/villain’s character trait, such as Batman’s little flying bat-bots or The Flash’s ability to slow time to imitate his super-swift movement.

As the story moves along, players will take control of various other characters as their part of the story unfolds through their eyes, serving up a variety of character play while not deviating away from the show. And since not all superheroes are created “super”. Some, like Lex Luthor and Batman are gadget heroes with their several toys on hand and fights can turn out differently against those who with real superpowers.

Fights will break out in several locations such as the Batcave, Atlantis, or The Watchtower. A lovely part of the game is the interactive environments fights take place in. The environments that crumble along with your brawl consists of unique elements allow players and their AI opponents to kick their adversary into the background or grab a nearby interactive object to slam it on them with a tap of RB. Strong hits on the edge of the arena will also send them flying into the lower deck of the environment for utter humiliation and extra damage.

Giving and getting punches fills up the meter on the screen and having a full meter will unleash a special attack on their opponent, and successfully landing the first hit will fully translate into a full blow. If a desperate need for a health boost comes up, players can unleash a clash and wager a part of their meter for a percentage of health back.

I have been going on about the story mode but that is where some amount of praise I would love to give to that. Folding two universes into each other needs to make sense, and NetherRealm has done a great job working with DC in producing that while staying true to what the DC heroes would truly be like. No real Superman of our universe would be so irrational as to want to defeat a Batman that badly. It is the story that somehow justifies that and makes it all plausible. Its length, however, can mean some moments when the game will feel repetitive, despite taking on a new character.

This is in part to its lovely roster of DC favourites, from the general roster of the Justice League of America to its extended family revolving around the Green Lantern, Shazan, the Green Arrow, Hawkgirl and the Teen Titans. The villainous roster demands the likes of The Joker, Harley Quinn, Deathstroke, Lex Luthor and Sinestro. A noticeable imbalance from the characters of the “weaker sex” disturbed me, as I pummelled Harley Quinn and Hawkgirl into the ground without as much effort as say, The Joker.

But a Mortal Kombat game this is not. There are no finishes and the defeated character shows no sign of unconsciousness, much less death, playing well to its ESRB Teen rating. But needless brutality is not required of this game, which I found to be great for anyone capable of pulling off key-combo commands.

Pulling out of Story mode will allow the game to offer plenty else on the single and multiplayer sides. Battles mode allows you to defeat the entire roster or go heroes or villains only, as well as plenty of other flavours in battle such as having a poisoned health bar that erodes. S.T.A.R.S. Lab offers over 200 challenges for the players to mash the right keys too or complete a certain set of combos against a given opponent. Not to mention the usual single or co-op versus experience. There’s also plenty to unlock with your attained experience points, as well as through the “freemium” Injustice iOS companion app.

Injustice: Gods Among Us will pull DC universe fans in with a well-weaved storyline and the other sights it has to offer, allowing such fans to draw their non-DC friends in and have them a copy for themselves. It doesn’t show its complexity if you don’t want it to, and is pretty accessible a fighting game to have around.

Injustice: Gods Among Us (X360)
THE VERDICT: BUY IT

Injustice: Gods Among Us is a NetherRealm Studios game for WB Interactive on the Xbox 360 as well as the PlayStation 3 and Wii U. Also condensed into an iOS app on the App Store.