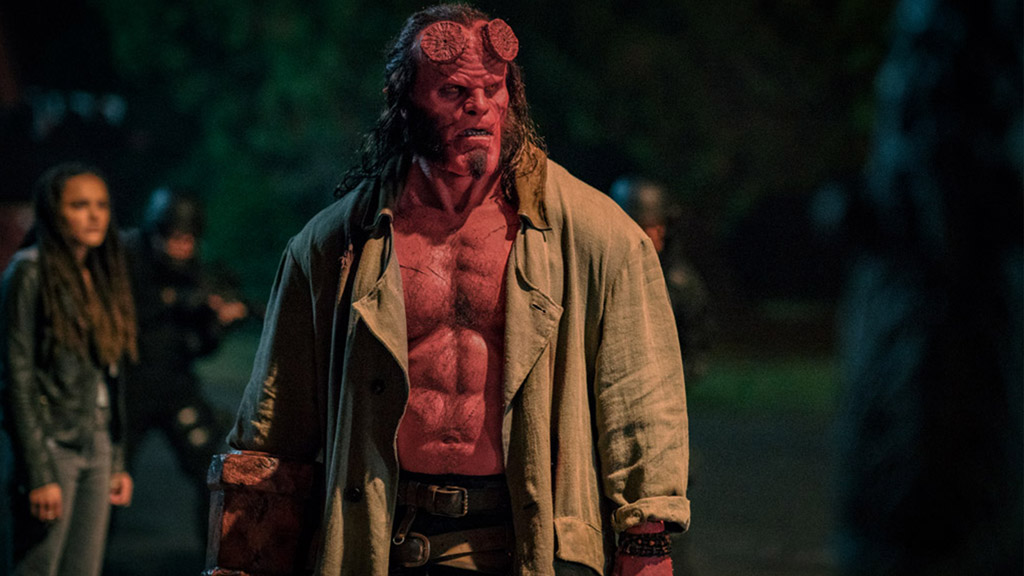 Hellboy has a lot to prove. It’s releasing in a time densely packed with big blockbusters such as Shazam!, Avengers: Endgame, John Wick 3 and even Detective Pikachu. One might think this movie is doomed to be buried under such heavy hitters, but I believe Hellboy is an interesting combination of genres that might just have what it takes to rise above the rest. See, it just so happens to be a horror movie… and a superhero movie.

The story goes like this. Hellboy, working for the Bureau for Paranormal Research and Defense Department (henceforth referred to as B.P.R.D. until Agent Coulson graces them with a better acronym) is summoned to England to fight a trio of rampaging trolls, but through a series of twists and turns, finds himself facing off against the bringer of the apocalypse herself, the resurrected Blood Queen, Nimue. World-ending stakes ensue, and Hellboy is in the unlikely position of being the last bastion of hope humanity has left, before it is quite literally devoured and torn apart by senseless, mindless creatures from Hell.

The film’s unfortunately generic plot is bolstered by strong performances from the main cast, particularly David Harbour as Hellboy himself. In a complete departure from his iconic role as Chief Jim Hopper in Stranger Things, Harbour is almost unrecognisable in his role as Hellboy. And I mean that quite literally, as he seems to be hidden under several pounds of makeup and prosthetics. Still, he makes the role his own, which is no easy feat after Ron Perlman’s memorable spin on the character in the Del Toro movies. 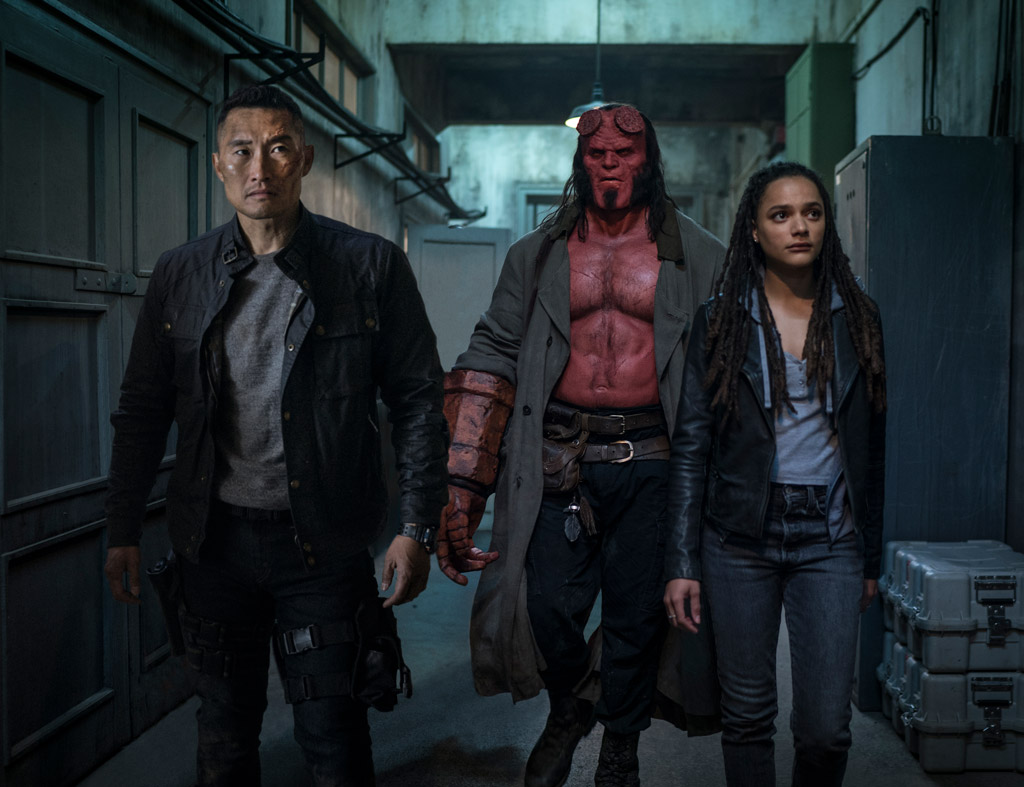 Daniel Dae Kim of Lost and Hawaii Five-O fame plays Ben Daimio, a military member of the B.P.R.D with some alarming anger issues. The actor seemingly does his best with the role but is simply not given enough to work with. This issue extends to the rest of the main cast as well, with Sasha Lane playing Alice Monaghan, an old friend of Hellboy’s, and Ian McShane playing Trevor Bruttenholm, Hellboy’s adopted father.

Each character has perhaps a scene or two to shine in the two hours of the movie’s runtime, making the most important emotional character beats in the film feel rushed or unearned. Most of the time, they’re just around as supporting characters in Hellboy’s story. One could say that’s how it’s supposed to be, this being a Hellboy movie and not a Daimio movie, but I can’t help but feel disappointed at the wasted potential in the talent of this cast. Despite the lack of good writing to accompany the characters however, the actors do shine through their roles.

The story itself often seems either rushed or too slow, never quite finding the right pace for its runtime. Characters’ backgrounds and emotional stakes are explained within a minute, and somehow the movie expects us to care about what might happen to them later. Scenes between Hellboy and his adopted father are the most promising of all, with the emotionally absent father obviously caring for his son much more than he can show. Unfortunately, they just aren’t given the screen time they deserve together, and their relationship falls to the wayside in the larger scope of the film. 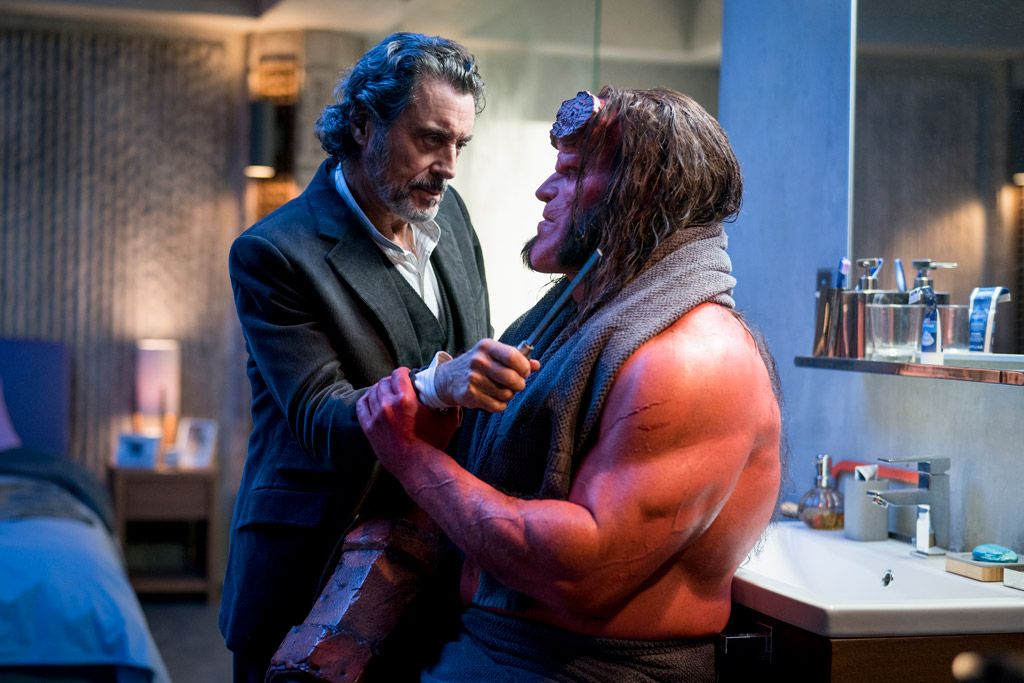 However, there are some truly great positives to be found in Hellboy. Action sequences are very well done, with two striking one-take shots being particularly impressive to me. One of them was even set to Muse’s ‘Psycho’, so we can add great soundtrack to the list of positives. There is gore aplenty in this movie as well, and I suppose to some that may be a negative, but I was pleasantly surprised at how much this movie embraced its ‘R’ rating. People are hacked to bits, flayed, split in half, stabbed, beaten and crushed in this movie, and those are the lucky ones.

The visual effects accompanying all of this are spectacular, making use of practical effects for most of the monsters and corpses, and they certainly look gnarly enough to make you cringe when you spot them in action. The monster designs in general, perhaps the most important part of a Hellboy movie, are fantastic. Director Neil Marshall absolutely knocks it out of the park in the horror department, which makes sense considering he previously helmed The Descent, another particularly good horror flick.

And calling back to what I mentioned earlier, what I find interesting in this movie is that it seems to function as a superhero origin movie of sorts, and when I look at it that way, I find it in a much more favorable light. It tells the tale of Hellboy, from birth to adulthood, pitted against a ancient villain by the cruel hands of fate. He’s a man split between two worlds; that of hell and earth, forever cursed with feeling misplaced in every situation but the ones that require violence from him. 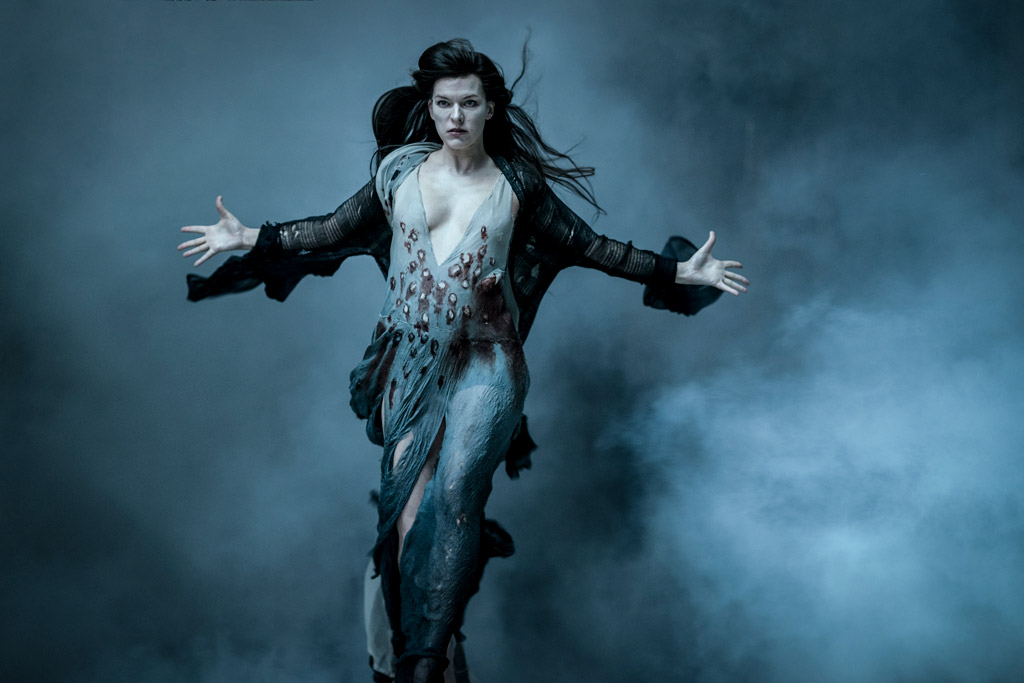 Killing monsters and saving people is quite literally in his job description, but this movie has him rethinking everything he has known and done. Is he really killing monsters to save people, or is he killing his brethren to save his enemies? Nimue the Blood Queen tells him that he’s been doing the latter, and Hellboy is unable or reluctant to disagree. His true allegiance, she says, should have been with the monsters all along.

All superhero origin movies are character studies. Their job is to get us invested in the hero’s world, and the colorful characters that populate it. They oftentimes throw in a half-hearted villain, just as a test for the hero to overcome and find out what they truly fight for. Hellboy is no different. Albeit tinged with some large amounts of darkness and horror, it’s a classic superhero origin movie in disguise, introducing us to a fascinating world filled evil bloodthirsty things and the heroes that hold them back for humanity’s sake.

Although it doesn’t quite make good on its premise, Hellboy still proves itself to be a unique horror take on the superhero genre in this time of summer blockbusters, and certainly one entertaining enough for me to see twice. If you enjoy gore, spooky monsters and creatures of hell raining down upon the Earth and smiting every one of us with an utmost lack of mercy, this is certainly the movie for you.

Tim loves all sorts of things. Movies, TV shows, video games, comic books, cats and all that good stuff. What doesn't he love, you might ask? Minestrone soup. It is truly awful.
Previous post Check out the latest teaser trailer for Overwatch’s Storm Rising event
Next post Sony finally reveals details on PlayStation 5