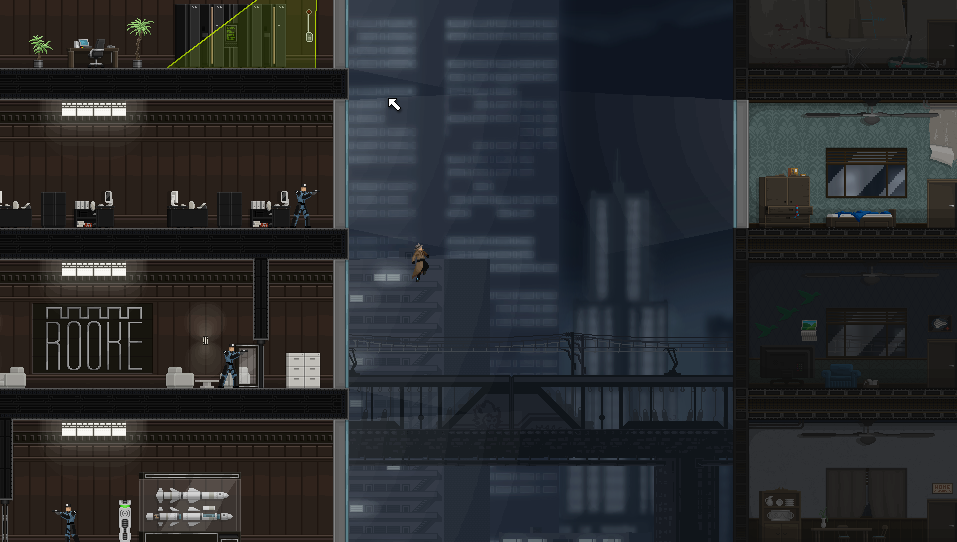 Hey, you. I need you to help me turn off the lights, freak out the guards, nab a secret document and jump out this window.

The first of my indie picks of the year has arrived. Gunpoint by Tom Francis. Gunpoint wraps stealth, platforming and well-timed puzzle action around the world of a freelance spy who may or may not be accused of committing a murder. But really, the story can be set aside for later.

Again, you’re Richard Conway, a freelance spy, so you’ll be hired to do stuff by people you may or may not need to trust. Our objectives vary from hacking a terminal or picking up something from a highly-secured building, or so it seems.

With your Dropshot fall-breaking gear, you can’t break your legs from a high fall a la Portal and you can launch yourself to the side of a building to climb on. Standing in your way are the guards. These range from your minimum wage cops, to the bulky enforcers to the guys in the suits who, strangely, aren’t as invulnerable as the enforcers.

You can pounce onto unsuspecting guards with their backs turned and punch them stupid, launch them off the building with you out the window, or just brought out of the way non-lethally by turning off the lights or sounding an alarm, causing them to panic and start walking around.

Beyond the basic stealth (or glass-breaking unstealthy) stuff, Gunpoint is all about the Crosslinking. Crosslinking involves rerouting switches and triggers around the level to have them control other things. For example, a lightswitch can be rerouted to open a door, or have a camera to spot you and the lights go off on the next floor.

Crosslinking can also make solving the level needlessly complicated, such as routing a connection to a motion detector to call a lift to the third floor, which will trigger a sound detector to turn off the lights so the guard will open a locked door.

With every mission, the game gets ever more difficult and less straightforward. And you won’t ever make the developer’s par unless you do really, really good, but there aren’t any penalties when you take your time. Your various clients do request that you hack stray laptops, don’t kill anyone or leave no witnesses alive.

New ways to play are then introduced as you get your cash payoff with the completion of each mission. You can get upgrades that make your falls and glass smashes silent, dodge bullet fire, make use of live power sockets or even have a gun in your hands (take that, non-violence).

Not much so in the earlier levels, there are really many ways you can fulfil your objectives in the later levels, which can make you realise that maybe you didn’t need to kill that guard or how to reach that laptop in the locked room and come back later for a perfect A+ rating on every level.

Again, the storyline isn’t much, but the game sums up on itself by making you use everything you’ve learnt in the process of gameplay. The game can be finished in about 3 hours, which doesn’t sound like much, although you’ll be able to keep your fancy new boots and kick doors down to cheat on earlier levels.

All editions of the game come with a level editor, which prints out level data onto a text file for you to share around. Being on Steam, it’s a shame that it doesn’t utilise Steam Workshop for custom level distribution. Other special editions of this game also include the soundtrack, developer commentary and even the beta levels.

Gunpoint is a very much a unique title in the world of stealth-puzzle gaming, and is just as entertaining from beginning to end. Get it off Steam for achievements and help keep it alive on the charts or through their website for a DRM-free version, earn them more keep and get a second copy on Steam anyway.

GUNPOINT (PC)
THE VERDICT: BUY IT

Gunpoint is an indie stealth-puzzle game by Tom Francis. Available in DRM-Free versions off and on Steam for Windows PC.