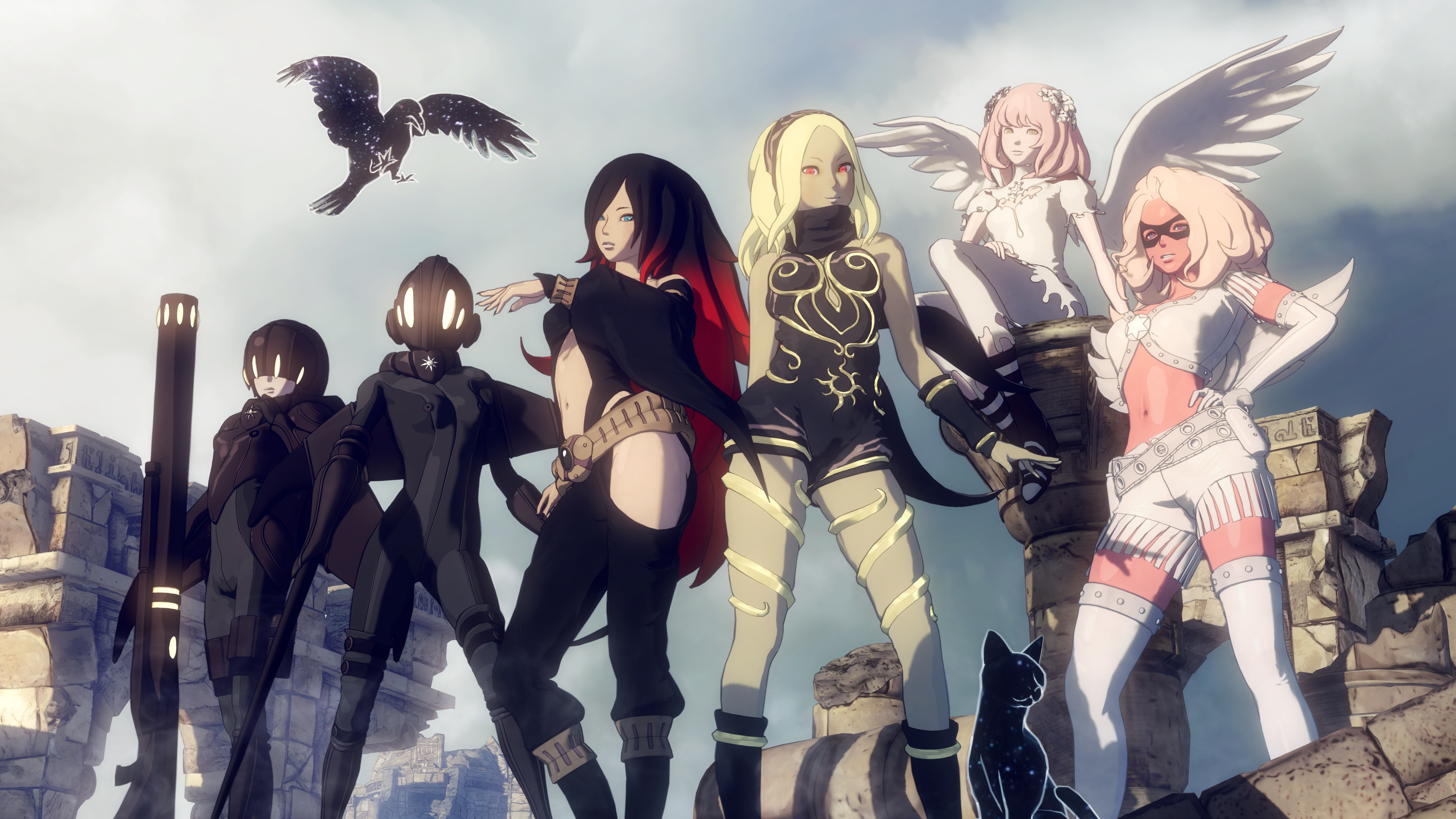 You’ve played open-world games before but not quite like this. Just as Spider-Man 2 invoked web-slinging joy between the towering skyscrapers of Manhattan, Gravity Rush 2 elicits the same starry-eyed wonder as Kat hovers and falls through various floating cities. It’s an experience that burns itself in one’s memory, an act aided by the delightful cast of Kat and company.

That ‘2’ at the end does come with some baggage. For some, this will be their first brush with Team Gravity’s work, a sequel to what was originally a PlayStation Vita exclusive (that gem has since been remastered for PlayStation 4). Will you need to play the first game? Not necessarily, although it would make Gravity Rush 2 more enjoyable. As for returning fans, the leap to home consoles pays itself off exactly the way you’d imagine.

I’ll admit that my love affair with Gravity Rush 2 didn’t start on a good note. Picking up where the first game left off, gravity shifter Kat is now coal miner Kat. A gravitational storm has separated her from Dusty, the otherworldly feline that channels her powers, leaving our loveable protagonist stuck in the Banga mining settlement with Syd. As they plan their return to Hekseville, the settlement soon comes under attack by the Ne’vi.

Here’s where I’m a little torn on the matter. On the one hand, I love that Gravity Rush 2 drops all basic worldbuilding, jumping right into the new plot and action without breaking stride. Yet someone diving into director Keiichiro Toyama’s universe for the first time will find that there’s plenty of gaps that they’re going to have to fill, and the only way to do so is from playing the first game.

I normally wouldn’t worry about it – the mantra of a good game or movie is always “show, not tell” – but the characters do play a strong role in the series. An optional plot synopsis or montage of the first game is curiously absent, and while there is a YouTube animated series called Gravity Rush – Overture, it commits the same mistake of introducing all the key players with little to no backstory. Their relationships are better nuanced when you consider their history, and I think that’s going to be something that’ll weigh on a newcomer’s mind.

That being said, this hiccup doesn’t sour the rest of the magic. Kat eventually reunites with Dusty to open up Gravity Rush 2’s gameplay. What makes it different from, say, InFamous or Saints Row, is the very real sense that you’re falling rather than gliding or flying. It’s disorienting with just a touch of panic, and I actually had to put the controller down a couple of times.

However, Kat is the princess of gravity and practice makes perfect. It won’t take long before you’re juggling the R1 and L1 buttons to float and slam into the ground, onto the side of buildings, under bridges, or best of all, right at an enemy’s face. If you thought you’ve seen all an open-world environment had to offer, wait till you see it upside-down.

And what an environment it is. Moving to the PlayStation 4 has allowed Team Gravity to improve draw distances and expand the map by 2.5 times. I’m not one to gush over map size since it boils down to quality over quantity, and Gravity Rush 2 does have of areas you’d see and forget; nonetheless, they do incentivize exploration.

Scattered throughout the area are challenges and side quests that serve to test player abilities and develop Jirga Para Lhao, a new port city. There are even new online features for added longevity, such as treasure hunting or ghost challenges (time trials). But what really gets someone to check every nook and cranny are the collectible gems, both a public power source and the key to Kat’s upgrades. Unlike the first game, these only go towards improving her combat abilities; her other attributes are tied directly to the story and side missions. We had hard limits the last time anyway, and I tended to max out the gravity powers first, so I’m not bothered by this change.

New in Gravity Rush 2 are special gems called talismans, which can be equipped for certain buffs. They lean towards flavor than substance at the end of the day but it is a nice personal touch. The true game-changers are Kat’s ability to create projectiles from her environment – simply launch chairs and tables at foes rather than relying on the gravity kick all the time – as well as new gravity styles they’re calling attribute tunes. Swiping up or down on the DualShock 4’s touchpad activates either Lunar or Jupiter, lowering and increasing gravity’s effects respectively. It’s the one addition I adore the most, improving navigation and combat in a way that linear stat upgrades could never achieve. Other than modifying Kat’s speed and attack power, they alter her gravity throws as well, allowing players to better respond to the situation.

One of those situations would be the boss fights. If you’ve seen or tried the demo with that mech in the marketplace, then I’m pleased to say that the rest of the bosses are just as varied and entertaining. Thanks to the fact that Kat can do more than just gravity kicks, each encounter calls for a different approach, even calling the dodge button into service more often.

My only gameplay critique is that Gravity Rush 2 is excessively fond of taking away Kat’s powers. I can see where it makes a narrative impact but most instances simply leave me confused. Why take away the single, most identifiable trait that makes the game unique? Of course, I say that before mentioning its production values. I don’t normally go into this for most of my reviews but, sometimes, it’s worth writing about. Gravity Rush 2 has plenty to love in this regard, from an art style influenced by esteemed French comic artist Jean Giraud to an excellent live soundtrack by Kohei Tanaka.

The first Gravity Rush didn’t have plenty of graphical power to work with but it captured attention with its city. Hekseville is a mish-mash of architectural styles, of buttresses and pipes, that somehow manages to seem realistic at times, as if recalling a foreign city through the hazy fog of dream. It helped that everything was a maze-like stack that basically floated through the air, with players spending most of their time falling through it.

Jirga Para Lhao, while more colorful, captures that same intention. It’s a joy to witness when taking a break from all the gravity-defying jaunts, contemplating the wild circumstances you’re in. This intersection between fantasy and reality is reinforced in Team Gravity’s choice for language, a heady blend of Japanese and French that I basically gave up trying to pick apart – I’m sure all the qualified linguists out there would do a better job (and maybe find issue with it).

As a music person, however, I’m head over heels for the soundtrack. It’s steeped in horns and strings, guitars and piano, swinging from the rousing melody of its title theme to the light rock of its battle music. Not forgetting the track you’ll repeatedly hear in town, a soothing fusion of styles that brings to mind various locales – just like the game’s environments.

Also, there’s a jazzy vocal rendition of a certain song fans would be overjoyed about.

Gravity Rush 2 is a dream come true, shifting Kat and friends away from niche obscurity to directly under the PlayStation 4 spotlight. That hardware transition brings its unique world and gameplay to new heights, advancing the mystery of Kat’s origins and widening her arsenal against the Ne’vi.

2017 has been absolutely front-loaded with Japanese releases, including Yakuza 0 and the mighty Resident Evil 7 biohazard. Whatever you do, don’t let Gravity Rush 2 fall by the wayside, because it promises an adventure you’re bound to remember for life.

Ade thinks there's nothing quite like a good game and a snug headcrab. He grew up with HIDEO KOJIMA's Metal Gear Solid, lives for RPGs, and is waiting for light guns to make their comeback.
Previous post Holy Potatoes! We’re in Space?! launches on Feb. 15
Next post Impressions: Halo Wars 2 Blitz, the stepping stone to RTS